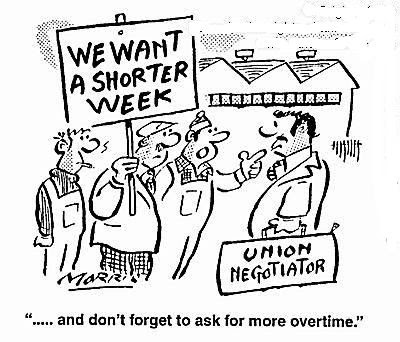 How did the idea of the weekend come about ? This is an article by Vic Vanni taken from the Socialist Standard April 1972 explains

FROM MONDAY TO FRIDAY the weekend is the time most of us look forward to. This is the time for living it up or taking it easy, and so well is this recognised that numerous books and songs have been written and films made which deal with this theme. Indeed "the weekend" has become one of the most important social institu­tions in modern society. Life without Saturday night and Sunday morning would be unthinkable for most people and yet the weekend is only one more institution which, like any other, is evolutionary in character and must eventually disappear.

Just as the legal and political institutions of a society must correspond to the needs of that society (more accurately, of its dominant class) then so must the insti­tution of leisure. The weekend can only have any real meaning in capitalism: it didn't exist in feudalism and certainly won't exist in Socialism.
In feudalism production was largely agricultural so time off work was partly governed by the seasons of the year. Even so, the Church made sure that many holidays (holy days) occurred in winter when work in the fields was often impossible anyway. And the idea of today's summer break would have been ridiculous in medieval times as summer is when work is most needed in agriculture. Modern industrial society requires its work to be carried on throughout the year as the market knows no seasons and it has the artificial means (fac­tories, mills, etc.) to do this. Indeed, lost working time in capitalism is usually caused by purely social factors - slumps leading to redundancy are an obvious example.

The Church, as the most powerful social and political institution in feudalism, decreed when and how many holy days should be observed. In medieval England and, right into the 17th century, the Catholic countries of Europe there were over a hundred holy days a year on which no work could be done and Church courts in­flicted fasts and penances on those who broke this law. Further opportunities for leisure were provided by the many Fairs at which the known world displayed its wares. Eileen Power describes in Medieval People how Bodo, a Frankish peasant in the time of Charlemagne, and his family looked forward to these Fairs although their real purpose was to provide essential trading out­lets in an age of poor communications. Obviously they have little relevance to modern society and have been replaced by the airborne travelling salesman, the tele­phone, and the manufacturer's prospectus.

Medieval holidays took place irrespective of the day of the week they fell on. The Church was powerful enough to see to that. And they didn't follow the mechanical two consecutive days-out-of-every-seven pattern like today. Rather they occurred in conjunction with important social, religious, and trading events like feast days and Fairs. In capitalism holidays have to coincide with the demands of industry - whereas May Day traditionally fell on May 1, today it has been rele­gated to the first Sunday in May. In other words, times for living it up in feudalism happened when there was an excuse for it. They were times for dancing and drink­ing, sport and lechery, with the clerics wailing that more sin was committed on holy days than on any other. We can confidently say that medieval leisure (or recreation) was geared to the productive forces and social relationships of feudal society.

Meanwhile, as the merchant class grew in strength and power it could see that the medieval system of holidays was incompatible with its need for an ideology fostering the regular working habits required by the new manufacturing system. The cry that England's allegedly weak competitive trading position was due to the "misspending of our time in idleness and pleasure" occasioned by holidays and absenteeism is not the pro­duct of the mid-20th century but of the early 17th.

With the triumph of capitalism over feudalism and the consequent further weakening of the Church's power, the holy days were steadily eliminated until by the 1830s they had almost vanished. Holidays for much of the new-born working class meant, apart from Sundays, only Christmas Day. The same trend affected office workers too. The Bank of England closed for 47 holidays in 1761, 40 in 1825, 18 in 1830, and 4 in 1834. In Italy, where the Church is still powerful, the remaining Church holidays are coming under fresh attack and legislation is being prepared to rearrange these for the convenience of industry.

The long term effect of such harshness was that many workers used Sunday to drown their sorrows in and the resulting over-indulgence in alcohol produced wide­spread absenteeism. The shrewder of the employers saw the way to combat this and even rejuvenate the workers by providing more recognised holidays. The 60 hour week in the 1860-70's produced the Saturday half holiday and by 1878 the term "weekend" was in use. Next came secular holidays unconnected with reli­gious festivals and with dates specially picked to suit industry. In the 1890's came summer holidays when whole industries closed down for a week with many workers spending the time away from home. The week­end which we now take for granted -Saturday and Sunday off - was not widespread until after world war two [this writer, employed in engineering, didn't get it until 1948] and was due to the improved bargaining position of the workers caused by full employment.
Leisure as we know it today is the product of a modern industrialism which compels a division of labour within the factory and at the same time gathers all the work of the plant into a unified production process. Similarly, whole industries with their many plants and diverse component units become an integrated network. All these industries are linked together on a global scale so that all the workers directly or indirectly engaged come under this single dominating influence to which they must co-ordinate their use of time. This is why we have the weekend and why we all take our holidays together-to fit in with the requirements of those who as a class monopolise industry - the capitalist class.

Obviously, the way we spend our leisure has changed with the passing of centuries. In feudal times recreation was associated with participating in physical activity such as sport, dancing, etc. Today it means paying to watch others do this, going to the pub, or, more likely, watching TV. But there is an important similarity be­tween the two ages in that both were societies in which men's labour was controlled by a ruling class, so they usually hated their work. Up to the present day work and recreation have been strictly segregated and con­sidered to be mutually exclusive.

But must this always be so? After all, there are some people, even in capitalism, who enjoy and even live for their work. This is especially so when they have some control over what they do and when the work is useful and stimulating. This will certainly be the case in Social­ism, a society of production for use with everyone own­ing and controlling the means of production and dis­tribution in common. People will be able to indulge in work that is engaged in from choice because of the enjoyment and satisfaction which it brings and is not subject to the compulsion imposed by the wages system. What people today call work may well be regarded as leisure or recreation in the future. So even our very concept of leisure changes along with changes in the economic basis of society. Certainly no regimentation of leisure such as today's weekend represents will be tolerated in a free society like Socialism.

If the reader looks around him today he can see that this is not so far fetched as it may seem. Already there is an evolution away from the weekend idea. The in­crease of rotating shiftwork has made many workers dissatisfied with fixed leisure time by giving them a taste of something different. Also, the growth of "Flextime" where workers may report for and depart from work within certain limits is an indication of their desiring and achieving more control over their own time. These developments should mean that workers hearing the socialist case aren't required to mentally bridge such a wide gulf between the practices of capitalism and of Socialism. Our task as propagandists is made easier by developments within capitalism which erode fixed ideas about the world.

V.V. Socialist Standard April 1972
( thanks to Peter H , Glasgow Branch for scanning )
Posted by ajohnstone at 2:45 am