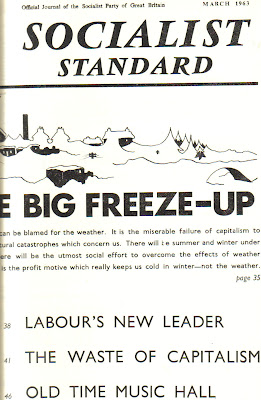 As many readers shiver , SOYMB thought it might be appropriate to post an early Socialist Standard article from a previous exceptional cold spell experienced in the UK , an article which despite the years still holds relevance .

The recent Arctic spell has seriously tried Britain's power and transport systems. Many people argue that these services have been found wanting, and the Opposition demands to know why the Government has not increased the number of power plants to meet any heavy demand which is likely to occur every decade or so. Government officials state clearly that much expenditure would result in idle capital, because plant might not be needed for long periods. These two words "idle capital" sum up the whole situation. They explain why the lights go low, the coal cellars remain bare and hospitals have no emergency power units at times of climatic misbehaviour.

Our ruling class does not like good money tied up in empty factories, shutdown railway lines and unused power plants. Production of power is based on a market of average consumption over a given period, with due allowance for increased demand or declining use. This dominates the volume of investment and to demand additional plant and maintenance when it is obvious that no profit would be forthcoming from such little used power is horrifying to any capitalist or to those who administer capitalist society. So when our climate plays havoc with statistics and averages, millions have to suffer inconvenience and some are even reaped in the grim harvest of death and injury.

Many other things which come to a halt in freeze-ups bear baleful testimony to the effects of the profit motive. Plumbing, exposed to the elements, because generally it was expensive to enclose, bursts and floods homes with grim monotony. Gas mains fracture and people die because even after years of heavy use not enough has been spent on trying to remove the lethal danger from coal gas. Railway points become frozen stiff and are tackled by methods that are known to have only partial success in a damp climate. Why is this? Because effective methods are expensive and a railway system already in debt cannot afford anything better. Travellers will have to wait, not just for a cure, but for one that is cheap. Roads become like ice-rinks and councils struggle along with inadequate and limited cleaning equipment, all the time keeping their eye on the cost. Ratepayers have votes, and expenditure is political fireworks at election times. Even the half million regular out of work, swollen by weather conditions to over 800,000, are not brought into use. Extra labour means extra wage bills and extra tools and machinery. What profit after all can be made out of masses of men on snow clearance? For the administration such work is just a financial but necessary drain, although makers of snow clearing equipment selling to realise a profit have other ideas. Thus we have the spectacle of unemployed men turned away from Council yards while pavements remain frozen and dangerous.

And the fiasco goes on, one section of capitalists trying to keep down the costs while another, such as the insurance companies with claims now running into more than £18 millions, urges future expenditure and safeguards. One joke in the muddle is the collapse of the smokeless fuel supplies as a bitter east wind blowing over capitalism's cities makes a jest of the planners' smokeless zones. In the meantime, workers line up for a pittance at the labour exchange or a pram full of coal at the sidings. The Press, to divert our grumbles, pours out pints of journalistic ink with sad stories such as that about Buckingham Palace being blacked out for eight minutes.
True, no politician can be blamed for the weather. It is the miserable failure of capitalism to face up to natural catastrophes which concerns us. There will be summer and winter under Socialism. There will also be the utmost social effort to overcome the effects of weather extremes. It is the profit motive which really keeps us cold in winter—not the weather.

No credit is given for this Editorial.