Slowly does it - The Case for Reformism 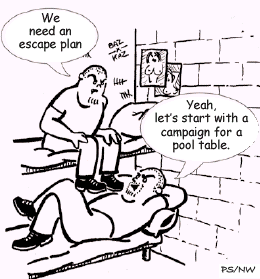 I think I'll become a reformist. Change soci­ety a bit at a time. Erode the edifice of social misery, gradually but surely, and make the world a better place to live in.

It's all very well these revolutionary socialists telling me that the only way to end working-class problems is to abolish the whole system of world capitalism and intro­duce socialism, but I can't wait for that. Something needs to be done now. If we sit around trying to persuade workers of the need to abolish the cause of their suffering it could take ages. No, I want action now. To­morrow morning I'm going to sign up in the heroic struggle to reform this evil system.

What shall I start with? I know, I'll begin by dealing with the worst problems and then work my way down the list to the little insignificant ones. My task for the time to come is to deal with the real biggies. War. Mass starvation. I might even deal with the homeless and slum-dwellers if I've got a bit of spare time. And the Third World - I'd bet­ter lend a hand in supporting them. Oh, and I almost forgot about pollution, I must make sure that something is done about that. Good. Now I know what my immediate aims are all I need to do is get on with the action.

Right, war. What is the practical way for us reformists to end war? Well, let's be prag­matic - we won't end all wars, but we shall certainly abolish all nuclear weapons. How? To begin with we shall establish a mass movement made up of people who think that nuclear weapons are "a bad thing". Then the government will be forced to lis­ten. True, such a movement has existed in Britain since the late 1950s and it is now larger than ever and the governments have not been forced to accept our demands and most of our members voted to elect the governments which have not accepted our demands, but that must not dispirit us. Hav­ing built our mass movement we shall un­leash our unstoppable tactic: we shall have a march every year from Hyde Park to Trafalgar Square and we shall shout slogans (very loudly) like "Ban the Bomb" or "Jobs Not Bombs". Let them try to ignore that! Well, yes, they have ignored that in the past, but that is quite evidently because there weren't enough of us marching. In addition to that tactic, which will leave us all feeling like a big movement which cannot be ig­nored, we shall do other practical things like holding hands around Greenham Common and sitting down in the middle of the road in Hampstead. Of course, we must be prag­matic about abolishing nuclear weapons: we would be prepared to settle for a nuclear freeze, I suppose. That means that they keep all the nuclear weapons which exist in the world today (enough to blow us all up several times), but no more can be pro­duced. That would be an achievement. True, there have been more people killed in the non-nuclear war in Iran and Iraq than were killed in Hiroshima, but we must not allow ourselves to be diverted into side-is­sues. We reformists like to deal with the big issues, like the possibility of a nuclear war in the future, rather than these petty wars which are going on now. (Although I have made a note in my diary to join a campaign to deal with Iran and Iraq - and Ireland - and Israel and the Lebanon - and Afghanis­tan - and Central America - just as soon as I've solved this nuclear problem.)

After all, the danger of a nuclear war is by far the greatest problem facing humanity today. Admittedly, Oxfam does claim that thirty million people are dying now as a re­sult of starvation every year. And hundreds of millions of people are living in conditions of hunger and diseases caused by malnutri­tion. There is the equivalent of one Hiroshima every two days as a result of world hunger. Come to think of it, that prob­lem is at least as important as nuclear war. I agree with Bob Geldof: "something" must be done now. What we need is a mass movement made up of people who oppose world hunger. We can appeal to the consci­ences of the leaders who hold the purse strings. After all, we elect them. And we must organise collections for the benefit of those who are starving. Just think, if every person in Britain gave a fiver each that would amount to £300 million. That would give £10 to each of the people Oxfam says starve to death each year. But then, what about people living in poverty in Britain? They can't afford to donate £5; according to the Child Poverty Action Group one in four children in this country are living under the official poverty line. We shall need to do something about that. I'll join a campaign to make sure the government doubles family allowances. After all, who can be more im­portant than the children? Well, yes, there are the elderly as well: I shan't forget to do my bit for them. I shall join another cam­paign, such as Help The Aged, which will demand that the government taxes the rich so that pensions are increased. Then there are the disabled. And drug addicts. And vic­tims of domestic violence. I shall need to join a separate campaign to see that each of them gets a fair deal. Then, of course, I shall be joining with my sisters to fight for sexual equality. And I shall also join a separate organisation to demand racial equality. And one more to call for compassion for crimi­nals who ought not to face barbaric penal­ties just because society has turned them to crime. And I really ought to join with the Women Against Rape who want rapists to be castrated. It wasn't until I decided to be­come a reformist that I decided quite how much action I had to do.

Well, I have been working at cutting down the list of organisations to join, so that I don't commit myself to too much. There are the anti-war (sorry, anti-nuclear war) ones: CND, END and the Peace Pledge Union. Then the anti-hunger ones: War On Want, Band Aid, Oxfam. Then the CPAG, Help the Aged, Shelter, London Against Ra­cism, the local feminist collective (they won't let me join, so fortunately I'll have one Tuesday evening free every fourth week) and the campaign for "fair trials" for the min­ers. And I almost forgot Greenpeace. And, of course, Friends of the Earth. And the Troops out movement. Paying the subscriptions will present a few problems. And I'll need a diary with whole pages for each day so that I can remember which problem I'm solving when. I mean, I'd look a bit daft sitting in an anti-nuclear war meeting talking about the need for a march against unemployment, wouldn't I?

Once joined, the action really starts. We shall pass resolutions which will be sent to "progressive" MPs. And we shall organise petitions. It is surprising how willing people are to sign them. True, they are usually filed away in some civil servant's waste paper basket, but at least it's action. Then there are the marches. And it's surprising how many people you meet on one march who you know from the others. Then there's the odd battle for the leadership. Somewhat time-wasting, I admit, but it is all part of prac­tical politics. To be perfectly honest, I have my hopes to become Badge Organiser for Islington Save The Whale. But, of course, I'll have to spend a few nights canvassing sup­port otherwise the post will go to one of those terrible Trots who use reformist or­ganisations by doing all the donkey work.

So, I am in on the action. Unlike those revolutionaries from The Socialist Party, who insist that you cannot eradicate the symptoms without destroying the disease, I am applying many bottles of medicine to the contaminated anatomy of the capitalist system. True, the pills and potions have never been successful in the past. But I have faith. And you need it if you think that refor­mism is the solution to the horror epic of this problem-packed society.

Steve Coleman
Socialist Standard January 1986
Posted by ajohnstone at 3:16 am

I'm all for socialism a la SPGB. I'm also for any part of the surplus value we create coming back to us e.g. free healthcare. I concentrate most of my time and energy on socialism. I leave the reformism to leftist liberals.

I've never really thought of it in that light. While a socialist, I have always been pro reform as well. Many of the social reforms that have occurred here in the USA were the result of protests and other such efforts, but while there are many success stories, they pale in comparison to the number of failed attempts to reform the nation. Though as a side note, every communist revolution I can recall has been a failure in it's goals at best, or a tragic scar on history and the socialist cause as a whole at their worst.