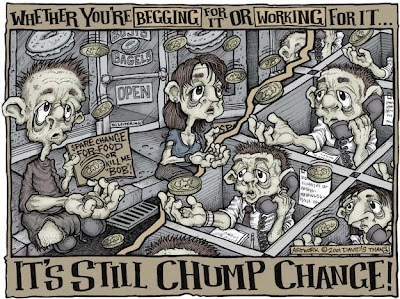 SOYMB's companion blog Socialist Courier recently posted a blog on class called Getting the Blues in Suburbia . It argued that "The fact that many people...live in better houses, do different work or earn more money than some others does not elevate them out of the working class."

SOYMB reads that in America "Suburban poverty rose 25 percent between 2000 and 2008, according to a new Brookings report, as poor suburban populations grew five times faster than their urban counterparts."
Americans may have to get used to the prospect of poor, jobless suburbs that could be just as intractable as the bombed-out inner cities ever were.
There are 1.5 million more poor people living in suburbs than in big cities.The suburban poor are people who have lived there all along and are grappling with job loss, reduced pay and a flailing economy where one unexpected expense can send them into a tailspin.
"This is the new poor who have never had a connection to a safety net before." Scott Allard, a professor at the University of Chicago's school of social service administration said.
Posted by ajohnstone at 9:35 am