Who Owns the Land Under the Sea 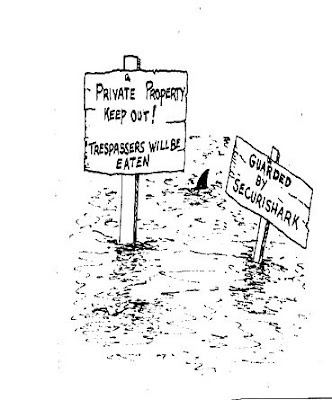 During the recent years there has been much discussion upon the depletion of natural resources . This 1975 article describes the potential of sea mining for manganese nodules which at the time was seen as a possibilty but that has faded in popularity in recent years due to lack of profitability . This wikipedia article offers an up to date account of sea mining for nodules.
In 1994 , the International Seabed Authority was eventually established to organise and control all mineral-related activities in the international seabed area beyond the limits of national jurisdiction .

“Carry on Conferring” may sound like the latest title in a series of third-rate comedy films but in fact this particular farce is anything- but funny, at least not to the participants who have gathered in, Geneva in an attempt to arrive at some common ground - for the establishment of clearly defined and governable laws on the question: who owns the land under the sea? Capitalism being the epitome of a private property system at its most complex, necessitates an equally complex network of laws. Nothing exemplifies this more than the latest follow-on from last year’s session when the legal eagles went Caracas trying to solve their perplexing problem.

The problem is more easily understood when the underlying cause which motivates it is recognized. That cause is profit which in this instance is envisaged from the mining of "nodules" - fist-sized lumps of mineral ore found on the floors of the Pacific and Indian oceans, and the realization of the potential untapped sources of wealth such as manganese, iron, nickel, and cobalt etc, which they contain.

Evan Luard in his book The Control of the Sea-bed tells how in 1959-60, a study by a group of U.S. scientists from the university or California estimated; that the total volume of nodules in the entire Pacific ocean, based on the size of concentrations revealed, by undersea photography, could be around 1,700 billion tons.

These are the figures for the Pacific alone. With the content of the nodules: in the Indian Ocean these figures of course, become even greater. Although the authenticity of these figures has not been verified, the direction in which; they point is obvious. Added to this is the discovery that the nodules are forming all the time, and at a rate in the Pacific alone of-perhaps 10 million tons a year. This then, is the motivation. The problem arises as the conference tries to introduce legislation which will be - acceptable to all the countries represented - a rather fruitless exercise since geographical locations of the individual countries concern and determine the legislation required by them. For example, proposals to widen the outer boundary limits would benefit coastal states (especially the large ones) since the area closest to the -coast will in all probability be richer in resources. If the boundary is extended to 2,500 metres in depth as has been suggested or to the 200 mile limit proposed by Latin America, this would mean the appropriation of the most valuable part of the area by coastal governments.

Conversely, countries with small coastlines, the land- locked and the shelf-rocked, would have to negotiate for a share of these resources. Again, some countries are favoured with wide and narrow shelves while others have none at all. Then there are the emerging capitalist countries such as those in Africa who see the exploitation of the sea-bed as a serious threat to their economies, since some of them depend heavily on the export of mined metal ores, and obviously metal prices could be drastically reduced.

The exploitation of nodules renders obsolete the need for conventional mining and all it entails such as sinking mineshafts and tunnels. where the material is already available on the sea-floor it requires simply to be scooped up . So the talking continues, everyone agreeing that agreement must be reached but all of them unanimous in that they don't know how. Bearing in mind the insular nature of capitalism with each group of representatives striving to secure the most favourable (profitable) conditions for their masters, it is small wonder that no agreement can be reached since one country's gain is another's loss.

Therefore, all the useless platitude being kicked around suggesting that a solution will be found "in the common interest of all concerned" are about as realistic as trying to play musical chairs where no one loses. By "common interest" what is really meant is capitalist interest. No worker has any real interest at stake in this conference, although our masters would like us to believe otherwise, especially if, as is almost certain, the talking stops. Then warning signals might inform us that some nasty foreigner "has" got a tight grip on our nodules (very painful) and that in the interest of “The Nation” etc. etc. The ruling groups of the world however, have no illusions about either the economic basis of this tug-o'-war, or the ultimate outcome in the event of a complete breakdown of discussion. It has been frankly stated that the oceans could become an arena of conflict which would make Vietnam seem like a picnic.

A. MCNEIL
SOCIALIST STANDARD OCTOBER 1975
See also the series of related posts concerning the ownership of the North Pole.
Posted by ajohnstone at 6:34 am

We do well in our education we do how long would it take for a child to understand.