The case against reformism 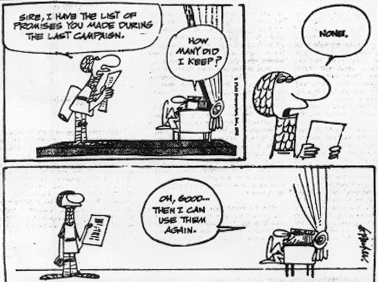 The struggle for even more reforms is irrelevant and only gets in the way.

Back in the 1970s Italy was struck by a plague of snakes. These poisonous vipers were such a menace, particularly to holiday makers, that some resort areas decided to do something about them. At first they of­fered a bounty for every dead snake pro­duced but, inevitably, some smart operators hit on the idea of breeding the snakes and made a substantial profit until the authorities realised they had been outsmarted.
Next, they heard that the number of snakes increased because their natural enemy, the porcupine, was extinct in Italy. Porcupines were acquired from Yugoslavia and let loose in areas infested by snakes. Sadly, word quickly spread among the local hunters that roasted porcupine was deli­cious and soon the fate of that animal in Italy was sealed once again.
Finally, it was decided that the Italian tur­key, with its quickness and sharp beak, would be more than a match for the snakes. Five hundred were ordered but, as their in­tended use was not specified, the shipper assumed they were destined for the dinner table and clipped their beaks to prevent them damaging one another in transit. In the circumstances the dinner table was where they ended up. So far as we know the problem of Italy's surplus snakes re­mains unsolved because somehow or other all the plans made to deal with them always went wrong.

All of this is reminiscent of the efforts made by politicians of left, right and centre to reform away capitalism's plague of prob­lems such as war, poverty, racism, crime and unemployment. They forever plan reforms which they fondly imagine will solve all the problems but, just as with the snakes in Italy, the plans never seem to work out in the intended way.

Experience shows that reforms rarely achieve what their supporters hoped they would. For a start, no matter how closely thought out and worded, every reform con­tains loopholes which will be found by those looking for them. The Equal Pay Act, for example, was supposed to bring women workers the same earnings as men for doing the same job, but many employers found ways of getting around it. They can either slightly lessen the amount of work a woman is to perform or reduce the hours worked by women so that they are clas­sified as part-time workers, a category not covered by the Act. One way and another, the Act has not lessened the gap between what women are paid in relation to men for doing the same work. Indeed the gap has increased. In 1977 women earned on aver­age around three quarters of what men get, but by 1983, the last year for which figures are available, women's comparative earn­ings are down to around two thirds.

The laws passed to outlaw racial dis­crimination in employment don't seem to have had any more success. Despite the existence of the Committee for Racial Equal­ity and the passing of the Race Relations Act there is still widespread discrimination against black job applicants. The Policy Studies Institute reported recently that "...employers continue to hire people on the basis of the colour of their skin" (Guardian, 26 September). The report adds that breaches of the law by employers are usu­ally invisible to black applicants, who are told that the job has gone to someone better qualified.
Nor has the Incitement to Hatred Act re­duced racial violence and abuse. The evi­dence is that not only are these increasing but they are becoming more respectable and have spread from the inner cities to the suburbs. The reason why reforms fail to deal with this problem isn't hard to find. Ra­cial antagonism is the product of capitalism's competitiveness and insecurity and the fears these characteristics arouse. In this case it is the fears of white workers that blacks and Asians will take their jobs and get preference in the allocation of council hous­ing or, if they are suburban owner-oc­cupiers, that the presence of ethnic minorities in their area will reduce property values. These fears go hand in hand with capitalism's tensions and cannot be simply legislated out of existence.

Besides rarely having the desired effect, reforms often have unexpected and un­pleasant side-effects. The policy of rent con­trol adopted by the wartime coalition and postwar Labour and Tory governments was aimed at holding down wage demands in a period of full employment but some of its supporters justified the policy on the grounds that it would protect tenants from greedy landlords. This policy had considera­ble success on the first count and some on the second, but it also greatly reduced the amount of housing available as many land­lords found that the artificially low rents they received didn't make it worthwhile to main­tain their properties, which deteriorated so badly that they often had to be demolished.

So in the long run rent control created a situation where rents just had to rise and the Tory Rent Act of 1957 began the process of de-control. But here, too, an unwanted side ­effect resulted because the act froze tenants' rents for fifteen months unless vacant pos­session was obtained. This provoked some landlords, including the notorious Peter Rachman, to use violence and intimidation against tenants in order to get them out right away.
Recent government legislation designed to move on young unemployed people liv­ing in digs after six weeks is another case in point. Intended to show that the govern­ment was determined to stop alleged abuse of DHSS payments by landladies, the mea­sures didn't take into account that many of these youngsters have lived in institutions for much of their lives and are emotionally or mentally disturbed. For some, their digs are the only real home they have ever known and the thought of having to leave produced a spate of suicide attempts, some successful.

Even when the reformists have achieved their objective, they may well face a struggle to prevent the legislation being reversed. Generations of Labourites put a great deal of time and effort into bringing about the Na­tional Health Service and the nationalised in­dustries, which they imagined would intro­duce a golden age of medical care and full employment. Now they watch in dismay as the NHS is eroded and the nationalised in­dustries are once again privatised.

Were a future Labour government to re­store the NHS to its pre-1979 condition and, however unlikely, re-nationalise whatever industries had been sold off, there would be no certainty that this would last. Govern­ments must always be looking for ways to economise, even in boom conditions, but in the event of a future slump the government, of whatever complexion, will need to cut its expenditure and the NHS and re­nationalised industries could be obvious targets, just as they are now.

This much is certain: no programme of reforms can ever unite the whole working class. The reforms so earnestly sought by left wingers - such as positive discrimina­tion in favour of ethnic minorities in housing and employment, the unification of Ireland, lower council house rents, the abolition of mortgage relief, and so on - will please some workers but enrage just as many more.

The really vital reforms of capitalism were won a long time ago. The vote gave the working class the opportunity to take its fate into its own hands, and wider educa­tional opportunities made it possible for workers to at least consider the socialist case. These gains, together with the fact that society's productive forces have been de­veloped to the point where an abundance of wealth is now possible, make socialism a practical proposition now. The struggle for even more reforms is irrelevant and only gets in the way.

Victor Vanni Socialist
Standard January 1986
Posted by ajohnstone at 3:29 am