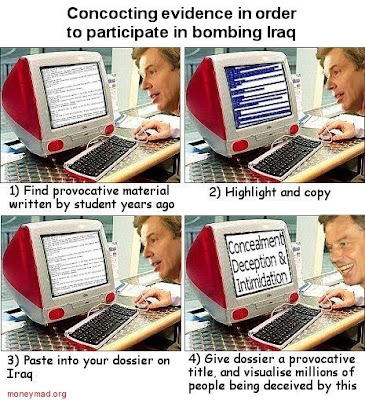 To-day Blair will be sympathetically questioned ( certainly not cross-examined ) about the motives for invading Iraq . If you think anything Blair says is trustworthy, consider the following:

1) "The assessed intelligence has established beyond doubt … that Saddam has continued to produce chemical and biological weapons" (Tony Blair’s foreword to the dossier on Iraq, 24 September 2002)

Fact: After over three months of inspections, the UN weapons inspectors reported on 6 March that "No proscribed activities, or the result of such activities from the period of 1998-2002 have, so far, been detected through inspections”.

2) "There is no doubt about the chemical programme, the biological programme, indeed the nuclear weapons programme. All that is well documented by the United Nations." (Tony Blair, 30 May 2003)

Fact: The UN had found no evidence of any on-going programmes since the mid-1990s. Dr Hans Blix said on 23 May that "I am obviously very interested in the question of whether or not there were weapons of mass destruction and I am beginning to suspect there possibly were not."

3) "The reason why the inspectors couldn't do their job in the end was that Saddam wouldn't co-operate." (Tony Blair, interview on 4 April 2003)

Fact: Hans Blix told the Security Council on 7 March 2003 that "the numerous initiatives, which are now taken by the Iraqi side with a view to resolving some long-standing open disarmament issues, can be seen as 'active', or even 'proactive'".

4) "the UN has tried unsuccessfully for 12 years to get Saddam to disarm peacefully." (Tony Blair, interview in the Independent on Sunday, 2 March 2003)

Fact: In 1999, the Security Council set up a panel to assess the UN's achievements in the peaceful disarmament of Iraq. It concluded that: "Although important elements still have to be resolved, the bulk of Iraq's proscribed weapons programmes has been eliminated."

5) "We have already found two trailers, both of which we believe were used for the production of biological weapons" (Tony Blair, press conference in Poland on 30 May 2003)

Fact: Government experts believed that the trailers were used for the production of hydrogen for artillery guidance balloons - a system, incidentally, sold by the UK to Iraq in the 1980s.

6) “There is some intelligence evidence about linkages between members of al-Qaeda and people in Iraq." (Tony Blair to the House of Commons Liaison Committee, 21 January 2003)

Fact: In early February, a classified British intelligence report, written by defence intelligence staff in mid-January and presented to Tony Blair just prior to his 21 January presentation at the Liaison Committee, stated that there were no current links between the two, and that Bin Laden's "aims are in ideological conflict with present day Iraq".

Fact: Resolution 1441 was secured on the British assurance that it did not authorise military action, even if the UK or US believed it was being violated by Iraq. Britain's UN ambassador Jeremy Greenstock informed the Security Council on 8 November 2002 that "There is no 'automaticity' in this Resolution. If there is a further Iraqi breach of its disarmament obligations, the matter will return to the Council for discussion".

8) "On Monday night, France said it would veto a second Resolution whatever the circumstances." (Tony Blair to the House of Commons, 18 March 2003)

Fact: President Chirac said that France would vote against any resolution that authorised force whilst inspections were still working. Chirac said that he "considers this evening that there are no grounds for waging war in order to ... disarm Iraq."

9) "The oil revenues, which people falsely claim that we want to seize, should be put in a trust fund for the Iraqi people administered through the UN." (Tony Blair to the House of Commons, 18 March 2003)

Fact: Britain co-sponsored a resolution to the Security Council, which was passed in May as Resolution 1483, that gave the US and UK control over Iraq's oil revenues.

10) "Our aim has not been regime change; our aim has been the elimination of weapons of mass destruction" (Tony Blair, press conference, 25 March 2003 )

Fact: UN weapons inspectors were reporting Iraq's "proactive" cooperation, and were offering that Iraq could be confirmed as fully disarmed within three months if that assistance continued. If Mr Blair's aim was the elimination of prohibited weapons, why terminate the inspection process just when it was most effective?

SOYMB will simply echo Alan Greenspan ,18 years as chairman of the Federal Reserve Bank , the nation's central bank, in his new book, "The Age of Turbulence: Adventures in a New World,"
"Whatever their publicized angst over Saddam Hussein's 'weapons of mass destruction' , American and British authorities were also concerned about violence in an area that harbors a resource indispensable for the functioning of the world economy," Greenspan wrote. "I'm saddened that it is politically inconvenient to acknowledge what everyone knows: The Iraq war is largely about oil"
Posted by ajohnstone at 8:35 am