Thatcherism with a Blair Face 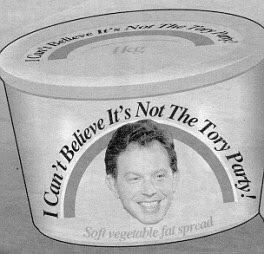 The proportion of people who believe the government should redistribute from the better-off to the less well-off has fallen significantly over the past 13 years. Research shows that half the population supported such a move in the mid-1990s, but that has fallen to less than a third. In 1997, 46% of the population believed that unemployment benefits were too low, but that has now fallen to below 30%.The findings suggest people have become less concerned with inequality since Labour came to power.

The traditional response of Labour governments to the problems thrown up by the market economy is to move further to the right, so seasoned opinion would have it. And there would appear to be some justification for this view: from Ramsay MacDonald's formation of a National Government to supersede the Labour administration in 1931, to the eventual centrist drift of the reforming Attlee government after the war, through to the Wilson and Callaghan administrations which were characterised by radical rhetoric but anti-working class intent.By the time of the 1997 election, Labour's programme was so right wing it was barely distinguishable from that of the Tories – especially so on economic affairs, social issues and foreign policy. The Blair administration had the dubious distinction of being the most right wing Labour government ever. Any party that tries to run capitalism gets its hands grubby, as a matter of course, in what is a very dirty business.It is little wonder if the voting working class have difficulty in separating Labour from the Tories.

The false choice of Tories or Labour is a way to try to fool voters into trooping into the ballot booths to give assent to spinach over cabbage. When there is little discernible difference over policy, then the politicians have to appeal to feeling, and attitude: we cut welfare out of "tough love", they cut welfare to be "mean and spiteful". It's like the differences in branding between Coke and Pepsi.

Perhaps , the true legacy of Blair is the mounting apathy to politics. Voters are not turning out because they think it's pointless. The voters feel that their influence is slight. Traditionally this was overcome by political parties being closely attached to identifiable social groups, with the members of these groups being able to feel a part of the ongoing political process. The party represented, in one way or another, the aspirations of that group; thus they would turn out to vote with a strong feeling of involvement. Once the political structure is unable, as now, to accommodate any semblance of reforms so as to be able to give any vent to the aspirations of more dispossessed sections of society, then politicians can no longer rely on that sort of support. They have to resort to trying to scare the electorate into supporting them, into fooling them into voting for them. They know that to keep the system functioning, they have to persuade people to turn up, and give their support for it. That is the politicians' job; since they cannot actually make or change events, they have to work hard to pretend that they can. Their function is to win and maintain public confidence. At the end of the day they are merely actors, and our modern media-driven politics could be easily called a thespocracy, rule by actors.

Posted by ajohnstone at 9:49 am