The Fetishism of Money 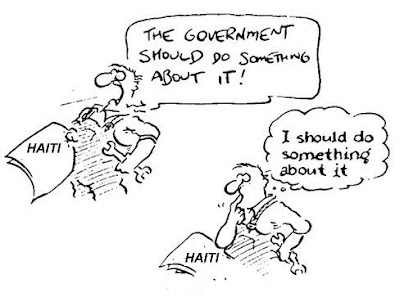 The Lancet said the situation in Haiti remained “chaotic, devastating and anything but co-ordinated”. It accused agencies of “jostling for position” and needless competition for funds.

“Polluted by the internal power politics and the unsavoury characteristics seen in many big corporations, large aid agencies can be obsessed with raising money through their own appeal efforts,” The Lancet wrote.

How often do we hear it said, “we do not have the resources” ? What is meant by resources is always money. Reliance on the imagined powers of money runs through every social problem , even disasters such as the Haiti earthquake. The magical powers of money to solve problems dominates the many charities that constantly ask for money. It is not the purpose here to criticise those who want to do something to help others in desperate need. In a way, their willingness to help provides a hope for the future. But the brutal facts have to be faced that the present appeals for money are a pathetic substitute for the availability of real resources and the freedom that communities in socialism would have to immediately use them.

Many are unable to see the availability of real resources because their minds are pre-occupied by the illusion that only money resources count. The fetishism of money has distorted their thinking. They imagine that real resources can only be brought into use by money, whereas the opposite is the truth. Problems are not solved with money resources. They are solved by people using their labour, skills and the necessary materials and there is in fact an abundance of these material resources.The powers of the world community to go to the aid of the victims and survivors of traumatic events such as in Haiti can on be fully released with socialism and the abolition of money.
Posted by ajohnstone at 7:30 am