What the conspiracy theories aren't telling you 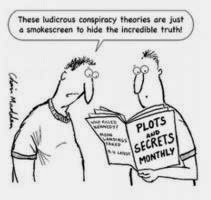 What the conspiracy theories aren't telling you
A talk by guest speaker, Edmund Griffiths, of the Oxford Communist Corresponding Society and author of 'Towards a Science of Belief Systems'

From the 9/11 attacks to the moon landings, from Roswell to the Illuminati, and from the Bilderberg Group to the Kennedy assassination, people seem increasingly prepared to believe in a world of conspiracies—a world ruled in secret by global shadow governments, a world where the truth is veiled by official cover stories that grow ever more devious and opaque. What makes these beliefs so attractive? And how do they relate to the capitalist society within which they have emerged?

Posted by ajohnstone at 5:34 am