The End of Capitalism or the End of the World? 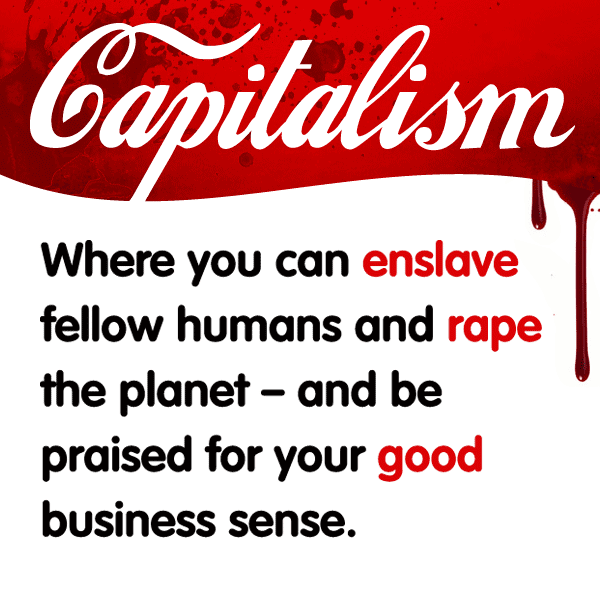 World leaders decided that global warming should be limited to 2 degrees Celsius. Achieving that target, though, would take nothing less than a miracle. It is becoming increasingly clear that mankind has failed to address its most daunting problem. Since 1880, when global temperatures began to be systematically collected, no year has been warmer than 2014. The 15 warmest years, with one single exception, have come during the first 15 years of the new millennium. Indeed, it has become an open question as to whether global warming can be stopped anymore -- or at least limited as policymakers have called for. Should greenhouse gas emissions continue as they are today, the world will likely reach the 2 degree Celsius maximum within 30 years. Indeed, in order to have any chance at all of stopping global warming at 2 degrees Celsius, emissions would have to fall by 10 percent per year starting in 2017 at the latest, says Fatih Birol, head of the International Energy Agency.

Take Australian Prime Minister Tony Abbott. He’s extremely proud of his country's wonder of the world, the Great Barrier Reef. At the same time, though, Abbott believes that burning coal is "good for humanity," even though it produces greenhouse gases that ultimately make our world's oceans warmer, stormier and more acidic. In recent years, Australia has exported more coal than any other country in the world. And the reef, the largest living organism on the planet, is dying. Half of the corals that make up the reef are, in fact, already dead.


Indian Prime Minister Narendra Modi also wants the best for his country and is loathe to see it damaged by droughts, cyclones and storm surges. Nevertheless, he is planning on doubling India's coal production by 2019 in addition to importing more coal from Australia. It is necessary to do so, he says, to help his country's poor. India is already the third largest producer of greenhouse gases, behind China and the United States. But climate change is altering the monsoon season, with both flooding and drought becoming more common.

The US under Obama has become one of the world's largest producers of oil and natural gas. When he steps down in 2016, his country will likely produce more fossil fuels than even Saudi Arabia. And that's a development Obama is indeed proud of. During a campaign appearance in Oklahoma in 2012, he said: "We've added enough new oil and gas pipelines to encircle the Earth and then some."

And who would accuse the majority of US Senators of being insensitive to the extreme shortage of water afflicting California? Yet the law-making body recently brushed aside everything science has learned about global warming and voted down two measures that attributed the phenomenon to human activity. For Americans and foreign tourists alike, California is a magical place, famous for Yosemite National Park, its Pacific coastline, its golden light. The state also grows around a third of all US produce. For now. An historic drought that has been ongoing for over three years has forced farmers to abandon their fields and to slaughter their animals. Yet  Jim Inhofe, the new Republican chairman of the Environment and Public Works Committee, has said. "God is still up there. The arrogance of people to think that we human beings would be able to change what He is doing in the climate is to me outrageous." Louisiana governor, Bobby Jindal, said last September that climate change is nothing more than a "Trojan horse" for the left.

The sheer scope of the destructive effect the production of fossil fuels already has today is visible when you visit places that provide the world with its supplies of coal, oil and natural gas. Louisiana, for example, an oil-rich US state whose coast is sinking into the sea and which is threatened by hurricanes. On the coast of Louisiana, a piece of land the size of a soccer field disappears into the sea every hour. The Pointe-au-Chien Indian tribe has lived on Louisiana's coast for generations, 50 miles southwest of New Orleans. The tribe today counts some 45 families, and they have had to move several times in recent years. Following Hurricane Lili in 2002, they built wooden houses on high stilts to avoid the storm surges.

A three-star general, Russell Honoré, led the army's relief mission following Hurricane Katrina. Since then, Honoré -- is considered a hero around these parts. "You know who gets rich in Louisiana?" he asks with a dismissive laugh. "Oil and gas companies. And the lawyers who sue oil and gas companies." In 2013, he formed an alliance of environmental groups, dubbed it the Green Army, and began recruiting supporters. People took notice, in part because of Honoré's military past. "I spent 37 years, three months and three days in the army," Honoré says. "I didn't come back to my home state to see it run by oil and gas companies." The companies, he says, pollute the air and water and destroy the land while politicians who depend on their donations allow them to do as they please. "The governor is a smart guy," Honoré says. "But he sold his brain to the oil and gas industry. He goes with the dollar."

In frequent public appearances, Honoré encourages people to protest against the destruction of their environment. He also threw his support behind a lawsuit filed against 97 oil, gas and pipeline companies that, should it be successful, will overshadow even the multi-billion dollar proceedings against BP following the Deepwater Horizon catastrophe. The Southeast Louisiana Flood Protection Authority-East (SLFPA-E), a local flood protection authority that was founded in the aftermath of Hurricane Katrina came to the conclusion that oil and gas exploitation in the region is the primary cause of the coastlands sinking into the sea and that the companies involved should pay to protect the coast to the degree possible. The plan to provide that protection is called the Coastal Master Plan, but between $50 billion and $100 billion dollars are necessary to implement it, depending on which calculation you go by.

In the Chinese coal province Hebei, whose 70 million inhabitants would be better advised not to leave their homes on many days of the year because levels of fine particulate matter go far beyond those considered to be safe. The scale of China's coal consumption is historic in its dimensions: The country is the world's largest producer and consumer of coal and it emits more greenhouse gases than the United States and Europe combined. The cities of Beijing and Tianjin as well as the Hebei and Shandong provinces alone burn more coal than all of Europe. Hebei is to China what China is to the world: a coal-consuming monster. The province surrounding Beijing has more than 70 million inhabitants and is half as big as Germany. It produces more than double the amount of steel created in the US each year. Seven of China's 10 most-polluted cities are located in Hebei. Among the most polluted is Xingtai, a city two hours away by high-speed train from Beijing. In 2013, Xingtai had a daily average level of 150 micrograms per cubic meter of fine particulate matter, six times the maximum amount suggested by the World Health Organization. Visitors arriving at the city's train station are greeted by an acrid burning smell and the other side of the station is blurred by a gray haze. One of the biggest polluters is Kingboard Cokechem, a coking plant in the northeastern part of the city. It's a subsidiary of Hong Kong-based, publicly traded Kingboard Chemical Holding, whose shareholders also include major international investors like JPMorgan Chase & Co. A study by the Global Commission on the Economy and the Climate concluded that air pollution was linked in 2010 to the premature deaths of 1.23 million people in China.

On the Arabian Peninsula, which is almost entirely covered in desert, ground water levels are falling dangerously. In Africa and Central Asia, deserts are expanding. In Israel, Australia and Brazil, lakes and rivers are drying up. Soon, climate change could result in shortages of such goods as coffee, chocolate and wine from southern France.

Politicians around the world have repeated the number like a mantra: Average global temperatures should not be allowed to increase by more than 2 degrees Celsius (3.6 degrees Fahrenheit) relative to pre-industrial times. A "dangerous anthropogenic interference with the climate system" is to be prevented, reads the United Nations Framework Convention on Climate Change. In 2014, around 60 percent more greenhouse gases were pumped into the atmosphere than in 1990, the year against which most reduction targets are measured. There is little to indicate that the trend might soon change. And if it doesn't, if emissions continue at today's rate, the World Bank calculates that average global temperatures will increase by 4 degrees Celsius by the end of the century. The consequences of so much warming, the World Bank says, would be "extreme heat-waves, declining global food stocks, loss of ecosystems and biodiversity, and life-threatening sea level rise."

The choice of 2 degrees Celsius as the maximum limit was largely an arbitrary one. Indeed, the 44 members of the Alliance of Small Island States (AOSIS) believe that, in a world that is 2 degrees warmer, many of their islands would disappear. They are demanding that the upper target limit be reduced to 1.5 degrees Celsius. But as things currently look, the 2-degree target is hopelessly utopian. It is supposed to sound reassuring, but it is little more than hot air. Since 1880, average global temperatures have already increased by 0.8 degrees Celsius, and the consequences have become widely evident.

Destroying the environment is by no means a law of nature. Rather it is a law of economics…

SPIEGEL: You don't appear to be counting on the collective reason of politicians and entrepreneurs.

Naomi Klein: Because the system can't think. The system rewards short-term gain, meaning quick profits. Take Michael Bloomberg, for example ...who understood the depths of the climate crisis as a politician. As a businessman, however, he chooses to invest in a fund that specializes in oil and gas assets. If a person like Bloomberg cannot resist the temptation, then you can assume that the system's self-preservation capacity isn't that great.

SPIEGEL: A particularly unsettling chapter in your book is about Richard Branson, CEO of the Virgin Group…Branson has sought to portray himself as a man who wants to save the climate. It all started after an encounter with Al Gore.

Klein: And in 2006, he pledged at an event hosted by the Clinton Global Initiative that he would invest $3 billion in research into green technologies. At the time, I thought it was truly a sensational contribution. I didn't think, oh, you cynical bastard.

SPIEGEL: But Branson was really just staging it and only a fraction of that money was ever spent.

Klein: He may well have been sincere at the time, but yes, only a fraction was spent.

SPIEGEL: Since 2006, Branson has added 160 new airplanes to his numerous airlines and increased his emissions by 40 percent. What is there to learn from this story?

Klein: That we need to question the symbolism and gestures made by Hollywood stars and the super rich. We cannot confuse them with a scientifically sound plan to reduce emissions.

Posted by ajohnstone at 1:16 am