Change the system not the climate 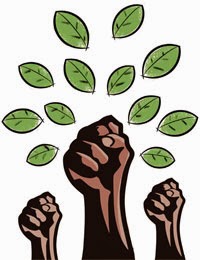 The dream of a just and classless society has long stirred the hopes of women and men, shackled by exploitation, poverty, oppression, and war. The early 19th century labor movement envisioned a cooperative community of producers and many constructed intricate blueprints for egalitarian societies. So we can’t claim that Marx and Engels invented the idea of a society defined by common ownership, mutuality, freedom and equality although they said much about socialism. Climate change in particular has radicalising potential, as more and more people are beginning to question the prevailing economic system’s detrimental effect on the environment. But mainstream environmental groups aren’t offering a coherent critique of capitalism’s ecological consequences or doing the work of presenting alternatives.

The global economy, despite all of the bumps in the road, is delivering aggregate annual growth of 3-4%, leading to a doubling of output every generation. Yet the global economy is not delivering sustainable growth in two basic senses. In many parts of the world, growth has been deeply skewed in favor of the rich; and it has been environmentally destructive – indeed, life-threatening. Climate change is the greatest of these environmental threats. Given the current trajectory of global fossil-fuel use, the planet’s temperature is likely to rise by 4-6 degrees Celsius above its pre-industrial level, an increase that would be catastrophic for food production, human health, and biodiversity; indeed, in many parts of the world, it would threaten communities’ survival. Governments have already agreed to keep warming below 2º Celsius but have yet to take decisive action toward creating a low-carbon energy system.

Capitalism has inflicted incalculable harm on the inhabitants of the earth. Tragically, the future could be even worse for a simple reason: capitalism’s destructive power, driven by its inner logic to expand, is doing irreversible damage to life in all its forms all around the planet. Rosa Luxemburg famously said that humanity had a choice, “socialism or barbarism.” In these days of climate change, her warning has even more meaning. Almost daily we hear of species extinction, global warming, resource depletion, deforestation, desertification, and on and on to the point where we are nearly accustomed to this gathering catastrophe. Our planet cannot indefinitely absorb the impact of profit-driven, growth-without-limits capitalism. Unless we radically change our methods of production and pattern of consumption, we will reach the point where the harmful effects to the environment will become irreversible. Even the most modest measures of environmental reform are resisted by sections of the capitalist class. This makes the establishment of a socialist society all the more imperative.

At one time the environmentalist was all about conserving a unique spot of nature or protecting  this or that rare animal. Now, they are activists against the extractive industries, campaigners against the consumer culture and increasingly protesters against the profit system. They are fighting for the planet. People may not care much about a few islands disappearing. But untold millions of people will face the need to escape cities worldwide that will not be able to cope with and survive many feet of higher oceans flooding their infrastructure, streets and housing. Where will those millions of people go? How will such deep economic disaster be managed by governments? Scientists are unanimous in warning us that unless we very rapidly reduce CO2 emissions, we risk passing a tipping point beyond which we will be powerless to prevent uncontrollable global warming. We risk a human-produced extinction event. Before irreversible climatic feed-back loops take over, making human action useless, we must replace fossil fuels completely by renewable energy. This is by no means a hopeless task. The technology needed is already in place. The main obstacle to be overcome are the fossil fuel industries. They will use any method, fair or foul, to cash in on the vast deposits of fossil fuels which they own.

“If you want parents to make the choice to reduce their number of offspring, there’s no better way than making sure those offspring survive,” said Joel Cohen, author of the magisterial book How Many People Can the Earth Support? “There’s no example of decline in fertility that has not been preceded by a decline in child mortality that I know of.” There is abundant evidence of this pattern all over the world, regardless of religion. Where children die and women are repressed, population booms. Where children thrive, and women are empowered, population growth stops.

Sustainable agriculture expert Gordon Conway writes in his book, One Billion Hungry: Can We Feed the World?:
“A popular misconception is that providing the developing countries with more food will serve to increase populations; in other words, it is a self-defeating policy. The more food women have, the more children they will have and the greater will be their children’s survival, leading to population growth, so goes the argument. However, the experience of the demographic transition described above suggests the opposite. As people become more prosperous, which includes being better fed and having lower child mortality, the fewer children women want. Providing they then have access to family planning methods, the fertility rates will drop and the population will cease to grow.”

The key factor connecting child mortality and lack of women’s rights is poverty. Therefore, environmentists have to do is, first and foremost, campaign for social justice. If ending all poverty were as simple as producing enough food to feed everyone, our work would be done. Farms already grow enough food for every person on the planet — 2,800 calories a day, if it were divvied up equally. But we have never shared resources equally.

Clearly there’s tremendous room for improvement, and increasing yields. In Sub-Saharan Africa, farmers get a little over a ton of grain per hectare in an average year — about what farmers in Europe were getting during the Roman Empire. During the Green Revolution, the push to increase yields was focused on large farmers, and sometimes smaller farmers did not benefit. There’s a huge amount of conflicting literature on this point. As Conway writes, “A review of over three hundred studies found that for 80 percent of the studies inequality had worsened.” In addition, the heavy use of pesticides and fertilizer during the Green Revolution caused all sorts of environmental problems.
The current jargon is “sustainable intensification,” which — as happens with jargon — is taken to mean everything and nothing. Sustainable intensification includes a panoply of agroecological techniques. Farmers are planting nitrogen-fixing trees, which shelter crops, prevent erosion, and provide fertilizer. There’s the push-pull strategy, where farmer push bugs away from grain by growing insect-repellent plants along the rows, while also pulling pests away from the crops by planting an attractive plants outside the fields. Aquaculture is on the rise, creating an opportunity for more fish polyculture. Farm technology isn’t a war between good and evil — it’s a quest for whatever works. Small farmers have proven that they can use tools of industrial ag in a non-industrial way. They use high-tech hybrid seeds to get record-breaking yields with an alternative cropping technique. In Niger, farmers developed a method of using Big Ag fertilizer on a tiny scale: by filling a soda-cap with a mix of phosphorus and nitrogen, and dumping this micro-dose in with each seed.

Many people worry that giving poor farmers industrial technology will lock them into an industrial path. There’s no doubt that is true, as far as it goes. If it’s easy to get nitrogen, you may not want to do all the work, and develop the skills needed, to nurture nitrogen-fixing trees to maturity. GMOs, because they are politicized, are especially controversial. Genetic engineering is not a silver bullet. At the same time, the goal of helping small farmers improve their lives gets a lot harder if they are held to an impossibly high standard, and we keep rejecting the tools that they’d like to use. Small farmers are already taking a middle path — it’s not as if use of some modern technology will forever corrupt them. In Ghana, farmers trained by 4-H in agroecological techniques abandon them when they actually have to manage their own land and make a living. And an organic farmer training people in Malawi has found that teaching small farmers how to use a little bit of synthetic fertilizer and herbicide is much more likely to work than the all-natural alternatives. As the U.N.’s former special rapporteur on the right to food, Olivier De Schutter, put it, “While investment in organic fertilizing techniques should be a priority, this should not exclude the use of other fertilizers.”

One way or another, the coming decades will be decisive for the fate of human civilisation. Unless greenhouse emissions are swiftly and drastically curbed the result will be environmental catastrophe on an almost unimaginable scale, threatening the survival of all life on the planet. The reality of climate change is already manifesting itself in an increasing number of extreme weather events, such as heat-waves, droughts, floods and typhoons. Melting ice sheets are resulting in rising sea levels and increased flooding of low-lying areas. Some islands will soon be totally submerged, turning their inhabitants into climate refugees. Some solutions to climate change are known and simple: rapidly phase out the use of fossil fuels, make the switch to renewables and halt deforestation. But significant economic interests at the heart of the capitalist system have big investments in coal, oil and gas. Protecting these interests, governments refuse to take more than token measures to halt climate change. The goal of the big corporations is to secure the greatest possible profits for their super-rich owners — regardless of the consequences to the planet and its people.

Imagine an alternative, a society where each individual has the means to live a life of dignity and fulfilment, without exception; where discrimination and prejudice are wiped out; where all members of society are guaranteed a decent life, the means to contribute to society; and where the environment is protected and rehabilitated. This is socialism — a truly humane, a truly ecological society. With socialism our work would engage our skills and bring personal satisfaction. Leisure time would be expanded and fulfilling. Our skies, oceans, lakes, rivers and streams will be pollution free. Our neighborhoods would become green spaces for rest and recreation. Communal institutions, like cafeterias will serve up healthy and delicious food and offer a menu of cultural events.
Posted by ajohnstone at 3:46 am