Living Close To The Minimum Wage In US

Top 4 largest occupation sectors in the United States all in the low wage service sector paying $10 an hour or less: What does it mean living near the minimum wage?

People have a hard time wrapping their minds around the economic fact that the top employment sectors in the United States are all made up of occupations in the low wage service sector.  We define low wage as a job that pays $10 an hour or less.  The press doesn’t really highlight this working poor segment of our society even though a large percentage of our population is employed in an industry that pays very little and offers scant benefits (if any).
There was a time when the top employment sectors in the US involved people making things and wages provided enough for a healthy standard of living.  Now most Americans need to go into incredible levels of debt to purchase homes or even go to college.  I always find it useful to look at the top employment sectors in our country because it gives us a good sense as to what jobs are dominating the market.  Let us take a look at some of the top employment fields.

It may be a surprise to you that the job with the most workers is that of retail salesperson.  Over 4.4 million Americans are employed in this job category.  This job pays very little but also carries almost no benefits.  Then we wonder why many of the 46 million Americans on food stamps actually have jobs.
But let us look at the top fields more carefully:

The top 4 employment sectors are:

Over 13 million Americans are employed in these four industries alone that pay very low wages.  These are the top jobs in our country.  The next top field is nursing which does pay a good wage but requires people to go to college.  Many public schools that offer nursing programs are heavily impacted many with waiting lists that go on for years.  Private schools are there of course, but tuition is soaring beyond wage growth so many are forced with choosing between a life of minimum wage or going into debt to finance their education.
Following nursing, the next top employment sector is waiters and waitresses.  This is another sector that pays little and offers virtually no benefits.  Next?  Customer service reps.  In fact, out of the top 10 employment sectors in the US only one pays what many would consider a livable wage.

We covered income data in a previous post and some had a hard time understanding why the tax bracket with the largest raw number of people are those making $15,000 or less: 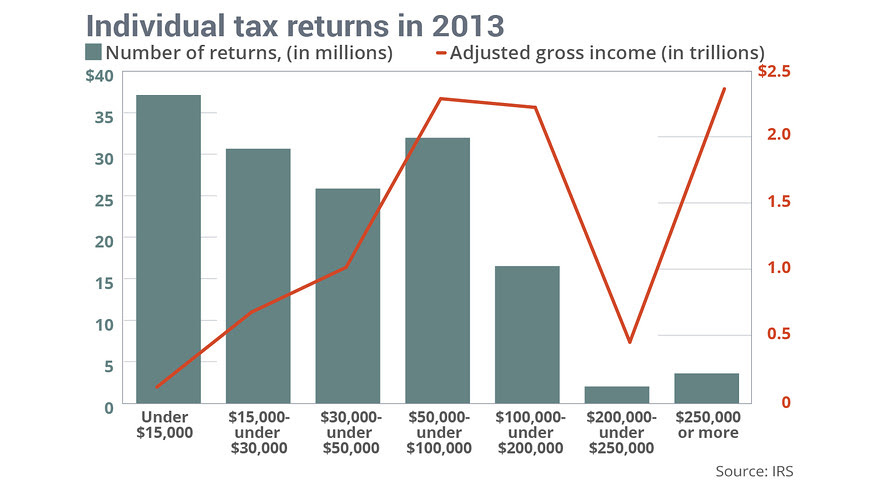 There is a reason why there are tens of thousands of dollar stores selling items that are largely made outside of the US.  Many older Americans, a growing segment of our society, are living day-to-day only because of Social Security.  In fact, without Social Security many would be out in the streets living a life of financial destitution.
I’m not sure if we are going to see this trend reverse anytime soon.  Certainly the political theme for 2016 is going to be economic.  The focus will be on wages and the middle class.  But as you can see from the data above, a large portion of our society has been demoted from the middle class into a large low wage economy where debt is a necessity to move forward.