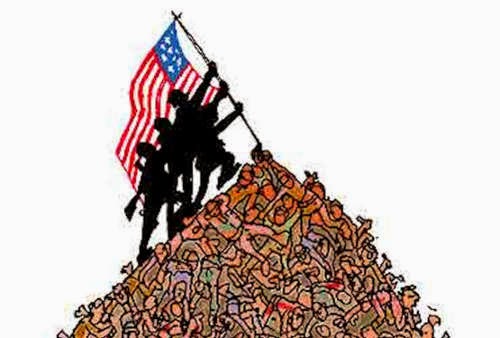 Did you know that 85 to 90 percent of war’s casualties are non-combatant civilians? That is the conclusion reached by a nine-person research team in the June 2014 issue of the American Journal of Public Health.

The deaths of soldiers who are fighting the war are a small part of the human and economic cost. Clearly, wars do not protect the lives of civilians. The notion that soldiers are dying for us is false. Non-combatants are the main victims of war.

According to the article in the American Journal of Public Health, during the 20th century 190 million deaths could be directly and indirectly related to war.

America’s wars have always been fought elsewhere–Cuba, Haiti, Mexico, Philippines, Japan, Germany, Korea, Vietnam, Panama, Afghanistan, Iraq, Libya, Syria, and Somalia. Washington even attacks countries with which the US is not at war, such as Pakistan and Yemen, and engages in proxy wars.

The article cited above reports: “The United States launched 201 overseas military operations between the end of World War II and 2001, and since then, others, including Afghanistan and Iraq.”


Not a single one of these wars and military operations had anything whatsoever to do with defending the US population from foreign threats. Not even Japan and Germany posed a threat to the US. Neither country had any prospect of invading the US and neither country had any such war plans. Is there anyone so foolish as to think that Grenada or the Sandinistas were a threat to the United States, that North Korea or North Vietnam comprised threats to the United States? Yet, the Korean and Vietnam wars were treated as if the fate of the United States hung in the balance.

Washington orchestrated a coup that overthrew the elected government of Ukraine and installed a stooge government. Washington’s stooges began issuing threats against Russia and the Russian speaking population in Ukraine. These threats resulted in those parts of Ukraine that were formerly part of Russia declaring their independence. Washington blames Russia, not itself, and is stirring the pot, demonizing Russia and recreating the Cold War with military deployments in the Baltics and Eastern Europe. Washington needs to reinvent the Cold War in order to justify the hundreds of billions of dollars that Washington annually feeds the military/security complex, some of which recycles in political campaign donations.

Americans’ worst enemies are not al Qaeda, Iran, Russia, and China. America’s worst enemies are our own presidents who have declared repeatedly that the orchestrated “war on terror” gives them the right to set aside the civil liberties guaranteed to every citizen by the US Constitution. Having stripped US citizens of their civil liberties, executive branch agencies are now stocking up vast amounts of ammunition, and the Department of Agriculture has placed an order for submachine guns. The Department for Homeland Security has acquired 2,717 mine-resistant armored personnel carriers.

17,300 nuclear weapons are presently deployed in at least 9 countries, many of which can be launched and reach their targets within 45 minutes. It only takes one fool–and Washington has thousands of fools–and all life on earth terminates in 45 minutes.

Taken from the Countercurrents website
Posted by ajohnstone at 1:22 am