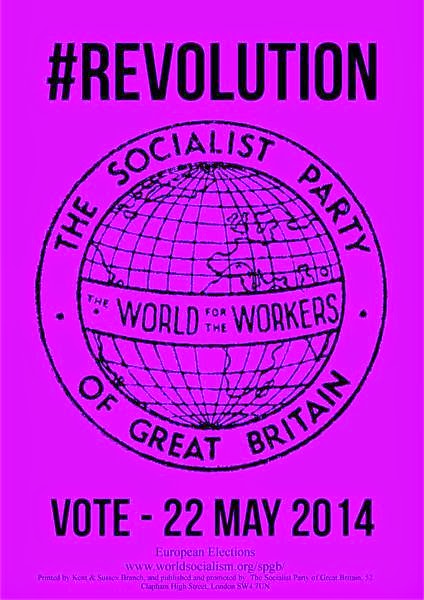 The political system is a pretty good system for some: a small group of immensely wealthy convince the vast majority of the population that they have the right to decide how the world will be run and the only right the majority possess is to continue to be exploited. The truth is that the capitalist politicians, who represent the system which produces unemployment, wars and misery are cynically unconcerned about the sufferings of the workers except insofar as it gives them arguments against those in office and for those who want to get their snouts into the trough. For many years the working people of this country have divided their strength between the Conservative and Labour parties. Through their votes they have placed first one and then the other of these parties into power. The result has always been the same for the workers. Whether one or the other of the old parties have been in office the machinery of the government has been used against the workers and to help the industrial barons and financial magnates.

We live in a “democracy” because we get to choose whether the Tories or Labour are going to run the government; but what this really boils down to is that we get to choose which section of the ruling class is going to run the government and exploit the working people. The Labour Party is more “progressive” – they believe in throwing the working class a few crumbs every now and then to keep them quiet; the Tories are, well what their official name says -  conservative – they’d rather use the stick than the carrot. But both parties represent the interests of the rich and the privileged who own and control most of the wealth the working people produce in their factories,  – and they own and control the Tories and Labour Parties, too.

Both have a number of characteristics in common: they are made up of professional “politicians”, they’re structured entirely around winning elections(or in other words, doing a better job at fooling the people than the other party) and the majority of people (and their members) have no say whatsoever in the policies of either party. These are formulated usually by think-tanks financed directly by the capitalists themselves.

People are given a choice. If you don’t like the Labour Party, vote Conservative; and vice versa. However, if you don’t like the ruling class then simply shut the f**k up and accept the choices you are given. Are the workers of the country to continue to use their political power to support the capitalist exploiters? Are the workers going to permit the use of the government against them to go on unchecked?

The Socialist Party thinks differently: we believe the working class can and must have its own political party, a party that will serve its own interests, not those of the exploiting class. Basing ourselves on the Marxist theory of society, we in the Socialist Party understand that politics is essentially a war between the two main classes in modern capitalist society: those that work (the working class or proletariat) and those that exploit those who work (the capitalist class or bourgeoisie). Just as the pro-capitalist parties strive to defend and maintain capitalism, the Socialist Party strives for socialism and the rule of the vast majority of people and not by a tiny handful.

Capitalism is an economic system which is based on the exploitation of working people by a handful of the extremely wealthy. The exploitation of the workers by capitalism causes their oppression. As long as this basic system continues to exist, so will the misery of the working class. Recognising this, the socialist movement seeks to organise the entire working class into a powerful movement to overthrow the power of the capitalist class.

The factories, the transport systems and  the farms that the working class has built will be taken away from the owning an employing class. The fruits of our labour, the immense social wealth we create each and every day, will be shared equally through a planned economy based on the needs of people rather than profit. And for the first time in the history of civilisation, we will have a society where the majority of ordinary people govern ourselves rather than serve a small ruling class sitting pretty on top of the rest of society; in other words, we will have a society where democracy is a reality for the many and not a privilege of the few.

The working class fights back against its exploitation and oppression under capitalism, whether it has a political party of its own or not, (proved by the great number of often very militant strikes, protest demonstrations and marches, and so on occurring right now, even though there is no mass working class party in existence) However, it cannot win in the long run without its own political party. At best, all these struggles we are forced to wage each and every day just to survive can only lead to trying to cure the cancer of capitalism with a band-aid. This is because these everyday struggles only attack part of the problem (a particular business, a particular local authority etc.), not the problem itself – which is the capitalist system. Also because they only attack with a small part of the working class’ forces: the everyday struggles are like an “open hand,”more a slap in the face of capitalism than a damaging blow form our “clenched fist” – and so it is not too difficult for the bosses and their political henchmen to “break our fingers” one by one.

There are a number of features of the Socialist Party that sets it apart from the usual parties.  Our party cannot operate as a vanguard and it has no room for careerists who want to latch onto it to serve their own selfish ends. The Socialist Party membership is united in terms of its general political outlook, and speaks with a single voice. If it speaks with many voices, it cannot focus in a single direction and will dissipate its forces. Disagreements still occur, nevertheless, but everyone has both the opportunity and responsibility to voice their opinion in determining policy. Policy is determined by the democratic will of the majority through a party referendum, endorsing or rejecting conference decisions.

In or out of Europe doesn’t matter. We’re looking for a real change. Not the kind of change that puts a different set of leaders in charge of the same old system. We’ve got a system which is ruled by money and the drive for profit and by its nature it causes insecurity, divisions and conflicts between people and grotesque inequality. It allows the world’s richest 85 people to own more wealth than half the world’s population put together.

This obviously won’t do. The Socialist Party of Great Britain stands for the kind of change that in Wales, Europe and over the whole planet and calls upon people to vote for a free access society without money and wages, without borders, without leaders and led. It’s a society based on democratic co-operation in using the world’s resources rationally to feed, clothe, house and give a decent life to everyone. It’s not a utopia either, it’s a real tangible prospect and more and more people are seeing that. Social consciousness is the key to this common ownership society and that’s what we’re trying to achieve by asking people to vote for us on May 22nd.

(If no SP/WSM candidate - spoil your ballot paper)
Posted by ajohnstone at 12:48 am