The elections in Europe may go unnoticed by the U.S. media but the underlying current speaks very loudly. Europeans are very angry. We see this through gains being taken on by far more extreme groups. There are many reasons for this voting trend but one glaring one is young adult unemployment and underemployment. In the European Union, 12 countries now face an unemployment rate of 20 percent or higher for those 25 and younger. Little relief has come to this group. Many are with a college education but no employment market to practice what they have learned. The recipe of course is one where discontent grows and we saw this with the latest voting results. You also see a similar trend in the U.S. where a historically high number of young adults are living at home late into adulthood. This is partly due to the low wage employment market they are entering but also, the incredibly high levels of student debt many students exit college with. While global stock markets seem to have recovered, young adult unemployment is mired in problems.


Young and looking for work

People have a hard time understanding that work is more than a paycheck. For many people it gives them a sense of contributing to society and also a feeling of providing for their family. During the Great Depression, you had some that worked for reduced wages or promises of payment at a later date simply to avoid the crushing blow of being without work. Today, we face similar actions being taken by young adults working for reduced wages and benefits as they enter the low wage workforce. Many take on near illegal non-paid internships just to gain experience to build up their resumes.
One of the big issues at hand is the race to the bottom when it comes to wages. This is one of the many reasons why Europe is mired in problems especially with young adult unemployment.
Let us take a look at the unemployment rates across Europe: 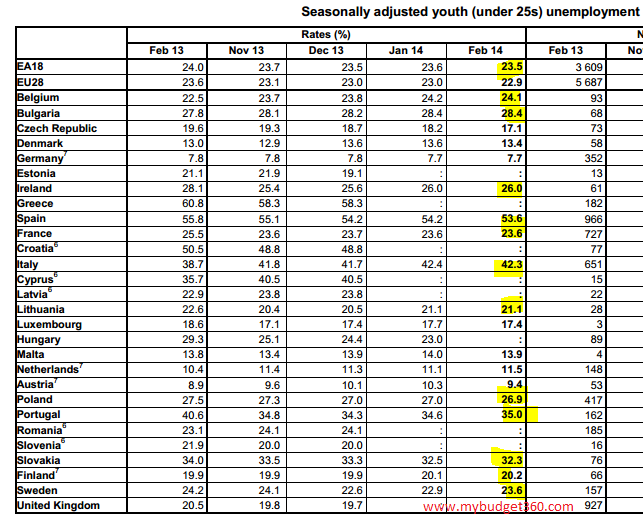 
12 countries in Europe have an unemployment rate of 20 percent or higher for those 25 years of age and younger. Some of the notable standouts:

This is extremely problematic. Many countries have layer upon layer of bureaucracy and cronyism and this has created a massive problem on a global scale for these countries. Unfortunately these countries cannot compete with the low wage employment trend that is overtaking the globe.

While the stock market has been on a one way ticket up, young adult unemployment has followed a similar trajectory, for the worse: 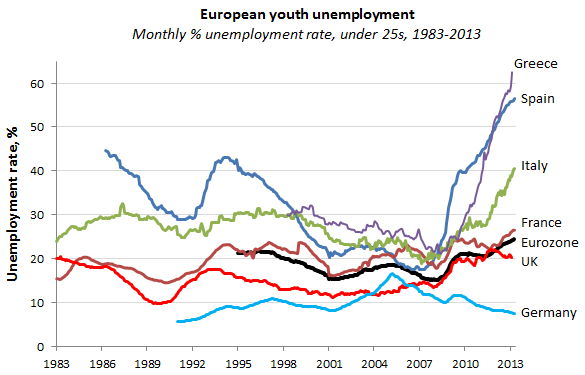 Having your youth facing a prospect of a gloomy future when it comes to work results in extreme voting as you recently saw.

Young and not working in the U.S.

The U.S. is not immune to this. We have a shift with young adults and their working habits: 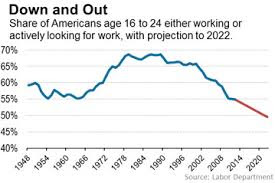 This is an interesting trend. In the 1990s we had 65 percent of those 16 to 24 either working or actively looking for work. Today it is down to 55 percent, a multi-generation low. Now we can attribute this to people going to college but many are simply going to college to avoid looking for work. More troubling is the fact that many are being lured into back breaking levels of debt that are causing irreparable damage even before they have a diploma in hand.

Nearly half of young adults in the U.S. are either underemployed or unemployed. Underemployed signifies that people are working in a job that does not require a college degree. Will this high unemployment rate in young adults result in more dramatic voting as it did in 2008? Many feel disenfranchised because it appears that more of the same had resulted with that vote. The wealth disparity grows as the standard of living slowly gets chipped away for the middle class. Student debt since then has ballooned as well outpacing any reasonable rate of inflation.
Having the young in your society unemployed or underemployed at these levels rarely results in anything positive.

Prospects for the majority are poor and getting worse. This is how capitalism works - profits for a small minority and servitude for the vast majority. It doesn't have to be like this, however. When enough of us recognise the good sense behind 'from each according to ability to each according to need' and get on with the job of building socialism then there will be enough 'work' for everyone to be able to make their contribution and consequently be in a position to satisfy their needs without being made to feel they are a burden on society.
JS