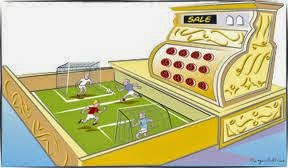 Another football season draws to a close and another World Cup approaches.

Unlike some other types of sports considered elitist, football (soccer to our American blog visitors) owes its popularity and success to the fact that it is commonly known as being the sport of the poor. However, this popularity turned out to be more of a curse than a blessing to the sport adored by millions worldwide. The immense popularity of football and its huge following has caught the attention of business conglomerates sniffing around for promising opportunities to maximize their returns. Media moguls, oil tycoons, sovereign wealth funds and sheikhs united behind the desire to diversify their portfolios are in quest for the next goose that will lay golden eggs. In this case, that goose is football. These investors all of a sudden figured out how investing in an untapped territory and lucrative business like football will make them even richer.

This influx of money introduced by these companies has contributed the improvement of football in many aspects, according to some observers of the game,  such as signing more talented players, building beautiful stadiums, and snatching teams from relegation and bankruptcy but many others agree with the fact that these deep-pocketed titans have hijacked the sport and turned it into a ruthless industry unaffordable to the sheer numbers of diehard fans.

Contrary to all the principles it was built upon, football has now become more and more an commercialised and expensive experience. Lifelong football followers are no longer capable of affording the soaring prices of tickets to watch games, and the broadcasters who own exclusive broadcasting rights to games are putting significant barriers before the fans through outrageous subscription fees. Qatari-owned and funded beIN Sports formerly Al Jazeera Sports, won over the exclusive rights to broadcast first class football competitions, including the FIFA World Cup 2014 in Brazil. The company has made sure it puts technical and legal measures disallowing those who will hack into the content it provides making it almost impossible to watch the FIFA games or any other major league or tournament outside the beIN Sports realm. Unfortunately the beIN monopoly will deprive millions of poor people in the Arab world from the joy of watching the sport of the poor, because not everyone can afford to pay extra subscription fees (It charges new subscribers about $250 for an annual package that includes games from the upcoming tournament in Brazil) and buy a special beIN satellite receiver especially in these dire economic times.

Roman Abramovich, a Russia oligarch, decided in 2003 to pump millions into a mediocre Chelsea with a popularity that did not exceed its stronghold in London (and perhaps certain sections of Glasgow.) The cash flow turned the Blues into a world class team that nowadays rivals the continent heavyweights like Real Madrid and AC Milan. Sheikh Mansour from the UAE took over Manchester City. The Sheikh started splashing hundreds of millions of pounds buying players with ridiculous  wages without worrying too much about defying or breaching financial fair play (FFP) regulations (paying the subsequent fines as another operating cost). The team won two Premier Leagues in the last three years and it is expected to more domination over English football in the years ahead. Qatar bought the French team Paris Saint-Germain, spent couple hundreds of millions, and ever since PSG are the crowned champions of France’s Ligue 1.

The money flow has turned football into a business rather than a sport and athletes into merchandise. Players now care about the lavish deals, the sponsorship contracts and they forgot about the attachment with the fans and the roles they should play in society. Football is no more about the values of sportsmanship and competitiveness. It is now a hostage in the hands of greedy businesses who only seek to make profits at the expense of the most important part of any sport: the fans.