We Shall Rise Again 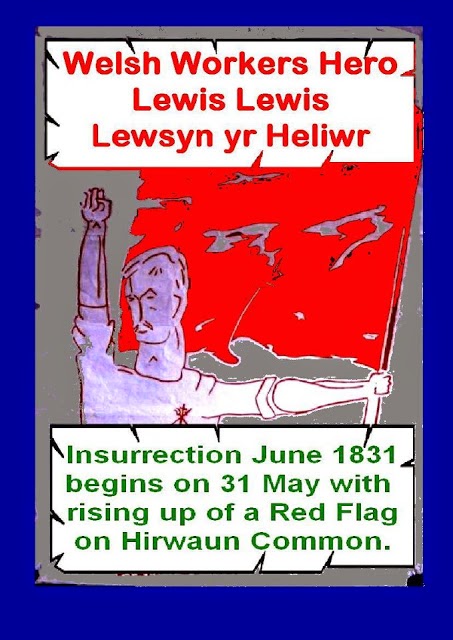 The Merthyr Rising Festival will be held on 31 May 2014, a date which marked the beginnings in 1831 of the Merthyr Rising. The Festival will be centred at Merthyr’s Soar Arts Centre with events also being held throughout the day in Merthyr’s new Dic Penderyn Square, named for Richard Lewis – the 23 year old martyr of the 1831 Merthyr Rising. There will also be fringe events happening in pubs throughout the town centre, as well as events in the Cyfarthfa Castle Museum, former home of the Crawshay Ironmaster family, whom much of the anger of the 1831 Merthyr Rising was directed. Amongst the artists appearing at the Festival will be Gruff Rhys (Super Furry Animals/Neon Neon), Kizzy Crawford, Jon Owen, Delyth McLean and Boyd Clack – and lots more speakers, musicians, writers and speakers are confirming each day.

At the beginning of the 19th century Merthyr Tydfil was a sleepy village on the edge of high moorland. By 1830 it had quadrupled in size to become the largest town in Wales, its population mainly workers and their families in the iron and coal industries. It was the centre for a newly formed working class, described by contemporary Tory newspapers as "revolutionary forgemen, Jacobin moulders, democratic colliers and demagogic furnacemen"

The 1831 Rising was one of the earliest organised actions of industrial workers in 19th Century Britain and set against the background of the 1829 depression in the iron industry which was to last for three years and was sparked by anger against low pay, debt and appalling working conditions in the iron works and mines of the Welsh Valley town. It has been described by one historian as "the most ferocious and bloody event in the history of industrialised Britain."

Throughout May 1831 the coal miners and others who worked for William Crawshay took to the streets of Merthyr Tydfil, calling for reform, protesting against the lowering of their wages and general unemployment. Gradually the protest spread to nearby industrial towns and villages and by the end of May the whole area was in rebellion, and for the first time in the world the red flag of revolution was flown, banners capped with a symbolic loaf and literally dyed in blood ( calf's blood to create a symbol of common suffering and of equality of humankind.)

After storming Merthyr town, the rebels sacked the Debtor's Court (the Court of Requests) which was responsible for a widespread confiscation of property and where the goods that had been collected.  Rising prices had caused severe hardship for many of the working people of the area and, in order to survive, many people were forced into debt. Often they were unable to pay off their debts and their creditors would then turn to the Court of Requests which had been set up in 1809 to allow the bailiffs to seize the property of debtors. As a result the Court was hated by many people who saw it as the reason for their losing their property. Account books containing debtors' details were also destroyed.

Among the shouts were cries of Caws a bara (cheese and bread) and I lawr â'r Brenin (down with the king). On 1 June 1831, the protesters marched to local mines and persuaded the men to stop working and join their protest. In the meantime, the British government in London had ordered in the army to restore order. Since the crowd was now too large to be dispersed, the soldiers were ordered to protect essential buildings and people.

On 2 June, while local employers and magistrates were holding a meeting with the High Sheriff of Glamorgan at the Castle Inn, a group led by Lewsyn yr Heliwr (also known as Lewis Lewis) marched there to demand a reduction in the price of bread and an increase in their wages. The demands were rejected, and after being advised to return to their homes, attacked the inn. Engaged by the soldiers, after the rebels seized some of their weapons, the troops were commanded to open fire.  In the resulting panic and mass confusion, over two dozen workers were killed and hundreds wounded, but the soldiers lost 16 men and were compelled to withdraw to Penydarren House, and abandon the town to the rebels. For four days, magistrates and ironmasters were under siege in the Castle Hotel, and the protesters effectively controlled Merthyr. Strikes started in Northern Monmouthshire, Neath and Swansea Valleys.

On the Sunday 6th, 450 troops marched to the mass meeting at Waun above Dowlais with levelled weapons, the meeting dispersed and the uprising were effectively over. By 7 June the authorities had regained control of the town through force. The rising at Merthyr caused great alarm to the British Government, who feared that the Colliers Union was behind it. The setting up of lodges of the Union at Merthyr immediately afterward seemed to support this view. Twenty-six people were arrested and put on trial for taking part in the revolt. Several were sentenced to terms of imprisonment, others sentenced to penal transportation to Australia, and two were sentenced to death by hanging – Lewsyn yr Heliwr (also known as Lewis Lewis) for robbery and Dic Penderyn (also known as Richard Lewis) for stabbing a soldier in the leg with a seized bayonet. Lewsyn yr Heliwr had his sentence downgraded to a life sentence and penal transportation to Australia.

The people of Merthyr Tydfil were convinced that Dic Penderyn, a 23-year-old miner, was not responsible for the stabbing, and 11,000 signed a petition demanding his release. The government refused, and Penderyn was hanged at Cardiff market on August 13, 1831. On the night before the execution, the unhappy convict was urged to make a confession of his guilt, but he positively denied that he had been in any way connected. He continued firm in this declaration up to the time of his death. Forty years later, leuan Parker of Cwmafan, a Welshman living in the United States confessed to the charge and also a witness for the prosecution, James Abbott, who had testified at Penderyn's trial, admitted that he had lied under oath, under the orders of Lord Melbourne, in order to secure a conviction.

It's generally accepted that the Merthyr Rising of 1831 was in many ways part of the general British struggle for political reform, which would be the basis of a later much stronger Chartist Movement and also part of the struggle to establish Trade Unionism.   Merthyr Tudful was in a ferment of discontent and disturbance culminating in a great Reform Rally at Twyn y Waun on 30 May 1831. School textbooks tend to concentrate on Peterloo and the Tolpuddle Martyrs while evens such as the Merthyr Uprising is air-brushed out of the pages of history.