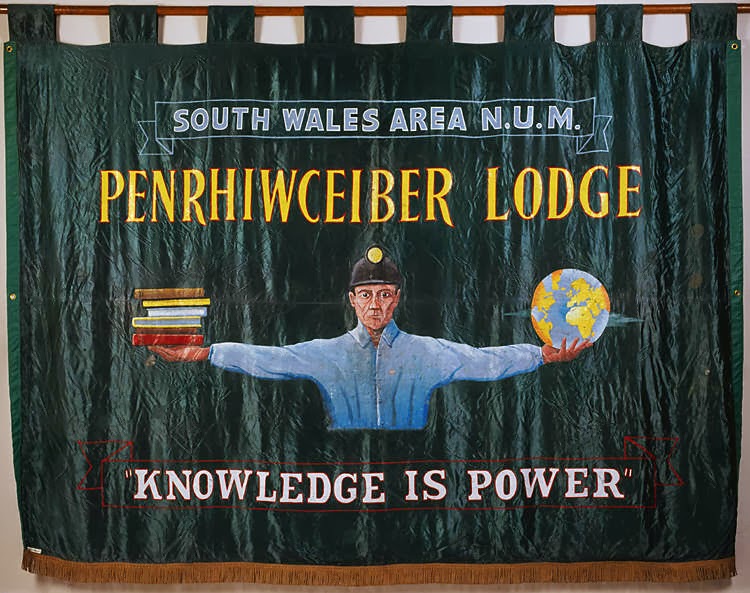 2014 may be the year to remember the Great War but it is also the time to recall the class war of the 1984/5 Miners Strike. More than 11,000 people were arrested during the strike and more than 8,000 were charged. In September, 1984, the High Court ruled that the NUM had breached its own constitution by calling a strike without first holding a ballot and ordered sequestering of the union funds until by the end of January 1985, around £5 million of NUM assets had been confiscated. Scotland was different where the court ruled that Scottish miners had acted within their rights by taking local ballots on a show of hands and so union funds in Scotland could not be sequestered.

The government mobilised the police (including the widely despised Metropolitan Police) from around Britain to stop the pickets preventing the strikebreakers working. Many picketers were subject to intimidation and violence from the police. Police stopped pickets travelling between pickets on the spurious legal grounds. Stella Rimington (Director-General of MI5) published an autobiography in which she revealed MI5 'counter-subversion' exercises against the NUM and the striking miners, which included the tapping of union leaders' phones.

Many have seen this as class warfare. No longer was this an industrial dispute but instead it was a challenge to British democracy and hence the British people. The miners in the words of Thatcher were the ‘enemy within’ and she proceeded to declare war on mining communities. The media portrayed strikers with an obsessive one-sided reporting of the 'violence' of  unarmed men and women who, in the end, offered little serious challenge to the truncheons, shields and horses of a well-organised and strategically- deployed para-military police force.

The strike proper started on March 1 1984, when George Hayes, the South Yorkshire NCB director, announced that Cortonwood would close in five weeks time. Six days later Ian MacGregor announced plans to cut 20,000 jobs. The NUM activist Dave Douglass explains “Nobody is crying for a ballot, because it is the other side that has launched the attack on us, and we are simply responding to it. Miners see stopping the assault as the task, not sticking to the terms of rules drawn up for premeditated and long-considered action.” (Weekly Worker July9 2009) Douglass goes on to point out that ‘The myth that the strike was down to one man comes about for two reasons: the press wants to believe it true because it fits in with the idea that Scargill was a labour dictator who had some sort of magnetic hold over our minds; secondly, Arthur likes to play up his own importance in everything he was involved in.’
So, whatever he may or may not have claimed to the media, it was not Arthur Scargill who called the strike - he had no constitutional means of doing so.

The issue of whether a ballot was needed for a national strike had been complicated by the actions of previous NUM leader Joe Gormley. When wage reforms were rejected by two national ballots, Gormley declared that each region could decide on these reforms on its own accord. Scargill did not call a ballot for national strike action. Instead, each region was permitted to call its own strikes, imitating Gormley's strategy over wage reforms. It was argued that 'safe' regions should not be allowed to ballot other regions out of jobs. This decision was upheld by another vote five weeks into the strike. Many miners, especially at the threatened pits, were also opposed to a ballot because of the time required to organise one and the urgency of the situation arising from the accelerated closure programme.

The decision to strike was made and could only be made by the members themselves. The NEC met on March 8 and ruled that it would endorse, as official, strikes against closures in Scotland and Yorkshire which they presumed would result from the branch meetings.  From March 12 every pit in Yorkshire was out, with the enthusiastic mass support and votes of the members. The decision to strike was taken at pitheads, by the members, over the weekend of March 10-11.  Rule 41 endorses area strikes as official while  rule 43 stipulates that national strikes could only be called by a national ballot. The situation was an area was seeking the support of another area by picketing and requesting solidarity action. It de facto became a national strike.  Every area had debated whether to have a ballot and every branch in Britain voted on the question.  The miners were not denied the right to have a ballot and all the evidence shows that the strikers would have won such a national ballot anyway - the NCB commissioned opinion polls which confirmed that a strike vote would be successful. At a conference in Sheffield the Kent Area opposed holding any ballot and this was seconded by Yorkshire. The Kent resolution gained 69 votes, with 54 against. Whether this decision was tactically sound is another question, but it was not Arthur Scargill’s decision to make. Like the strike itself, it was the miners themselves who took it.

Nottinghamshire produced 20,000 out of 27,000 miners in the county voting against the strike.  To add insult to injury the scabbing miners  the area later voted by 20 branches to 11 to lift the overtime ban too. So it was not enough to break the strike five days a week, eight hours a day: they voted to put in extra hours to do it!  There is something in the culture and political perspective of the Nottingham miners which is out of step with the rest of the coalfields. During the 1926 lock-out the number of men breaking the stand-out and working was, by October 1926 64.8% in Nottingham rising to 80.3% by November. In regards to forming the breakaway UDM. a very similar situation also occurred also in 1926 with the creation of  the Spencer ‘non-political industrial union’. There is a brand of left workerism which refuses to see ‘ordinary workers’ as ever being at fault and prefer to blame false leaders but scabs are responsible in the final analysis for their own actions and their own lack of courage.

In Nottingham area communities were overwhelmingly dominated by scab miners and were praised by the media as heroes, and it was the strikers who were the ‘scabs’. The strikers had to walk from the picket lines through villages full of real scabs and go home to streets full of real scabs. The graffiti, the cat-calls, the violence, the threats, the intimidation of families - it was all anti-strike. The Notts strikers were blamed for everything the pickets did across the country,  and would be avenged by victimising the vulnerable minority in Notts.

The personal pain and the day-to-day struggle is reflected in the published diary of John Lowe, a coalface worker at Nottingham Clipstone colliery, who was neither a branch official nor a member of the branch committee. He describes the civil war nature of the strike that caused families to divide. ‘My position is this. My wife is 101% behind my stand. Two sons are scabs, as is a son-in-law at Mansfield colliery. A row developed in which a daughter-in-law decided that her view was totally right, hence a split. The rest of the family then isolates both of us for a while … For many weeks my wife cried herself to sleep nightly, and awoke each morning in the same state … It was like a knife twisting inside me. The hardest part was not seeing our grandchildren - the worse scenario which I could not have envisaged ...’

The toughest battle for the miners and their families was not on the picket line or at Orgreave, but back within the four walls of the family home.

Lowe also describes in his diary how “As the strike wears on and the bitterness in the close and tight-knit villages increases, a veritable war is unleashed on the strikers and their families: abusive letters, phone calls and graffiti, escalating to smashed windows, wrecked cars and physical attacks; arrests and intimidation by police; blanket bail restrictions and hefty penal sentencing by the courts; victimisation and sackings by the Coal Board; stonewall indifference from the benefits agencies. On top of all this, the lack of financial back-up and tangible solidarity which those of us in the solid areas came to take almost for granted." and  he recollects how when the strike ended “We in Notts … had to return without the fanfares and publicity. There were no bands to lead our lads through the villages and into the pit yards; there were no cameras to show our defiance in the face of defeat; people did not line the streets of our pit villages. This was Nottinghamshire; we were a minority and surrounded by hostility.”

It is beholding to the Socialist Party to place the Miners Strike in perspective and it is ably done by  Ian Isaac, lodge secretary of St John’s Colliery, Maesteg and member of the South Wales executive plus a member of Militant Tendency in ‘When we were Miners'.

‘The miners’ strike was not the catalyst for the revolutionary overthrow of Britain and the setting up of workers’ councils (soviets) out of the miners’ support groups and women’s support groups. This was never a possibility, given the balance of forces at the time. The work of the miners’ support groups had an enormous, uplifting impact on morale, but they were not soviets in waiting. The strike was a “political civil war without guns”, in the words of Ken Smith [Chairman of the NUJ in Wales.] ...” He added that ‘There should have been one union for mineworkers, whether as underground or surface workers, craftsmen, deputies or overmen. If there had been one union instead of a dozen, then a different outcome historically could have been achieved.”
It could be argued that the biggest turning point in the whole dispute was the decision by the Nacods leadership to permit their own 80% ‘yes’ strike ballot to expire and sign up to a unilateral deal, which, as time would tell, did not save one job or one pit.

Much of the above information has been gleamed from articles and letters by Dave Douglass, former executive committee member of the Yorkshire area NUM and one time Class War activist, published in the Weekly Worker.
Posted by ajohnstone at 1:03 am