Law and order or to protect the old order? 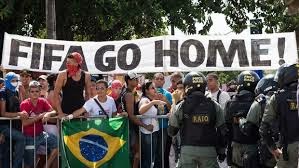 Brazil has relocated more than 15,000 families out of slums that have been evicted and destroyed to make way for sports-related facilities, and that number could increase to 100,000 by the end of the Olympics two years from now.

More than 130,000 people live in the Complexo do Mare. 1,000 military police began to occupy one of the many shanty towns in Rio de Janeiro, as dawn was breaking with  21 armoured vehicles in support. They were also accompanied by trucks deploying hundreds of police patrols; pickups carrying more officers with weapons held aloft; the mounted regiment and the dog unit. Thousands of troops are expected to arrive this week to continue the process, and will stay indefinitely. Authorities are hoping to prevent violence in the city’s favelas affecting the city during the World Cup.

With the World Cup just two months away, the favelas represent the biggest security crisis facing Rio since it launched the police pacification units programme five years ago. Authorities are hoping to prevent violence in the city’s worst favelas affecting the city during the World Cup.

The situation has been exacerbated by extra-judicial killings of slum dwellers by the police. Twenty-five officers will stand trial this year over the disappearance and murder last July of Amarildo, a labourer from the Rocinha favela; and another three officers were arrested this month after they were caught on camera dragging the body of a dying woman 350 metres along a road from the back of a police van. Witnesses from the Congonha favela where the victim, Claudia da Silva Ferreira, lived allege that officers shot her and tried to cover up the deed.

The government and the olice blame drug traffickers for the new offensive. Others say the main problem is that pacification has not been followed by improvements in social services and infrastructure despite promises from politicians. Adding to the tension are human rights violations by police, which add to the widely held impression in the favelas that they are no better – and often a lot worse – than the gangsters they replaced.

Those in the favelas may be especially distrusting because of the “history of the police treating the people living in the favelas as if they are all criminals,” Amnesty International secretary general Salil Shetty wrote in August. Shetty also wrote that pacification has also threatened the basic rights of residents, as police “routinely invade people’s homes without a search warrant, destroy what they don’t want, confiscate that which may be of value and too often threaten or beat the residents.”

“Those of us who live here are stuck between the gangs and the police; we don’t know who is really going to control this place,”  one resident of the Mare slum told the AP.

Although the spotlight is on Rio, this is by no means the most dangerous of Brazil's cities. According to a recent study by the Mexico-based NGO, Citizen's Council for Public Security and Penal Justice, Brazil has 16 of the world's 50 most murderous cities – more than any other country. Six of those cities will host World Cup games – Fortaleza, Natal, Salvador, Manaus, Recife and Belo Horizonte. Rio does not even make the list.

The word “slums” conjures up certain images. The word ‘slum’ originated from the Irish phrase ‘S lom é’ meaning ‘it is a bleak or destitute place.’ According to the UN-HABITAT definition, a slum is a run-down area of a city characterized by substandard housing, squalor and lacking in tenure security.  The Rio-based NGO Catalytic Communities, however, points out that “This description doesn’t apply to the vast majority of favelas in Rio: the primarily brick and cement houses are built well and to last; conditions are not squalid, with running water, electricity, garbage collection and Internet access, though of low quality, reaching the majority of homes. Anyone who has visited a favela can attest that they are for the most part vibrant places that buzz with life and activity.”

The Nation correspondent Dave Zirin explains the World Cup and Olympics were being used as a pretext to depopulate and then develop the valuable land where the favelas sit. “There is a real estate speculative boom taking place in Rio, and only so much land. Once unheard of, Rio’s wealthy are now looking at the hillside favelas and see the future of residential and commercial development. This is particularly true of areas that could be parking lots, athletic facilities, or security zones for 2016 Olympic construction. The problem is the pesky people who happen live there. Characterizing favelas as slums aids the depopulation effort. None of this is to romanticize the very real poverty, crime and challenges that do exist in the favelas. Yet it is difficult to grasp how military occupation helps improve these problems or further stabilize these communities. In other words, we have another war on poverty that looks more like a war on the poor.”

Christopher Gaffney, Rio activist and former professional soccer player, said, “The continued expansion of Rio´s ‘pacification’ program in strategic areas pertaining to Rio de Janeiro´s tourist, sports and transportation infrastructure has the look and feel of a counterinsurgency. While there are undeniable benefits to expelling armed drug traffickers from low-income communities, the military occupation has not been accompanied by equivalent investments in other necessary infrastructures. A military police can only treat citizens as potential enemy combatants. The World Cup and Olympics are doubling down on this model, which has tremendous human costs that are borne by those least prepared to bear them.”

Then there was the site of the raid itself: Maré, a complex of 15 “slums”. Maré may be the most politically active of all of Rio’s favelas, with, according to Catalytic Communities, “more than 100 community organizations and NGOs.” Last June, after a deadly BOPE (Brazilian special forces police) raid into Maré, a series of protests and creative civil actions took place. This is not a community that will stand by silently.

Brazil's government, in conjunction with FIFA, has chosen to turn a soccer tournament into a real estate land grab. They have done this without regard for the people who happen to be living on the land.