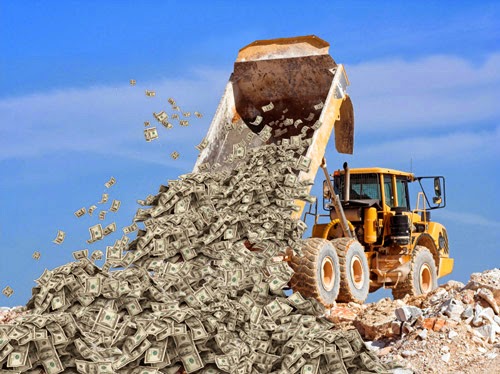 This is the amount of cash that S&P 500 companies (excluding banks and other financial institutions) are currently sitting on. As of the beginning of the third quarter, the largest U.S. companies collectively held $1.27 trillion. That’s about 13.5 percent more than this time last year. Where is this cash coming from? Mostly, it’s that companies are simply generating cash faster than they are spending it. The widening difference between cash inflows and outflows has allowed businesses to sock away $150 billion over the past twelve months. As a result, cash stockpiles have ballooned from $1.11 trillion to $1.26 trillion -- an increase of $411 million per day. Businesses are swimming in cash.

Corporate America has never been as flush with cash as it is right now. If you converted all this money into $100 bills and stacked them up, the pile would stretch 800 miles high. And if it was spent at the rate of $250 million a year, it would take 5,100 years to exhaust the supply.

Just in the past six months, 1,030 companies that have given dividend increases that will put an extra $29.5 billion in shareholders' pockets annually. And there has been even more spent on stock buy-backs. Combined, companies committed $164 billion toward these two shareholder-friendly activities last quarter. That's enough money to give every man, woman and child in America a check for $520. Yet these record distributions haven't put a dent in corporate cash balances -- they're still building by the day.

Corporations have been largely excused from paying taxes. The Government Accountability Office found earlier this year that the average effective tax rate on U.S. corporations is only 12.6 percent of their income. In 1952, corporate income tax revenues totaled 6 percent of GDP. The average during our enormous post-war economic expansion, between 1945 and 1970, was more than 4 percent of GDP. Since then, in every year, it has been less than 3 percent. In 1983, Reagan’s tax breaks knocked corporate income tax revenue as a percentage of GDP all the way down to 1 percent. It returned to that pitifully low level in the first year of the Obama’s “socialist” administration, and it has remained below 2 percent. No wonder the corporate cash pile keeps growing and growing and growing.

How are people coping?  11 million unemployed and more than 7 million in part- time jobs, but can’t find full-time work. And in the past 10 years, the U.S. labor force participation rate has shrunk by 3 percent.  the existence of all those people without jobs—what Marx called a “reserve army of the unemployed”—still fuels poverty by decimating wages. Desperate people bid down the price of labor simply to survive. Average wages, adjusted for inflation, haven’t increased since the 1970s. America is becoming a nation of cheap labor. The notion that those burgeoning business profits somehow will magically increase wages and create jobs is delusional. They haven’t, and they won’t. Businesses see labor simply as a cost. Business tries to reduce that cost as much as possible, in order to boost profits as much as possible. Business is not in the business of creating jobs. Business is in the business of maximizing profit. Business hires labor only when it can make a profit from that labor. If any business could eliminate its labor force entirely, it would. And many actually do just that, through subcontracting, out-sourcing, off-shoring and other measures that reduce compensation or eradicate the labor force.

According to a University of Michigan report, around 1 in 5 households in America has a negative net worth—they owe more than they own. In addition 48 million Americans have no health coverage, and 48 million rely on food stamps to stave off hunger. The Gini coefficient— a statistical measure of income inequality—places the United States between Venezuela and Uruguay, with far more inequality than every major European or East Asian nation. US inequality is surpassed largely by a bunch of African countries. The 400 individuals on the Forbes 400 list alone have accumulated more than $2 trillion in wealth, the great majority of which remains in their pockets year after year.  If the richest 1% is taking half of everything, then that just doesn’t leave very much for the other 99%.

From here and here

Posted by ajohnstone at 1:13 pm

Email ThisBlogThis!Share to TwitterShare to FacebookShare to Pinterest
Labels: cash