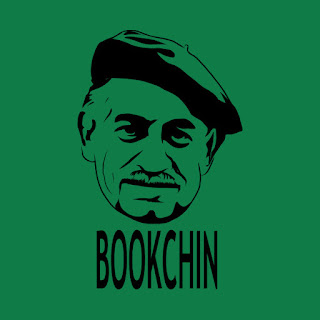 14th of January marks 100 years since the birth of Murray Bookchin. Although there are differences in his and his supporters view with our own, there are also many similarities that we should not ignore or neglect. Murray Bookchin , too, stands for a class-free, state-free society of common ownership in which money becomes redundant and the principle “from each according to their ability, to each according to their needs” applies. He recommends Marx’s analysis of how the capitalist economic system works when he says, “As a study of the capitalist economy as a whole, it [Capital] has no equal today. Marx’s economic studies are central to any socialist analysis”.

His ideas described as ‘social ecology’ were always directed towards radical social change and have influenced many around the world, particularly recently in the Kurdish enclave Rojava. While not socialism there, people living in Rojava inspired by Bookchin’s libertarian thought are able to directly contribute to decisions affecting their community, and there is more gender equality and less sectarianism than elsewhere in the region. Likewise, Bookchin views the Spanish Civil War not as a struggle to defend a discredited and treacherous republican regime but to create a social revolution in Spanish society. While we in the World Socialist Movement may not always agree with the attempts to build socialism, this sort of discussion should be of concern to all of us attempting to build libertarian forms of organisation that can begin to challenge capitalism.

Bookchin developed a political programme known as ‘libertarian municipalism’ which he saw as a method for getting from our present society of minority control and environmental destruction to a new rational and ecological society of mass democratic control. Bookchin shares with the World Socialist Movement the belief that workers must run society themselves with the use of leader-free organization. The basic building block of libertarian municipalism is the community or neighbourhood assembly, face to face meetings where citizens meet to discuss and vote on the issues of the day. These assemblies elect mandated and recallable delegates who then link with other assemblies forming a confederated council, a ‘community of communities’. The difference between this form of delegate democracy and our current form of representative democracy is that in a representative democracy power is given wholesale to the representative who then is free to act on their own initiative; in a delegate democracy the initiative is set by the electing body and the delegate can be recalled at any time should the electing body feel that their mandate is not being met, thus power remains at the base.

“The movement . . . will be shaped by the people it has tried to assimilate and not the people by the movement”. (On Spontaneity and organisation.)

Murray Bookchin is one contemporary thinker and writer who comes close to us on a number of key points. Despite some significant differences there is much that the WSM would agree with and find of use.

In his writings, Bookchin defends rationalism, science and technology against the current trend of New Age mysticism and life-style culture that has spread among the environmentalist movements. He also opposes so-called “identity politics”, seeing this as essentially seeking a better deal for women, gays and blacks within capitalism as well as being divisive.

Bookchin took up basically the same position as us that, for humanity to produce and consume in ecologically acceptable ways, it must first replace capitalism and its drive to make profits with a system of common ownership, democratic participation and production for use, which can make full use of modern science and technology but for ecological and human ends instead of profit. According to Bookchin, the ecology movement has a choice: either it can realise that capitalism is the cause of ecological damage and work to end capitalism or it can retreat into “ecomysticism” blaming science, technology and reason as such, calling on individuals to adjust their personal lifestyles so as to better attune with “nature”.

Murray Bookchin points out in ‘Remaking Society’ that human beings are both a part and a product of nature; that humans do have a unique significance in nature since they are the only life-form capable of reflective thought and so of conscious intervention to change the environment. It is absurd to regard human intervention in nature as some outside disturbing force since humans are precisely that part of nature which has evolved that consciously intervenes in the rest of nature. Bookchin describes the human species as the brain and voice of nature, nature becomes self-conscious, so to speak. But to accomplish this, humanity must change the social system, a change from capitalism to a "community where each contributes to the whole to the best of his or her ability and takes from the common fund of produce what he or she needs." Bookchin explains, "The earth can no longer be owned; it must be shared. Its fruits, including those produced by technology and labour, can no longer be expropriated by the few; they must be rendered available to all on the basis of need. Power, no less than material things, must be freed from the control of the elites; it must be redistributed in a form that renders its use participatory."

Some Greens blame modern technology rather than the use — or, more accurately, the abuse — that is made of it under the present system. Bookchin answers:

"To substitute words like industrial society for capitalism can thus be misleading . . . To speak of an 'industrial society' without clear reference to the new social relations introduced by capitalism, namely wage labour and a dispossessed proletariat, often wilfully endows technology with mystical powers and a degree of autonomy that it does not really have. It also creates the highly misleading notion that society can live with a market economy that is 'green', 'ecological', or 'moral', even under conditions of wage labour, exchange, competition and the like. This misuse of language imputes to technology - much of which may be very useful socially and ecologically - what should really be directed against a very distinct body of social relationships, namely, capitalistic ones.”

Bookchin is explicit that what is required is a change from capitalism to a "community where each contributes to the whole to the best of his or her ability and takes from the common fund of produce what he or she needs":

"The earth can no longer be owned; it must be shared. Its fruits, including those produced by technology and labor, can no longer be expropriated by the few; they must be rendered available to all on the basis of need. Power, no less than material things, must be freed from the control of the elites; it must be redistributed in a form that renders its use participatory."

That was a good read which led to much knowledge earning.

Thank you for your time.

Just to give you another perspective, elcil, here is a different summary of Bookchin