The pandemic caused an "unprecedented" hit to the global economy last year, destroying the equivalent of 225 million full-time jobs, the United Nations has said. The economic blow from Covid-19 has cost workers around the world $3.7tn (£2.7tn) in lost earnings.

The crisis caused an 8.8% drop in working hours - four times more than followed the 2008 financial crisis. Working hours in 2021 are likely to remain more than 3% lower than they were in 2019 - roughly the equivalent of 90 million full-time jobs, predicts the report, by the UN's International Labor Organization (ILO). The ILO said roughly half of the hours lost were due to firms cutting back on work.

Employment also dropped by 114 million compared to 2019, as about 33 million people lost jobs, while the rest became "inactive" - either giving up work or looking for a job.

The UN said looking at job cuts alone "drastically" understated the damage. It also warned that recovery remains uncertain, despite hope that vaccines will spur an economic rebound. It cautioned that the downturn could be worse, if vaccine distribution is slow and global governments do not provide the economic stimulus expected.

"This has been the most severe crisis for the world of work since the Great Depression of the 1930s," said ILO's director-general Guy Ryder. 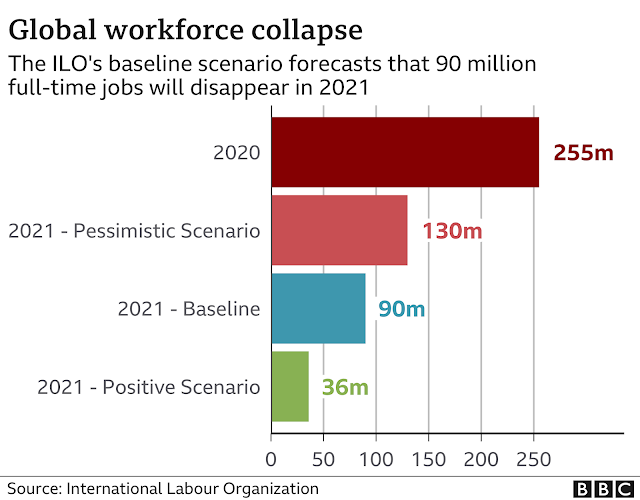