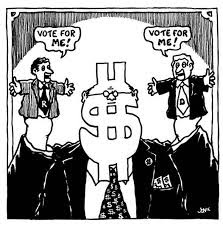 What are politicians for? What do they do?

At school we are taught that politicians are chosen by us, the voters, to represent us in the making of laws and in the government of our city, state, and country. This arrangement supposedly ensures that the views of the majority prevail – the essence of democracy (rule by the people).

This picture is not totally false, but it is also very far from the full truth. It does not account for the persistent divergence that researchers have found between policy outcomes and public opinion.[1] For example, no mainstream politician favors ‘Medicare for All’ even though the scheme has the support of a clear majority of Americans – 69% according to one recent poll.

The main problem with this picture is what it leaves out. It leaves out the most powerful people in our society, who are not the politicians but the capitalist class – that is, the wealthy and those who represent their interests in the top management of big banks and corporations. (There is admittedly some overlap between the two groups – Donald Trump, for instance.)

Almost all candidates for public office depend on capitalists for money – it is extremely expensive to stand for office – and for coverage in the capitalist-owned media. Capitalists play a crucial though largely hidden role in narrowing the range of choices offered to the voters.[2] Capitalists exploit this dependence to exert a strong influence on the processes of lawmaking and government, either directly or through lobbyists and trade associations.

To understand the role played by politicians we must therefore examine the triangular relations between capitalists, politicians, and voters. The basic relationship is that between the capitalist class and the mass of the population – the 1% and the 99%, to use the terms favored by the Occupy Wall Street movement. Apart from a few mavericks, however, capitalists prefer to remain in the shadows and deal with the public through hired intermediaries such as pollsters, specialists in Public Relations, and politicians. These people, and politicians in particular, are the public face of the capitalist class in the realm of public policy.

One institution specifically designed to facilitate interaction between politicians and capitalists in public policy is the American Legislative Exchange Council (ALEC). Founded in 1973 by conservative activist Paul Weyrich and a group of Republican state legislators, ALEC aims to ‘make national policy by acting incrementally at the state level.’[3] Through an array of ‘task forces’ – currently ten of them — ALEC prepares ‘model bills’ for the use of its members. State legislators belonging to ALEC need not know how to draft legislation: they can just select texts from ALEC’s online library of model bills, introduce them in state legislatures, and push them through the legislative process into state law.

The internal structure of ALEC accurately reflects the division of labor between capitalists as the power behind the scenes and politicians as their public face. There are two boards of directors – a public board consisting solely of state legislators and a ‘private enterprise board’ consisting solely of representatives of big corporations. Only the identities of members of the public board are made public. Meetings of task forces are held in secret, so outsiders do not know how the legislators and corporate representatives on them interact.

ALEC has recently extended its activity down to the city/county level by setting up a new division named the American City County Exchange ‘for local elected officials and the private sector.’

Of course, ALEC does not represent all local and state politicians – only those most subservient to the capitalist class. Nevertheless, it has an extensive presence and is very active. The Center for Media and Democracy has identified about a thousand current state legislators in all fifty states, mostly Republicans, ‘known to be involved in’ ALEC as well as hundreds of ALEC’s model bills and resolutions.[4]

How politicians talk to us

As we have seen, capitalists wish to conceal the extent of their influence from the general public. In general, they seek to minimize their presence as political actors in the public consciousness. That is why politicians, when they address the public, never so much as mention their close relations with capitalists. A taboo is placed on an essential aspect of their professional activity in order to sustain the pretense that the picture painted in civics textbooks corresponds to reality.

This also helps explain why communication between politicians and the public is so one-sided. They talk to the public. No opportunity is provided for open-ended dialogue. The only questions tolerated are those posed by establishment journalists who can be trusted to observe ‘the rules of the game’ — and politicians can evade even their questions with impunity if they wish. Members of the audience who interrupt politicians’ speeches with comments or questions – ‘hecklers’ – are ignored or told off like naughty children. They are liable to be thrown out or even beaten up.

Perhaps fearing that they may inadvertently break a taboo, politicians are loath to talk in public at length about substantive policy matters. Consider the victory speeches of Harris and Biden on November 7. Harris spoke first. Most of her speech consisted of vague rhetoric and personal recognition of colleagues, friends, and relatives, but she did devote a few carefully chosen words to policy issues (omitting healthcare, no doubt in deference to Biden’s opposition to ‘Medicare for All’). Biden said nothing at all about policy.

It is worth pondering why American politicians feel obliged to sacrifice their domestic privacy and put their whole family on public display, including young children or grandchildren – arguably a form of child abuse. Isn’t this a desperate attempt to compensate for the alienation caused by their structural inability to relate to their fellow citizens in an open and honest way? They cannot reveal to voters the factors that shape and constrain their policy positions, but at least they can grant them the illusion of an intimate connection. What should be private is made public because what should by rights be public has to be kept private.

The ultimate function of the politician is to be like a buffer protecting the capitalist class from mass discontent. In order to be effective as a buffer he may sometimes find it necessary to give voice to the grievances of ordinary people, but this need not lead to any corrective action.

Barack Obama was a master at this double game. Campaigning in the mid-West, he thundered against regional companies such as Maytag and Exelon. And yet these same companies, confident that he would do nothing to harm their interests, gave him large donations. Speaking to audiences of workers, Obama denounced Maytag’s decision in 2004 to close the refrigerator plant in Galesburg, Illinois, entailing the loss of 1,600 jobs to Mexico. But he never raised the issue with Maytag directors Henry and Lester Crown, despite his ‘special relationship’ with them.[5] Later, as president, having bailed out the banks during the financial crisis of 2008, Obama expressed dissatisfaction that they were continuing to operate as before. When he met with the CEOs of fifteen top banks in spring 2009, they complained about his ‘populist rhetoric’; his riposte was that his administration ‘are the only ones standing between you and the pitchforks’ – a vivid expression of the buffer metaphor.[6] Obama never did do anything to reform the banks.

Some politicians do not depend on capitalist donors but collect small donations from ordinary people. This occurs mostly at the local level, where campaigning does not require so much money. At the national level Bernie Sanders pursued this strategy with a measure of success in his bid for the Democratic Party presidential nomination. He broke the taboo and spoke openly in public about the dependence of his political rivals on ‘the billionaire class.’ I suspect that this, rather than any of his specific policy positions, is the main reason for the hatred that the political establishment has for Sanders.

However, when Biden won the nomination Sanders undertook to support him and stopped talking about this subject. Since then he too has observed the taboo. His silence has not sufficed to win him the trust of the establishment or a place in the new administration.

Politicians: public face of the capitalist class | World Socialist Party of the US (wspus.org)
Posted by ajohnstone at 12:29 am