Venezuela: The humanitarian crisis could get worse

If the Trump’s confrontational approach is adopted by the European Union it could bring oil production to a standstill, heaping more hardships on the 29 million Venezuelans.


Former United Nations rapporteur, Alfred de Zayas, who last year became the first UN rapporteur to visit Venezuela for 21 years, has criticised the US for engaging in “economic warfare” against Venezuela which he claimed was the real reason for the economic and humanitarian crisis facing the country. He also suggested in his recently published UN report, that US sanctions on the country are illegal and could amount to “crimes against humanity” under international law. De Zayas, is an American lawyer and former secretary of the UN Human Rights Council (HRC).  De Zayas recommended, among other actions, that the International Criminal Court investigate economic sanctions against Venezuela as possible crimes against humanity under Article 7 of the Rome Statute. In the report conclusions De Zayas, who is an expert in the fields of human rights and international law, went on to say the solution to the Venezuelan crisis lay "in good faith negotiations between the Government and the opposition, an end to the economic war, and the lifting of sanctions." The US imposed sanctions against Venezuela began in 2015 under President Barack Obama. De Zayas said modern-day economic sanctions and blockades are comparable with medieval sieges of towns. “Twenty-first century sanctions attempt to bring not just a town, but sovereign countries to their knees." He told the Irish newspaper, the Independent, “If you crush this government and you bring in a neoliberal government that is going to privatise everything and is going to sell out, a lot of transitional corporations stand to gain enormous profits and the United States is driven by the transnational corporations,” the former UN special rapporteur told The Independent. “Only the Venezuelans have a right to decide, not the United States, not the United Kingdom...What is urgent is to help the Venezuelan people through international solidarity – genuine humanitarian aid and a lifting of the financial blockade so that Venezuela can buy and sell like any other country in the world – the problems can be solved with good faith and common sense.”

"Venezuela could suffer a humanitarian catastrophe,” said Francisco Rodriguez, chief economist of New York-based Torino Capital. Rodriguez said the outlook is similar to what happened to Libya in 2011, after the Obama administration froze the government’s assets. In response, oil output in the North African country dropped more than 70 percent. If the showdown between Guaido and Maduro continues the economy would contract around 30 percent in 2019. He forecasts inflation will reach around 23 million percent from the 1.6 million it was in 2018.


Directives sent Friday to the U.S. Federal Reserve will make it very hard for Maduro to access Venezuela’s overseas assets and earnings, including those from Houston-based Citgo, a subsidiary of state-owned oil giant PDVSA and the major source of revenue for the bankrupt government. Also at risk is $1.2 billion in gold reserves — 15 percent of Venezuela’s foreign currency reserves — stored in the vaults of the Bank of England.

If he’s not getting paid, Maduro will surely divert the roughly 500,000 barrels per day of oil currently being sold to Gulf Coast refineries in the U.S. to more friendly markets, like creditors Russia or China, as well as India, Malaysia and Thailand.But processing international financial transactions is very hard without going through the U.S. or European banks. Transport costs would also jump because Venezuela’s ports aren’t well-equipped to load supertankers for transporting oil to such distant markets, said Russ Dallen, managing partner of Caracas Capital. “Maduro was already facing an incredibly complex situation. But the loss of fast cash from Citgo and the U.S. market will further crush the country’s decimated oil production and cash flows, meaning more starvation and more people fleeing the country.”

That means the country, which depends almost entirely on oil exports for hard currency, will be able to purchase even less food and other imports, exacerbating a severe recession.

Then there’s the $65 billion in Venezuela’s and state oil company PDVSA’s outstanding bonds, almost none of which are being paid and whose prices rallied 25 percent on news of Guaido’s challenge to Maduro’s authority. If the U.S. were to hand control of Citgo to people selected by Guaido, Maduro would almost certainly stop paying back loans to Russia’s Rosneft, which in turn would execute a lien giving it 49.9 percent control of the Texas oil company.

If Guaido prevails, Orlando Ochoa, a Caracas-based economist, said the U.S. will have to play a major role marshalling the support of international financial institutions, lifting sanctions and providing a debt shield to protect Venezuela from creditor lawsuits while the country gets back on its financial feet.


If Guaidó does take power, he will immediately be faced with more than $90 billion in outstanding debt, the vast majority of which is in default.

Creditors have already begun the rush to the courts, trying to turn those debts into judgments that can in turn be used to seize Venezuela's assets around the world. (Among those assets: Citgo, the giant oil refiner.)

Venezuela has an enormous and fractious range of creditors, including not only bondholders but also sovereigns (Russia and China are the two big ones), as well as corporations that have won international arbitration proceedings against the country.

All of those creditors have been waiting for the Nicolás Maduro regime to come to an end. At that point they will start laying claim to Venezuela's assets, which ultimately include some 300 billion barrels in oil reserves. That's the largest store of oil in the world.

For the record, Chavez was not a “21st century socialist” but a Latin American nationalist-populist in the tradition of Peron. True, the failure of The Bolivarian Revolution has been spectacular which only goes to show that there is no national escape from world capitalism 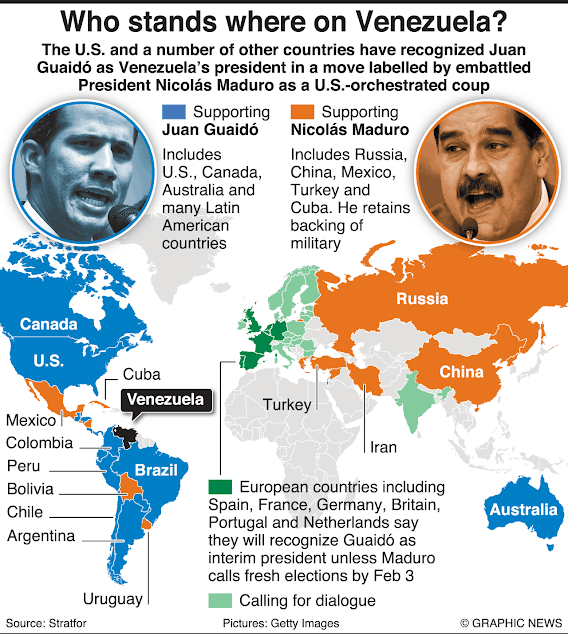 Posted by ajohnstone at 6:01 pm

The sanctions screw tightens
https://www.bbc.com/news/world-us-canada-47036491
"US Treasury Secretary Steven Mnuchin said the proceeds of the purchase of Venezuelan oil would now be withheld from Maduro's government, but the company could avoid sanctions by recognizing Guaidó. Venezuela is heavily reliant on the US for its oil revenue - sending 41% of its oil exports there - while it remains in the top four crude oil suppliers to the US...The US action blocks all PDVSA property and interests subject to US jurisdiction, and prohibits US citizens from engaging in transactions with them. But Mnuchin said US-based subsidiary Citgo could continue operations if its earnings were deposited in a blocked account in the US.."
Ivan Briscoe, the International Crisis Group's program director for Latin America, thought Maduro could survive additional sanctions. He warned that the situation for Venezuelans would get worse should the US, China and Russia continue to treat the country as a "football in a bigger political game".