Capitalism works - for the capitalist 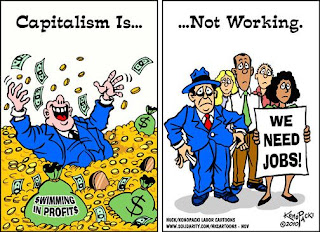 Bill Gates tweeted an infographic to his 46 million followers showing that the world has been apparently getting better and better. He tweeted, “A lot of people underestimate just how much life has improved over the past two centuries.”

The graph developed by Max Roser of Our World in Data appears to show that the proportion of people living in poverty has declined from 94% in 1820 to only 10% today.

First of all, real data on poverty has only been collected since 1981. Anything before that is extremely sketchy, and to go back as far as 1820 is meaningless. Roser draws on a dataset that was never intended to describe poverty, but rather inequality in the distribution of world GDP – and that for only a limited range of countries. There is no actual research to bolster the claims about long-term poverty.

What Roser’s numbers actually reveal is that the world went from a situation where most of humanity had no need of money at all to one where today most of humanity struggles to survive on extremely small amounts of money. The graph casts this as a decline in poverty, but in reality what was going on was a process of dispossession that bulldozed people into the capitalist labour system, during the enclosure movements in Europe and the colonisation of the global south.


Prior to colonisation, most people lived in subsistence economies where they enjoyed access to abundant commons – land, water, forests, livestock and robust systems of sharing and reciprocity. They had little if any money, but then they didn’t need it in order to live well – so it makes little sense to claim that they were poor. This way of life was violently destroyed by colonisers who forced people off the land and into European-owned mines, factories and plantations, where they were paid paltry wages for work they never wanted to do in the first place. In other words, Roser’s graph illustrates a story of coerced proletarianisation. Gates’s favourite infographic takes the violence of colonisation and repackages it as a happy story of progress.
But that’s not all that’s wrong.
The trend that the graph depicts is based on a poverty line of $1.90 (£1.44) per day, which is the equivalent of what $1.90 could buy in the US in 2011. It’s obscenely low by any standard, and we now have piles of evidence that people living just above this line have terrible levels of malnutrition and mortality. Earning $2 per day doesn’t mean that you’re somehow suddenly free of extreme poverty. Scholars have been calling for a more reasonable poverty line for many years. Most agree that people need a minimum of about $7.40 per day to achieve basic nutrition and normal human life expectancy, plus a half-decent chance of seeing their kids survive their fifth birthday. And many scholars, including Harvard economist Lant Pritchett, insist that the poverty line should be set even higher, at $10 to $15 per day.
So what happens if we measure global poverty at the low end of this more realistic spectrum – $7.40 per day, to be extra conservative? Well, we see that the number of people living under this line has increased dramatically since measurements began in 1981, reaching some 4.2 billion people today. Suddenly the happy Davos narrative melts away.
Moreover, the few gains that have been made have virtually all happened in one place: China. It is disingenuous, then, for the likes of Gates and Pinker to claim these gains as victories for Washington-consensus neoliberalism. Take China out of the equation, and the numbers look even worse. Over the four decades since 1981, not only has the number of people in poverty gone up, the proportion of people in poverty has remained stagnant at about 60%. It would be difficult to overstate the suffering that these numbers represent.
This  ringing indictment of our global economic system, is it is failing the vast majority of humanity. The world is richer than ever before, but virtually all of it is being captured by a small elite. Only 5% of all new income from global growth trickles down to the poorest 60% and yet they are the people who produce most of the food and goods that the world consumes, toiling away in those factories, plantations and mines to which they were condemned 200 years ago.
But the billionaire class at Davos will justify it.
Taken from here
https://www.theguardian.com/commentisfree/2019/jan/29/bill-gates-davos-global-poverty-infographic-neoliberal