Venezuela and its "socialism"

The humanitarian crisis in Venezuela is also very serious, with hunger, dire shortages of medicines, and a massive refugee exodus out of the country. Political and international events appear to be heading toward a catastrophe.


“How did Venezuela find itself in the mess it’s in today?” former Tory Cabinet minister Priti Patel asked. "One word: socialism."
And who can be blamed for associating the Venezuelan Maduro regime with socialism when a host of left-wingers from Corbyn to Bernie Sanders sang the praises of Chavez and his “21st Century Socialism” and the “Bolivarian Revolution.”
The problem is that the left wingers never learn their lesson, they always repeat the same mistakes over and over again, and workers spend their whole life oscillating like a pendulum from left to right and right to left, which are two wings of the same birds, or two eggs from the same nest, the same dog wearing a different collar. What is the difference between right wing and left-wing? In essence, both are wings of the capitalist system, and there is not any relationship between Leftism and socialism, and socialism cannot be established within the frame of a capitalist society, and it cannot be established by a  charismatic leader, no matter how well-meaning his intentions are.
While Leftists suffer from is historical amnesia. Since the very beginning of the so-called Bolivarian revolution and Hugo Chavez emerged on the political scene, the Socialist Party has been consistent in its analyses. It explained that it was just another reformist movement, and that Hugo Chavez was only a reformist nationalist. Contrary claims made by Leftists, from the very outset of his populist rule Chavez has pursued a mostly heterodox political "revolution". While at times the government has allowed for so-called "participatory democracy", such measures have more often than not been cancelled out by centralising tendencies at the top and the perils of charismatic leadership. Chavez has only gone so far with his "Bolivarian Revolution. In his own words Chavez explained that:


"I don’t believe in the dogmatic postulates of Marxist revolution. I don’t accept that we are living in a period of proletarian revolutions. All that must be revised. Reality is telling us that every day. Are we aiming in Venezuela today for the abolition of private property or a classless society? I don’t think so. But if I’m told that because of that reality you can’t do anything to help the poor, the people who have made this country rich through their labour – and never forget that some of it was slave labour – then I say: ‘We part company.’ I will never accept that there can be no redistribution of wealth in society. Our upper classes don’t even like paying taxes. That’s one reason they hate me. We said: ‘You must pay your taxes.’ I believe it’s better to die in battle, rather than hold aloft a very revolutionary and very pure banner, and do nothing…That position often strikes me as very convenient, a good excuse…Try and make your revolution, go into combat, advance a little, even if it’s only a millimetre, in the right direction, instead of dreaming about utopias."
What happens if a radical leader comes to power before the rest of the world is ready for socialism? Engels answer, in his history of the German Peasant Wars, was that he would be "irrevocably lost" and that has certainly been the case in every instance since.


In Venezuela the natural resources have never belonged to the workers. The State does not represent the peoples and the peoples do not own the state. It is like in the legal system where they use the expression "the Peoples vs somebody".  Chavez cannot be called a socialist in the proper sense of the term. He was a populist (and he was indeed popular) nationalist leader who tried to improve the lot of the poor but circumstances meant that he could not go beyond state-capitalism and social reforms. Yes, Venezuelan workers gained some benefits from Chavez. His time in power saw an improvement for some of Venezuela's poor, even if the right claim it was all squandered petro-dollars.


One such critic wrote: "Chavez invested Venezuela's oil wealth into social programs including state-run food markets, cash benefits for poor families, free health clinics and education programs. But those gains were meager compared with the spectacular construction projects that oil riches spurred in glittering Middle Eastern cities, including the world's tallest building in Dubai and plans for branches of the Louvre and Guggenheim museums in Abu Dhabi."
That's right. Chavez would have been better investing oil revenue in skyscrapers and museums rather than schools and hospitals for the poor!


Chavez represented a new form of capitalism promoting participation from below but faced with a hostile capitalist world.  While under the Chavez government, the Venezuelan workers movement has flourished with a level of democracy in workplaces rarely seen elsewhere.  Few politicians have been more successful than Chavez in ameliorating the conditions of the poor. One thing we know is, though, he wasn't building socialism, just state-directed capitalism. He did not cease to preside over an exploitative capitalist economy, nor did he cut off economic relationships with the West.


Without the charisma of Chavez, Maduro has failed to maintain the impact of the palliative policies which were financed by oil revenue. Maduro has not learned from the failed coup against Chavez is the legitimacy endowed by the power of elections and that the ballot box is stronger than the gun. Chavez put himself and his policies to the vote on no less than a dozen occasions. But what has happened to all the gains received by the workers? They have been lost by Maduro. Maduro hopes to keep power, yet is clearly incapable of solving Venezuela's economic crisis. He has lost the confidence of the overwhelming majority of the population. For at least the present, he holds the backing of the military.The US appears to be aiming for regime change and tightening sanctions to bring Maduro to his knees. Such an outcome is perhaps feasible, though it would leave a very bitter legacy. More likely, though, it would occasion further violence and an escalation of the economic crisis, possibly leading to civil war.


Nothing will change until working people everywhere, have ceased to put their faith in governments and charismatic politicians whatever claims and promises they make.  The degree to which the Venezuelan workers are exploited will continue to depend on fluctuations in the economy, on their own capacity and will to resist the inevitable downward pressure on their incomes, and on government policy. The fact of their exploitation, though, is inevitable. So is their relative poverty, their limited freedom of choice, and the lack of control they have over their lives. 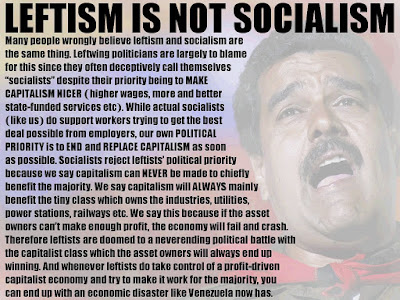 This is an interesting article for it's reiteration of the Party's theoretically based critique of the many false flags which proclaim socialism and which are not - although as pointed out in the piece Chavez was not one who made such false claims. The more difficult question is the operational one of how to bring socialism about in the sense of mass consciousness and mass mobilisation of the working class and then devise the structures of society that will facilitate and sustain it. The Party's summer school this year is on the theme: 'What it means to be a socialist.' This seems to me to have a lot of potential strands to it, including whether it is credible for individuals to assert that they are socialists in a capitalist society. I'll send the piece to the organiser, Mike Foster, in case he doesn't look at this blog.