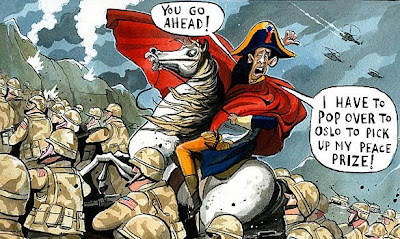 Barack Obama accepted his Nobel Peace Prize. Obama said there were times when "the use of force was not only necessary but morally justified," He went on to say "Instruments of war do have a role to play in preserving the peace".

No matter what the real or alleged atrocities of the "bad" side however, wars are quarrels over control of territory and resources between different sections of the capitalist class—business rivalry by other means. The working class can have no interest in such matters. The result of a "just" war is the same as a "bad" war — we suffer the consequences. The only "worthwhile" war is the class war—the fight against war.

Although we are not pacifists (we would countenance fighting should a pro-capitalist minority take up arms to try to prevent the democratic establishment of socialism) we say there is no such thing as a "just war". Wars are fought over markets, investment outlets, raw material sources and trade routes and strategic points to control them.

"A non-violent movement could not have halted Hitler's armies," Obama added.
Many point to the Second War, and declaim loudly that it was a just war, where the actions of the Allies were intended to stop atrocities.The 1939-45 war for example was apparently a war against fascism (despite the existence of neutral Spanish and Portuguese fascisms), and for democracy (despite totalitarian Russia being on "our" side). Because they're the "bad guys" the Germans in the 1939-45 war deserved everything they got. So it's okay to roast folk alive in air raids if they're on the "wrong side".The ethics of "legitimate" or "just" war have no bottom line. If there ever was such a bottom line, the saturation bombing of Hamburg, Dresden and Tokyo, generating the new military tactic of fire-storms, certainly plummeted below it.

He said the US "must remain a standard bearer in the conduct of war" to differentiate it from "a vicious adversary that abides by no rules".
Hoping that war can be carried out in a gentlemanly way, that it can be carried out without inflicting suffering on the working class is pie in the sky.

Faced with capitalist barbarity and cynicism SOYMB place on record our abhorrence of all war and call upon workers everywhere to unite to bring the war-prone capitalist system to a speedy end.

It is the inaction and complacency of the working class that enables such horrendous injustices to go on. For over a century the SPGB have warned of the dangers of political apathy, of trusting in leaders, of accepting all that governments say without question. Our inaction is an important element in our continuing exploitation, for the master class see in it our consent for their excesses.
Posted by ajohnstone at 4:13 pm

A well-argued article, and refreshing in its intellectual honesty. Not only is capitalism caused by war, but war is the systematic exercise of capitalism. Of course, there will always be conflict in society, but war is the industrial use of human beings in violence for the achievement of economic ends. This is wrong. The real 'war heroes' are those who stand against it - but mere protest within the system is not enough. A rational case against capitalism itself is needed, and is offered here.