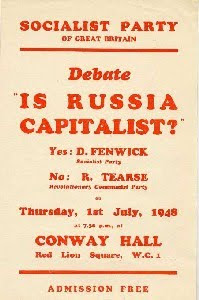 With Russia now fully and openly integrated within the world capitalist system , this post of a past debate with a now defunct Trotskyist organisation appears to be a rather sterile exercise . But yet today there are those on the Left who claim that what once existed in Russia was a Workers State , and for all its various flaws , such a society should still be strived for as a progressive step towards socialism . Therefore , the arguments against such a view must continue and although our understanding of what developed in Russia has grown since the debate took place , SOYMB is happy to make it available to the worldwide web .
Debate with Trotskyists:
"Is Russia Capitalist?"

On July 1st [1948] at Conway Hall , D. Fenwick for the S.P.G.B. debated with R. Tearse for the Revolutionary Communist Party.
In his opening half-hour FENWICK carefully defined Capitalism and Socialism in the usual Marxian terms and argued that the existence in Russia of a propertyless working class living by selling its labour-power for wages, and producing commodities for sale on the market shows that it is not Socialism but a form of State Capitalism. Admittedly , it had not developed exactly on the lines of capitalism in the Western countries. Trotsky in "The Revolution Betrayed" had asserted that the term "State Capitalism" is meaningless, but certainly Lenin did not think so for in his "The Chief Task of Our Times" he had argued that State Capitalism would be a step forward for industrially backward Russia. The contrasts of riches and poverty in Russia and the growth of bondholding are features of Capitalism not Socialism. What is the interest paid to the bondholders if not surplus value resulting from the exploitation of the workers? Fenwick emphasised that the achievement of Socialism presupposes a socialist working class, it cannot be imposed by a dictatorship.

R. TEARSE in reply claimed that the S.P.G.B. is wrong in describing the 1917 revolution as a bourgeois revolution. It would be a peculiar capitalist revolution that expropriates the capitalists. The S.P.G.B. idea of all the workers moving together towards Socialism is wishful thinking, and the notion of Capitalism and Socialism being divided by a sort of Chinese Wall is erroneous. In the introduction to "Civil War in France" Engels had conceived of a whole new generation after the working class seizure of power before it would be possible to have fully-fledged Socialism. The R.C.P. never claimed that Socialism exists in Russia. Marx and Engels, in the Communist Manifesto, when they wrote of revolutionary measures such as steeply-graduated income tax, and the centralisation of credit in the hands of the State, obviously envisaged the continuance of the wages system and commodity production in the transition period after the workers had gained power. The first essential step for the workers is to secure the centralisation of large-scale industry in the hands of the State as had been done in Russia. Inequality exists but this does not prove the existence of Capitalism. The rich in Russia are the artists and writers but in the S.P.G.B. pamphlet "Socialism" it is claimed that these better-paid workers are still members of the working class. Bondholding is a very small feature in relation to the whole economy. The bondholder does not control undertakings. The bureaucracy may receive parasitic income from the exploitation of the working class but accumulation of capital through the individual capitalist and the resulting capitalist crises of boom and slump do not exist in Russia. What social group constitutes the capitalist class in Russia? He challenged Fenwick to answer. As regards the R.C.P.'s willingness to support Russia in war, this is justified because there you have a progressive economy based on the nationalisation of the whole economy.

In further contributions to the debate FENWICK referred to Marx's statement of the possibility of the workers overthrowing the bourgeoisie and of this merely serving the development of the bourgeois revolution itself as happened in France in 1794 (quoted in "State and Socialist Revolution" by Martov). He also quoted from "Socialism, Utopian, and Scientific" where Engels showed that the nationalisation of industries does not lessen their capitalist nature. Russia was in fact affected by the 1931 crisis like other countries. He referred to the change in the law which allows holders of State bonds in Russia to bequeath them to their heirs and quoted Trotsky's statement in "Revolution Betrayed" that if any such development occurred it would be a victory for the bureaucracy and would mean their conversion into a new ruling class. The measures at the end of Section II of the Communist Manifesto, showed that at that time the immediate establishment of Socialism after the capture of power was not entertained by Marx or Engels; but industry and knowledge had undergone great development since then. In 1872 Engels had said that the passage in question would have been very differently worded under the different conditions existing at the later date.

R. TEARSE repeated his argument that wholesale nationalisation is different in kind from the nationalisation of sectors of industry as in this country. In Russia nationalisation would form the basis of Socialism after the transition period. The 1931 crisis did not affect Russia in the fundamental way it affected other countries. It was not the result of the accumulation of capital in the hands of private capitalists. As regards the quotation from "Socialism, Utopian and Scientific" about the capitalist, nature of nationalised industries it should not be overlooked that in the very next sentence Engels argued that though the capitalist relation is not done away with, it is " brought to a head, it topples over." In Russia industry as a whole has been taken over by the State and the anarchy of private appropriation of surplus value does not exist. The defeat of Russia in war would be a defeat for the working class and a further lease of life for capitalism. There must be a transition period between capitalism and socialism and during this period capital and wages would exist but this alone does not make it capitalism. Though in 1872 Engels had said he and Marx would not in the changed conditions lay special stress on the measures proposed in the Communist Manifesto Engels never said the measures were wrong and he continued to call them revolutionary measures.

The debate was well-attended and the audience showed the closest attention to the by no means simple clash of argument. A collection of £10 15s. was taken up.
(Socialist Standard, August 1948).
Hat-tip to Inveresk St Ingrate for image and more background info at link
Posted by ajohnstone at 2:35 pm

Link added at the impossibilism index page on the Bataille socialiste website.