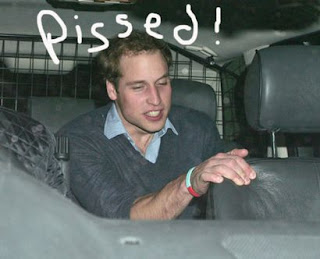 Prince William has spent a night sleeping rough in an event organised by a charity for the homeless.William slept in a sleeping bag near Blackfriars Bridge in central London last week, as part of his role as a patron of the Centrepoint organisation.

Prince William said the experience had deepened his understanding of homelessness. "Poverty, mental illness, drug and alcohol dependency and family breakdown cause people to become and then stay homeless," he said."Centrepoint's work - along with many other organisations' - in tackling these fundamental causes is desperately important if we are ever to end homelessness in this country."

SOYMB would have been more impressed if he could have identified the fundamental cause of those social problems as stemming from the nature of the economic system we live in - capitalism . But as the figurehead of our class divided society ,SOYMB does not expect the Prince to bite the hand that feeds him .
Posted by ajohnstone at 5:30 pm

Couldn't we put the homeless up in Buckingham Palace? According to a report in 1992 it has 52 principal bedrooms, 188 staff bedrooms, 92 offices, and 78 bathrooms.