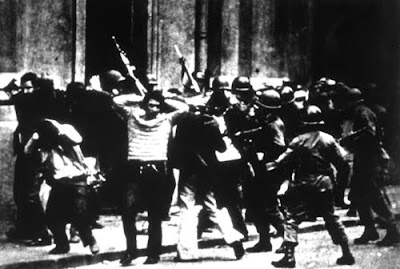 The events in Chile are already a myth. There, according to left and right-wing commentators alike, a democratically-elected Marxist government was overthrown by the armed forces, so proving the impossibility of establishing Socialism peacefully by using the existing machinery of limited political democracy.

Let us try to scotch this myth now by showing that the failure of the so-called Chilean experiment has absolutely no relevance to the question of whether or not Socialism can be established peacefully and democratically.

Allende and his Popular Unity were not Marxists and were not trying to establish Socialism. The programme of the Popular Unity, an alliance whose main elements were the so-called Socialist Party and the so-called Communist Party, was essentially one of state capitalism for Chile. It called for the break-up the big landed estates, for the nationalisation of foreign-owned and some Chilean-owned industry, and for various social reforms. Even if implemented in full this programme would have left the basic position of the working class in Chile unchanged: they would have remained propertyless wage-workers forced to sell their mental and physical energies to an employer (even if the State) in order to live; production would have remained geared to the market; and the government would still, under pressure from the world market, have had to restrict the consumption of the working class in order to allow the maximum amount of surplus value to be extracted for re-investment.

Secondly, not only was the Allende government not trying to establish Socialism, but it did not even have majority support for its programme of state capitalism. Allende was elected President in September 1970 in a three-way contest, but with only 36 per cent of the vote. Subsequent elections showed that his government never did manage to acquire majority support. The last elections in March this year still gave its opponents 55 per cent of the vote.

Thirdly, because of this limited electoral support, the Popular Unity did not completely control the State machine. Parliament remained in the hands of its opponents who, although they did not have the two-thirds majority needed to impeach Allende himself, harassed his Ministers and delayed and altered ills proposed laws.

For three years those whose vested interests were threatened by the coming of state capitalism to Chile—the American corporations, the Chilean landowners and big capitalists—sabotaged and plotted against the Allende government, but the fact remains that the conflict in Chile was between private capitalism and state capitalism, not between capitalism and Socialism.

That the limited democracy that existed in Chile has been a victim of this conflict can only be a matter of regret for Socialists. For, whatever its limitations, capitalist political democracy at least allows the working class to organise to defend its everyday interests and to discuss differing political views, including those of Socialists. Its suppression in Chile by a military junta represents, in this sense, a step backward for the working class of Chile — not that much of it would have survived had the Popular Unity's full state capitalist programme been implemented, if the experience of Cuba is anything to go by.

But it still remains true that, in the quite different political conditions (which have never yet existed) of an immense majority of workers in all the industrialized countries of the world being Socialists and organised to win and control political power, Socialism could be established peacefully. The overthrow of a minority state capitalist government in Chile by forces acting on behalf of private capitalist groups will not deflect us from this position into urging the working class to adopt the futile and dangerous policy of armed insurrection.