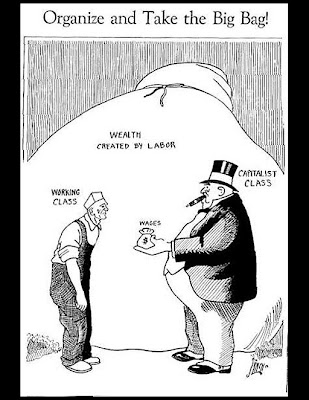 Apple head Steve Jobs received his customary $1 annual salary in 2009.But don't fret , Jobs' stake in Disney - of 7.4% - is currently worth about $4.5bn. His 5.5 million shares of Apple's stock is worth about $1.1bn as Apple's share price rocketed this year.

The heads of US mortgage giants Fannie Mae and Freddie Mac may each receive pay packages of up to $6m (£3.7m) for 2009.

Meanwhile back in the UK

Scotland's children's commissioner warned key goal of halving child poverty in 2010, ahead of eradicating the problem altogether by 2020 would not be achieved.
And reported here pupils from the poorest 10% of homes are more than five times as likely to be persistent absentees – meaning they miss a fifth or more of the school timetable – than their classmates from the wealthiest 10% of homes, the Tories' analysis of the government's latest truancy statistics shows.

More than seven million households struggle to pay their fuel bills, almost double the official estimate, according to new research published . In a separate analysis , the Conservative Party claims that 2.4m pensioner households – one in three – are in fuel poverty .

David Orr, chief executive of the National Housing Federation, an umbrella group for housing charities, said:
"...Huge numbers of vulnerable people will go cold this winter because they can't afford to heat their homes. The spiralling cost of energy and the impact of the downturn mean heating our homes has become a luxury rather than a basic necessity – particularly for the elderly, low paid and unemployed."

Also reported in The Independent discrimination against disabled people is increasing in the workplace as employers target them for redundancy and unfairly turn them down for new jobs. The employment gap between disabled and able-bodied employees is growing as more people compete for fewer jobs during the recession.
The study also warned that the job prospects and standard of living of disabled people could worsen even further as public service are cut.Disabled workers are more likely to work in public administration, health or education than the working population as a whole meaning that public spending cuts could have a disproportionate effect on disabled workers.
The report's authors concluded: "Not only are disabled people more likely to be out of work, and experience a higher incidence of in-work poverty, they face additional financial costs arising as a result of an impairment. They are also less likely to have savings and are therefore at greater risk of immediate poverty during an economic downturn..."

Office for National Statistics figures show that the richest fifth have nearly two thirds of the wealth. More startling is that the poorer half of us speak for just 9p in every £1 of privately held wealth.The report reveals many consumers' reliance on debt to fund their day-to-day living costs. More than a third of respondents said they had never saved, while three-quarters of households had unsecured credit facilities, such as a credit card or store card, and 48% had unsecured debt, owing an average of £2,700 each.15% of households that owed money on one or more credit or store cards admitted they had been unable to meet their minimum repayments, and 10% of households were in arrears on at least one financial commitment.

SOYMB wishes you festive greetings
Posted by ajohnstone at 4:55 am

Comrade, would it be possible to give us some background on the situation in Nepal.Its all very confusing.