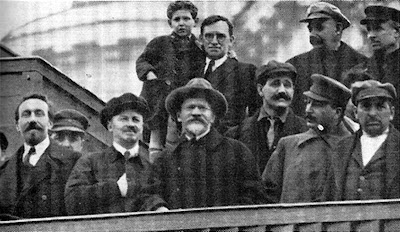 JT Murphy back row with child
Over the decades the Socialist Party has witnessed and commented upon the acrobatics of other alleged socialist parties . The Communist Party with its political somersaults from ever-changing Moscow instructions offered a treasure trove of material for the writers of the Socialist Standard to expose the hollowness of the Communist Party's claim to be the workers party .

Another Communist Leader Walks the Plank

The expulsion of Mr. J. T. Murphy from the Communist Party shows up once more the conflicts between the leaders of that organisation for the control of its confused rank and file. The issue giving rise to the expulsion was no question of Socialist principle or working-class interest. Theoretically it was a conflict of slogans. The Politbureau called upon the workers to "Stop the transport of munitions" ; Mr. Murphy preferred to demand "Credits for the Soviet Union!" Rather slender ground for a charge of heresy, one would imagine; but there is probably more in the matter than meets the eye.

As is usual in the Communist Party, the expulsion was carried out dictatorially. The Politbureau expelled Mr. Murphy in answer to his resignation, and informed the membership afterwards. The Communist Party, unlike the S.P.G.B., provides no opportunity for a member to defend himself against a charge before a branch meeting, delegate meeting or Annual Conference. We have, therefore, no means of testing the amount of support Mr. Murphy had among the members of the Party. It is, however, interesting to notice that the fusilade of condemnation of Mr. Murphy in the columns of the Daily Worker contains at least one significant admission. The Working Bureau of the London District Party Committee, "endorsing the decision of the Politbureau," drew that body's attention to the "weakness revealed in our ranks by the fact that nowhere within the Party did any comrades appear to recognise Murphy's wrong line or query his article" (Daily Worker, May 19th).

Mr. Murphy's slogan could, of course, be adopted by any capitalist wishing to export goods to Russia. Most Liberals and some Conservatives are in favour of such procedure. At the same time, the slogan officially favoured is of the sort likely to appeal to the sentimental anarchists and general strike fanatics, who fondly hug the delusion that the operations of Governments enjoying the political support of the major portion of the workers can be seriously hampered by attempts at minority mass action. The workers and unemployed (unable, as they are, in their present state of disorganisation, to defend their wages and insurance benefits against "economy" cuts) are expected to rise in defence of the Russian Government! Could folly go further?

Mr. Murphy's lukewarmness is not altogether a mystery. He has for many years been associated with an important munition producing area (i.e., Eastern Sheffield), and working-class electors of Brightside, whose votes he solicited at the last General Election, not being Socialist, can hardly be expected to display enthusiasm over a proposal to curtail their chance of getting or holding a job. They may want capitalism to be administered more favourably to themselves, but there is the rub—they want capitalism! And no one knows that better than Mr. Murphy. From his point of view, full-time production of munitions or anything else for the defence of the Soviet Union, or for the defence of China from Japanese imperialism, or any other old "ism" would therefore be a much more attractive election cry.

That he is concerned with "Work or Maintenance" by the capitalists, and not with emancipation from capitalist domination, is made clear by his election address of October, last year. Boasting of the "magnificent demonstration" of the unemployed to the Labour Council on the 7th of that month, in which he played a leading part, lie said this "clearly shows the way in which the workers can move forward. Already we have gained concessions against the economy cuts. Mass action and again mass action will defeat the economy proposals of the National Government and the Labour Party."

The "concessions" he mentioned consisted of the promises by the representatives of the Council which the leaders of the deputation allege that they received and upon the supposed strength of which they led the demonstrators peacefully home again. It is worth noting, too, that less than five minutes before Mrs. Moule (a leader of the deputation) announced the obtaining of the promises, Mr. Murphy had been emphasising from, the platform that the Council, dominated by the Labour Party, had broken every promise they had ever made. It is not surprising, therefore, that this same Mr. Murphy, who was prepared to treat a promise as a concession in his election address, should soon find it necessary to publish an "exposure" of the local Labour leaders for failing to keep their promises. In a pamphlet entitled "Handrags of Law and Order," issued a month or so ago, Mr. Murphy registers a feeble complaint about the " hypocrisy " of the Labour chairman of the local Public Assistance Committee and others administering the Means Test. Mass action had ignominiously failed to relieve in the slightest degree, the intensified poverty the unemployed. Mr. Murphy's pamphlet therefore was not merely an exposure of the Labour leaders ; it was equally an exposure of one of the policies of the Communist Party.

If Mr. Murphy has, therefore, been expelled, it is not because he has failed to do his share in misleading working-class dupes. He has not deviated from any clearly defined policy. Opportunist to the core, the Party has adopted various contradictory policies. Under such conditions nothing is easier than for a group of leaders to turn the Party machine against another leader less popular. Intrigue thrives where dictators exploit the politically inexperienced. That is the general lesson of Communist expulsions.

Mr. Murphy, who was expelled in spite of his willingness to sign a retraction drawn up by himself, but not satisfactory to the Party leaders, is now denounced by them in extravagant terms as a deserter from Communist principles. He joins a large body of former Communist leaders who were once given servile hero worship and. are now treated as enemies and outcasts. It is not that Mr. Murphy has changed, but only that a new clique are in control. because they have gained favour in Moscow.

The writer 'EB' was Eric Boden. Just thought I'd mention that for the political anoraks out there.

PS - Just remembered reading somewhere that Boden represented the SPGB in a debate with Murphy - when the latter was still a member of the CPGB - that took place in Sheffield in 1930.