Copping out at Copenhagen 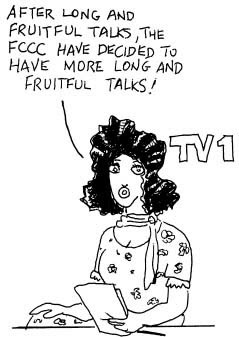 56 newspapers around the world in 20 languages published the same editorial calling on the representatives of the 192 countries gathered in Copenhagen to take decisive steps in tackling climate change yet it admits few believe that Copenhagen can any longer produce a full treaty , that may have to wait until June 2010 UN summit in Bonn . SOYMB remembers Rio and Framework Convention on Climate Change summit in 1992. The FCCC aimed to return greenhouse gas emissions to 1990 levels by the year 2000. It was signed by 166 nations. SOYMB remembers the the follow up Earth Summits in New York in 1997 and Johannesburg 2002. SOYMB remembers 1997 Kyoto Conference on Climatic Change with 10,000 attending from 160 countries and who agreed to reduce global greenhouse gas emissions by 5.2 percent over the next 15 years. Like all true apologists for capitalism, those participating in all those meetings continue to fail to locate global problems in a wider social and economic context, in capitalism itself, as if the profit motive was incidental to environmental concerns. Profit is in fact the biggest stumbling block encountered by delegates at Earth summits and the World Socialist Movement has wasted no time in exposing similar summits in the past as the farces they are.

In spite of all the evidence that present production and transport methods and deforestation are primary responsible for climatic warming-the disappearing polar icecaps, global flooding, rising sea levels, vegetation dieback, the loss of thousands of species of life, and that the speed and scale of global warming has no precedent - the world's governments still insist these wasteful, though profit-generating methods must remain. And this in spite of recent evidence from the hundreds of scientists. Attempts to halt the massive output of greenhouse gases in the hope of preventing a possible global warming have resulted in negligible success, mainly due to capitalism's higher priority—profit.
The issue of climate change is just one of a vast range of problems which capitalism is hopelessly ill-equipped to deal with. Human and environmental needs come a poor second whenever the needs of capital dictate. The history of sincere but failed attempts to correct a system which cannot meet needs leads to the conclusion that a new social system should be tried. A system without money and the profit motive in which the interests and needs of all are paramount. In such a system the challenge of the human impact on the environment can be seriously addressed for the first time. People, and not money, will control their lives and the direction of social progress.

Regardless of the well-meaning words we can not expect obligations to be met so long as there are profits to be made. The perennial problem is that countries are reluctant to promote the investment in more environmentally friendly methods of production and transport because their respective governments, being the executive arm of the capitalist class, prefer to bow with suppliant knee to powerful oil, coal, iron and steel lobbies, rather than openly acknowledge that ecologically we risk approaching the point of no return. Instead of governments vying with each other to reduce carbon emissions, they have sought to win advantages for their own industries . We live in a homogenised, corporate world, run entirely on capitalist principles. Simply put, everything has to turn a profit at each stage of the line, otherwise it is worthless, expendable. Raw materials, service, investment, packaging, transportation, advertising, marketing, point of sale, with labour at every step, all need their profit in order for a transaction to be viable. Climate change deniers and sceptics are hired by industry, foundations and government think tanks in order to denounce or reduce the impact of scientific reports of global warming. Corporations have no interest in nil returns, only in repeat business. And loyalty is as long-lived as profit, corporate allegiance to which will trump allegiance to any flag.

In fact, what are the chances of any world agreement to reduce carbon emissions being achieved? Clearly, climate change is a world problem and as such can only be tackled at world level. But, as the experience of the Kyoto Treaty of 1997 shows, the chances of the world’s major capitalist states agreeing on an adequate and effectively enforced programme are practically nil.

The consequences of climate change – changing agricultural productivity in different parts of the world, population migrations, a rise in sea level – can only be dealt with by planned and coordinated global action within the framework of a united world. Only in a frontierless world in which the Earth’s natural and industrial resources have become the common heritage of all humanity can the necessary measures be taken to stabilise carbon emissions and to deal with the consequences of global warming. People, collectively, have the power to bring about that demise of capitalism . It will be the people, who, by sheer weight of numbers, will end the tyranny that is being waged now by international capitalism on our habitat and our planet . People everywhere are shouting “Enough!” and are beginning to realise that our loyalty is to each other and to the maintenance of a protected, sustainable world environment, not just for now, but for all future generations.

Otherwise , in the words of Dads Army Private Fraser, we are all doomed , doooomed – unless, that is, we establish world socialism.

Posted by ajohnstone at 5:01 am