Save the Child Refugees 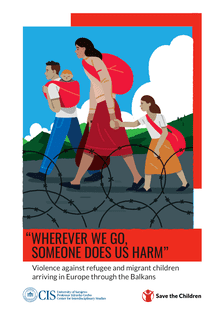 Children make up about one-third of all refugees and migrants arriving in Europe. A significant percentage of these children fleeing conflicts and insecurities in the countries of South, Central and Western Asia, come through Balkans route, which is part of the Eastern Mediterranean route towards Western and Northern Europe.

The countries on the Balkans route, including Greece, Bulgaria, and Croatia, which are members of the EU, are mainly seen as transit countries by refugees and migrants, as they try to continue their way towards the more developed countries of Western Europe.

An in-depth analysis by Save the Children reveals:

·According to children’s testimonies, police at the borders are the most common perpetrators, as well as smugglers they rely on to cross borders

·Children report smugglers sometimes kill or leave children and adults in conditions they would not be able to survive on their own, and the dead bodies then remain to be seen by other children travelling on the same route

·Inadequate and often inhumane reception conditions in prison-like camps exacerbate the suffering of children, and the lack of adequate mental health support increases the risk of harm.

The report reveals a critical lack of protection for child migrants across Europe, with children reporting violence is now an integral and an almost inevitable part of their migration experience. About one in three of the children now believe that no one can help them on their journey, and some believe they are no longer able to help themselves.

The report reveals child migrants are at enormous risk of sexual violence, with boys travelling alone particularly vulnerable, and that children are being exploited at work during the journey and at their destination, including being recruited by smugglers for criminal and sex work. Almost two-thirds of children interviewed listed one or more incidents where they recognised or witnessed sexual abuse of a child.

Those who were travelling unaccompanied, gave examples of self-harm, suicide attempts, and abuse of alcohol and other drugs as passive strategies for coping with stress and difficulty. Some children sought protection by becoming involved in criminal and sexual activities with smugglers and other adults.

“These findings are striking because they show the violence in these children’s lives is so present it has become normalized. Children are exposed to all types of violence, at all times - in their countries of origin, along the journey, in the countries of transit. A migration experience that includes multiple, prolonged exposure to violence may have incomprehensible harmful effects on the development of children."

“The lack of protection at European borders has terrible consequences for children. Europe's overwhelming emphasis on deterring arrivals means children are subjected to shocking violence by police and border guards; violence which is carried out with impunity.

"Wherever we go, Someone does us Harm": Violence against refugee and migrant children arriving in Europe through the Balkans - World | ReliefWeb