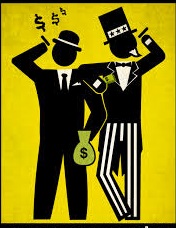 The nation’s median households pocketed 2.3 percent fewer real dollars in 2018 than they earned in 2000.

America’s most affluent households have no such problem. Real incomes for the nation’s top 5 percent of earners have increased 13 percent since 2000, to an average $416,520.


The new Census numbers don’t tell us how much our top 1 percent is pulling down. But IRS tax return data shows that top 1 percenters are now pulling down over 20 percent of all household income — essentially triple their share from a half-century ago.


Among Americans in the poorest 20 percent of this age group, under half — 47.6 percent — were still waking up every morning in 2014. In other words, the poorest of the Americans the GAO studied had just a 50-50 chance of living into 2014. The most affluent had a three-in-four chance.

“The inequality of life expectancy,” as economist Gabriel Zucman puts it, “is exploding in the U.S.”