It now looks fairly certain that a general election will take place on the 12th of December.

Once more the propertied class are calling upon the workers of this country to return to power a government pledged to maintain the private ownership and control of the means of life and the social system based on capitalism. The only solution for the problems of the working class is socialism. It is our task to expose the evil effects of capitalism. Will BREXIT do anything to solve the problems people in this country are suffering from – job insecurity, inequality, poverty, crime, poor healthcare? Will Scottish or Welsh nationalism? The answer has to be ‘no’. And the reason is that these problems don’t come from particular constitutional arrangements. They come from the way society is organised – production for profit and ownership of the vast majority of the wealth by a tiny minority of people: the global system of capitalism. No matter how well-meaning politicians may be they can’t control that system – it controls them. The best any government can do is try to ride out its storms.

To sum up:
• If you’re fed up with the way so many people are forced to live – hanging on desperately to a job that gives little satisfaction and doing it just for the money
• If you are sick of seeing grinding poverty alongside obscene wealth


• If you are sick of the planet being abused by corporations who don’t care about the future or the environment. It was on the 12th December in 2015 that the climate change summit in Paris reaches a deal between 195 countries to limit the rise in the global average temperature to less than 2°C above pre-industrial levels


• If you think the root cause of most problems is the market system and the governments that maintain that system
. . . then you’re beginning to think like we are.

Ask any of the other political party candidates about a world without the capitalist system and they will cry in chorus, ‘no! it’s Utopian! not possible! not now! maybe in another hundred or so years! we need to work within the system! we can change and improve it from within!’ Capitalist politicians of all shades have been telling you for generations how their “practical” policies will solve your problems. They have been saying this since working people got the vote and, not surprisingly, this profit system still remains, with all the same problems it has always generated. We therefore have to laugh at them all with the derision they deserve and take steps to organise for a better future. Time and time again, experience of disappointment of their electoral pledges and promises has shown that the only practical solution is in the abolition of capitalism and the establishment of socialism.

A vote, even for a candidate of the Socialist Party, is of no value unless it expresses a socialist consciousness. Understanding must precede action, for socialism is impossible until the workers become class-conscious socialists. The new society is one without leaders just as it is one without owners and wage-slaves. It is a wholly democratic society, one which can only be achieved when you – and enough like-minded people – join together to bring it about peacefully and democratically. Do not vote for capitalist parties but join and work with us to end this system and help build of a new society.

As most likely there will be no Socialist Party candidate standing in your constituency go to the polling booth, nevertheless, and write “Socialism” across your ballot paper. It will at least indicate to our opponents that there is a revolutionary sentiment which will in time sweep away their rotten system with all its parasites and hangers-on. What have you to lose? 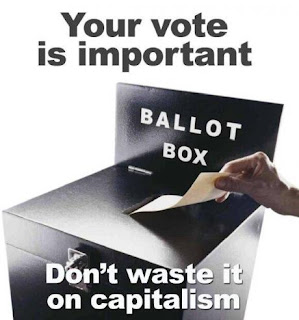 So you think it's a better outcome for those left leaning among the proletariat to abstain than to vote for a Labour party with a left leaning social democrat as leader? Wouldn't it be preferable to have Corbyn make a some advances, possibly PM, than have Johnson to gain or maintain. And I get the argument that parliamentary politics is a sham, but why would you not vote for a party with a leader who is alos calling it a rigged game?

It is nothing to boast about but the Socialist Party has been around for well over a hundred years now. We have witnessed many claims from the left and right. Our analysis is based on an understanding of the positions of the main parties, some of which have been far more right that Johnson and some far more radical than Corbyn and the promises they have made and failed to keep. Nothing in what Corbyn says gives us confidence that this time will be any different than before.

You are advocating voting for the lesser evil but failing to appreciate that the lesser is an evil also. Didn't such a tactical vote of keeping the Tories out bring us Tony Blair?