Around England there are plenty of Keep Out and No Trespassing signs. England is owned by a tiny number of people and organisations. Land is the bedrock of the economy: the food we eat, the homes we live in, the natural world that supports human civilisation.

“Land is by far the greatest of the monopolies,” Churchill observed, “… the land monopolist has only to sit and watch complacently his property multiplying in value, sometimes manifold, without either effort or contribution on his part; and that is justice!”

Only 5% of English land is owned by householders, while 18% due to the sell-off of ancestral lands to the “new money” of hedge-funders and oligarchs, is in the control of corporate structures and offshore companies, many of them opaque. 30% rests in the hands of the feudal Norman “cousinhood”, whose offspring have until recently preserved their birthright.

Oxford to Cambridge colleges with their 126,000 acres of land and property portfolios worth some £3.5bn, are among the largest institutional landowners. The colleges are corporate bodies with huge purchasing power. Oxford's St John’s has total property assets of £250m.

The Church Commissioners own some 105,000 acres of the country; the Duke of Northumberland owns at least 100,000 acres, nearly 10% of the county that gives him his title.

In France, you can pitch up at your local town hall and ask to see, free of charge, a map of who owns what in your neighbourhood. In England such a request carries a fee and is often frustrated by vague legal niceties around compulsory registration. For an individual to discover all that is known about land ownership in England would cost more than £72m. Around 15% of the freehold land in England & Wales is unregistered. What this means is that if you go to the Land Registry and ask them ‘Who owns this piece of land?’, they simply can’t tell you, for a huge chunk of the country.

Only 10% of land in England is open access, and that proportion shrinks to 1.5% in Berkshire.

A significant amount of land is off-limits MoD land but far more significant was the land held by corporate family structures, including the Yattendon estate, 9,000 acres owned by the Iliffe family, much of it planted to supply 80,000 Christmas trees annually; or the Englefield estate, 14,000 acres in the prime M4 corridor owned since the 18th century by the Benyon family.

Richard Benyon, current owner of Englefield (and in receipt of £278,180 taxpayer-funded farm subsidies), is the richest of the current crop of Conservative MPs with estimated wealth of £110m.

Another competitor for that title is Richard Grosvenor Plunkett-Enle-Erle Drax, who sits in the Commons for South Dorset. Drax who owns the 7,000-acre Charborough estate, originally established with profits from the sugar and slave trades. The estate is bounded by the longest wall in England, made up of 2m bricks; the public get to look beyond the wall for two days a year, when tea and cake is served to locals. In campaigning for Brexit, Richard Drax (as he judiciously calls himself) argued a strong anti-immigration line, stating: “I believe, as do many of my constituents, that this country is full.”

The impression that we are a small and overcrowded island, that property is scarce and worth a lifetime’s work and debt to come by, that a little patch of suburban garden should reasonably be the aspiration of any true-born Englishman, has long been advanced by politicians of different stripes and for different reasons. You can rest assured, however, that the nation does not look very crowded from the Palladian windows of Englefield House or from Drax’s mullioned pile at Purbeck.

Two-thirds of land in the UK as a whole – 40m acres – is owned by 0.36% of the population; 24m families, meanwhile, share the “urban plot” of 3m acres. The notion of the country being “full” is a political fantasy.

When once asked how young entrepreneurs might succeed in Britain, the late Duke of Westminster, Gerald Grosvenor (owner of 131,000 acres, including much of London’s Belgravia and central Liverpool), observed, drily, that they should “make sure they have an ancestor who was a very close friend of William the Conqueror”. The aristocratic Grosvenor Estate, besides owning 135,000 acres of farms and grouse moors, also has some of the hottest super-prime real estate in London. It’s no accident that Mayfair is the most expensive location on the Monopoly board: in real life, house prices there average out at a staggering £21,000 per square metre. The Grosvenors obtained Mayfair three centuries ago through an inherited dowry, when it was still fields; through a lucky roll of the dice, it’s now the basis of their £9bn fortune.

The wealthy owners of grouse moor estates received over £10million in public farm subsidies last year. 61 estates covering a vast 380,517 acres raked in £10,983,718 in taxpayer subsidies via the Common Agricultural Policy. grouse moor owners are effectively also the owners of the UK’s single largest carbon store – its peat bogs. Yet the slash-and-burn moorland management practices used by estates to maximise grouse breeding have been shown to dry out the carbon-rich peat, causing it to release large quantities of carbon dioxide into the air and worsening flooding downstream.

Pheasants are a non-native species in Britain, introduced for shooting; and though we tend to think of them as a harmless species, their numbers are now vast – a staggering 35 million are released in the UK every year (20 million of which are in England) simply to be shot by the rich. A recent study showed the biomass of introduced pheasants outweighed the biomass of all wild bird species in the UK. One postcode district, YO61 in North Yorks, contains over a million pheasants

The housing crisis is a land crisis. The laundered cash that has poured into London property, much of which lies empty, has been facilitated by a taxation system that largely ignores the productive and commercial value of land. 60,000 long-term empty properties are known to lie vacant across England and Wales. In the shires, there is a radical shortage of building plots and a critical housing problem, while legacy landowners are subsidised to exploit the estates granted to them when the country’s entire population was equal to that of present-day Greater Manchester.

The US, France and Germany have their property hotspots, yet most of the land remains relatively cheap and rents in most large cities can be still be affordable. In the UK, we are all paying out huge sums on rent and mortgages that could be used to pay tax on collective goods and services, or to buy those goods and services directly. In 2017, the total amount of rent paid by tenants in Britain soared to more than £50bn, more than double the level seen a decade ago. The total level of mortgage payments has changed little in that time, as the old pay off their loans and own homes outright, while the young take on bigger loans over longer periods to pay ever higher property prices. 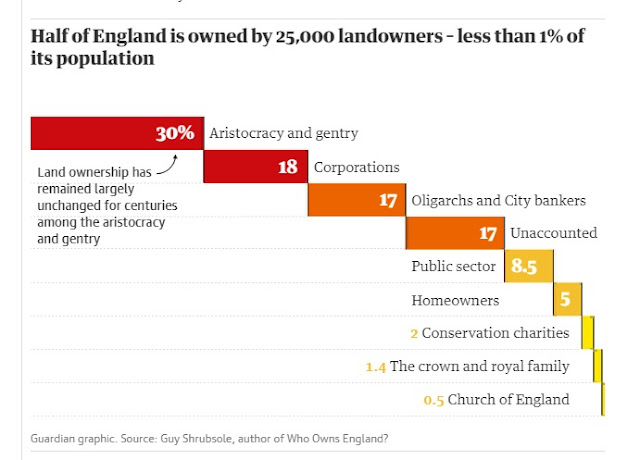