It is getting worse

Bad news just keeps coming. Again and again, studies provide increasing evidence that the planet is heading towards some sort of climate disaster.


In the last year alone, we have seen publication of the US National Climate Assessment’s Fourth National Climate report,  the UN Global Sustainable Development report (“The Future is Now”), the US National Oceanic and Atmospheric Administration report, the World Meteorological Association report on Accelerating Climate Change, the Intergovernmental Panel on Climate Change (IPCC) reports on Climate Change and Land and Ocean and Cryosphere, the Science Advisory Group to the UN Climate Action Summit’s report “United in Science,” to say nothing of countless articles in science journals warning that catastrophe lies ahead. As “United in Science” put it, current efforts need to be “roughly tripled to be aligned with the 2o C goal and increased fivefold to align with the 1.5o C goal” adopted by the 2016 Paris Agreement (emphasis added).”


We are confronted by the damage already resulting from climate change: more intense and frequent extreme weather events like hurricanes, floods, droughts, forest fires, and heat waves; rising sea levels that threaten the homes, lives and livelihoods of millions of people; and melting ice caps and permafrost, among others.

The consensus among science-based reports is that the path ahead is far worse: widespread food and water scarcity, increased exposure to diseases and allergic illnesses, economic decline, and damage to the “infrastructure, ecosystems, and social systems that provide essential benefits to communities.” The vast majority of greenhouse gas emissions are produced by the world’s developed capitalist economies, with China and the US leading the way.  By contrast, people in nations that have the least impact on climate change are most vulnerable to the worst of its effects.

Millions are participating in global protests. Extinction Rebellion has mobilized direct action and civil disobedience in cities from New York and Philadelphia to London, Paris, Berlin, Madrid, Amsterdam, Toronto and Sydney. Despite the demonstrations and the warnings from scientists the results so far has produced only modest pledges from a minority of nations. These steps remain woefully inadequate if the world is to avoid a cataclysmic outcome.

Why this relative inaction in the face of global catastrophe? Businesses under capitalism are is loathe to weaken their competitive position and countries are reluctant to cede commercial advantages to the other capitalist economies.  In a capitalist world, each economic unit must act to protect what it deems its own interests. Corporations and the wealthy shape government policy. Each public authority — local, state or national government — is constrained by the fear that pushing public interests too far will cause capital flight. This is the way capitalism works, which suggests how profound and systemic the changes will have to be if the world is to avoid catastrophe.

The world cannot wait for the capitalist states to enact adequate constraints on greenhouse gas emissions. The test will be the global resistance becomes a coordinated force for system change. 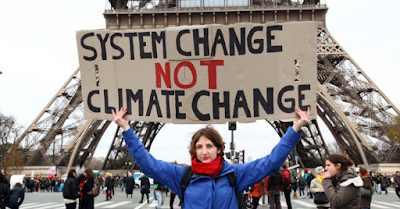 Posted by ajohnstone at 2:43 am