Nearly one in five of  -- 40 million American adults -- suffer from anxiety disorders.  "Surveys show that stress levels here have progressively increased over the past four decades," says Paul J. Rosch, MD, Chairman of the Board of The American Institute of Stress. For adults, jobs are the leading source of stress, says Rosch, who points out that work-related anxiety has multiplied in recent years -- both for the unemployed and the employed. So many companies have down-sized and so many industries have shrunk that employees who manage to hold on to their jobs are expected to work longer hours; they have more and more to do, and less time to do it to their satisfaction. Those at the top sometimes fail to understand how much their wealth and power are a function of their environment. Often those who are privileged compared to the very poor, do not recognize or acknowledge these advantages and often mistakenly attribute their 'success' to individual merit alone, mistakenly exalting the rich and condemning the poor

Despite the fact that most Americans believe our country is still The Land of Opportunity, the greatest meritocracy in the world, the United States is actually a terrible place for fortune-seekers. Chris Hayes, author of the new book Twilight of the Elites: America After Meritocracy, notes that when citizens of different countries are polled about their perception of how easy it is to start off poor and work their way up to wealth, "the U.S. is near or at the top in terms of people who say 'yes.' And yet it is also near the bottom in terms of actual social mobility." In other words, as Hayes argues in his book, America isn't truly a meritocracy. Sure, the Civil Rights movement, feminism, and equal opportunity laws have helped to remove many of the barriers to success -- but people at the top tend to stay at the top, from clique to clique, and generation after generation. "Those who climb up the ladder will always find a way to pull it up after them, or to selectively lower it down to allow their friends, allies, and kin to scramble up," Hayes writes."The idea that we are a meritocracy is a vast oversimplification, a self-serving and self-justifying one," says Hayes. "If you believe that the model is that those who are smartest and hardest working end up with the most power or the most lucrative jobs, then ... one conclusion to draw from that is that the people currently occupying those positions must be meritorious, which I think is an insidious myth."

Sociologist Stephen McNamee makes some similar points in his 2004 book The Meritocracy Myth, though he emphasizes the circumstances we are born into as a determining factor in where we'll end up. "The race to get ahead is a relay race in which we inherit a starting point from our parents that in itself creates huge inequalities of opportunity unrelated to the merit of discrete individuals, including, and especially, unequal access to educational opportunity," McNamee explains. Being born to wealthy, powerful, or well-credentialed parents doesn't just help to ensure an individual will have elite educational experiences; his childhood and college experiences in turn ensure that he will make important social connections and fit in culturally, multiplying his chances for unusual success. The idea that we can accomplish anything we put our minds to is so pervasive that we often have a lot on our minds. We feel pressure to take on more responsibilities and to make the "right" choices -- and we beat ourselves up when we fail. As McNamee puts it: "A reasonable argument could be made that the race to get ahead in America is particularly stressful. If Americans believe that individuals 'get what they deserve' based on their merit (innate abilities, having the right attitude, working hard, playing by the rules), then distain for the unsuccessful is seen as warranted." There's this idea that we're a meritocracy, that people reach the top through the virtue of hard work and perseverance. But the flipside to that thinking is that the poor ... must be flawed, lazy, stupid, or whatever other terrible adjective you would like to use. They didn't work hard enough in some kind of way but had every opportunity. We don't all have the same options, but many at the top tend to assume we do, despite how much the conditions that we are born into delimit and affect all kinds of subsequent decisions -- like whether or not we'll go to college, what kind of school we'll go to, and what type of work we'll do. Not everyone has the same choice set or the opportunity to choose among good alternatives,

This cultural preoccupation with success as a reflection of worthiness means that decision-making is particularly stressful for us. Our decision-making anxiety is exacerbated by our tendency to imbue all sorts of decisions with vital importance. Having to make too many decisions on a regular basis can stress us out, as can the wild abundance of options we have to choose from. "Too much choice can paralyze people and make them anxious," says Stanford psychology professor Hazel Markus. "It used to be good enough to send your kid to preschool or to college. Now you have to choose the perfect one -- and then the perfect teacher and extra-curriculars -- or you are a failure as a chooser, as a mother, as an American." Markus adds "Good choice is not evenly distributed throughout society, so beating people up for making bad choicies is unfair. And yet, because we believe we live in a meritocracy, we often do just that -- and beat ourselves up for it, too."
All this isn't to say that many true underdogs haven't managed to achieve exceptional things. Some individuals do overcome adversity and beat the odds. But success stories often involve a substantial amount of luck, as much as merit. Moreover, exceptions do not prove the rule. Individuals win the lottery but that does not change the fact that the odds of doing so are very remote. When using meritocracy calculators to assess achievement, we often overlook or dismiss how much luck can affect lives. Merit hard liners downplay the effects of luck. But the imperfections and ultimate uncertainty of both the stock market on Wall Street and the labor market on Main Street add an undeniable element of luck into the mix. Major structural changes in the U.S. economy such as de-industrialization, automation, and globalization have displaced workers quite independent of the merit of individuals. The historical decline in self-employment and the concomitant rise and dominance of large oligarchic corporations (including chains and franchises) have created barriers of entry for starting and sustaining small businesses and sharply reduced the entrepreneurial path to mobility.

There's a much darker side to meritocracy. If the successful merited their success, it necessarily followed that the failures had to merit their failure. Low status came to seem not merely regrettable but also deserved. To the injury of poverty, a meritocratic system now adds the insult of shame. That, and the pain of anxiety. 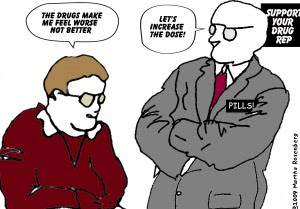 Full article here
Posted by ajohnstone at 2:07 am