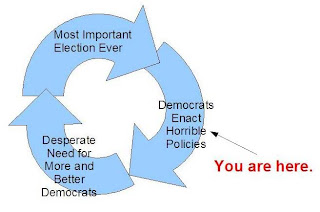 Associated Press surveyed more than a dozen economists, think tanks and academics, both nonpartisan and those with known liberal or conservative leanings, and found a broad consensus: The official poverty rate will rise. There may not be the 1930s images breadlines, such as those seen during the Great Depression. However, 50 million Americans are enrolled in the nation’s food stamp program. And  there are also hundreds of privately-funded charity soup kitchens across the US. Some point out that there are no "Hooverville" tent camps, such as those seen during the Great Depression, but again they are wrong. There are hundreds of tent camps, scattered throughout the US

Poverty is spreading at record levels across many groups, from underemployed workers and suburban families to the poorest poor. More discouraged workers are giving up on the job market, leaving them vulnerable as unemployment aid begins to run out. Suburbs are seeing increases in poverty. Millions could fall through the cracks as government aid from unemployment insurance, Medicaid, welfare and food stamps diminishes. Today's minimum wage is epic in its injustice and Dickensian in its cruelty. It's a shame that Dickens himself isn't here to write about it. America's large corporations: They're Ebenezer Scrooge, rebranded and publicly traded. The life they've decreed for their workers would be all too familiar to the Cratchit family - especially Tiny Tim.  92 percent of the 50 largest low-wage employers in the country were profitable last year. And they've more than recovered from the recession: 75 percent are collecting more revenue, 63 percent are earning higher profits, and 73 percent have higher cash holdings. They've got the money. They just don't want to spend it on labor costs. Big corporations tack on a lot of overhead for their total employee costs - costs which includes those overpaid CEOs, along with their jets, and other perks, as well as more legitimate expenses for centralized corporate functions like purchasing, administration, and IT. There are also other fixed costs attached to employing someone, including insurance, physical housing, and utilities. While most of us continue to struggle Wal-Mart profits grew by 23 percent. America’s largest employer Wal-Mart doesn’t pay living wages, nor does McDonald’s, Taco Bell, KFC, Pizza Hut, and so forth. Perhaps this might be one factor accounting for record profits generated by these firms during a time when so many consumers are struggling just to get by. After all, the largest expense for corporations comes from the labor force. For US-based corporations, this expense keeps shrinking due to layoffs, benefit cuts, and outsourcing.

Four in ten households in New York City are forced to subsist on low-wages and over one-quarter of workers in New York City earn below $25,000 per year. Across the city, families are forced to choose between rent, food, and healthcare. A family making minimum wage is forced to subsist below the federal poverty line. After years of  layoffs and high rates of unemployment, wages and benefits are being cut. On top of that, workers are working longer hours without overtime pay, health insurance or any retirement benefits. For decades, corporations, banks, and the ultra-wealthy have reaped financial rewards from America’s bubble economy at the expense of working-class Americans. During this stretch, the majority of the gains from US productivity have been disproportionately distributed to the top income earners. Over the years, these inequities have accumulated into an ever-increasing wealth and income disparity. Now that the illusiveness of America’s bubble economy has been revealed, millions of Americans remain jobless; many without hope. Millions of Americans have lost their jobs, their homes and any dream they had for their future at the hands of capitalism. Yet, they have done nothing about it. It’s business as usual in the United States. We, the victims have been told we will be responsible for cleaning up the mess created by the capitalist class. For us it will be austerity. Pensions have been slashed, taxes have been raised, jobs have been cut, while Social Security, Medicare, and Medicaid are on the chopping block. For most Americans, who have managed to keep their jobs, the situation has not been anything to cheer about. Since the financial crisis, US workers have seen the smallest wage increases since 1965. After adjusting for inflation, there have been no increases in median wages since 1999.

The minimum wage has dropped 30 percent - almost a third - since 1968. Unlike some other government rates, the minimum wage isn't automatically adjusted for inflation. Bills which raise it have to be submitted by courageous politicians, and then other politicians must resist big-business interests to vote for it. Many people assume that most minimum-wage employees work for small, family-owned businesses. But a new Data Brief from the National Employment Law Project finds that 66 percent of low-wage employees work for companies with more than 100 employees. That includes a handful of very large corporations which collectively employ nearly 8 million low-wage employees. The largest of those mega-corporations is, unsurprisingly, Wal-Mart, with 1,400,000 employees. The next-largest is Yumi Foods, which owns Taco Bell, Pizza Hut, and KFC. After Yumi Foods comes McDonald's. Also on the list is Staples, the corporation where Mitt Romney boasts that he "created jobs" before his retroactive resignation from Bain Capital. These are "job takers," not "job creators." Wal-Mart and most other corporations on the low-wage list, doesn't really "create" jobs. Smaller enterprises of all kinds are crowded out by the unchecked growth of mega-corporations, which often use their volume to undercut the locals on price until they're driven out of business. Then they raise them again. In other words, Staples and the other giant corporations are taking those jobs from other businesses - those Mom and Pop shops which will soon vanish into American folklore.

Corporations like Staples are masters at "marking down" the value of their employees. Average Staples salaries for job postings nationwide are 51% lower than average salaries for all job postings. Among those employees, you'll probably find the "Moms" and "Pops" which Staples put out of business. Staples, where a jobs website reports that cashiers make $8.17 per hour, so-called "Easy Techs" make from $8.76 to $9.08 per hour, and the highest paid reported job ("Easy Tech Expert") pays an average of $10.28 per hour. If these employees work full time (not all of them do) they earn anywhere from $16.340 to $20,960 annually. The poverty line for a family of four is $23,050. Nevertheless, top executive compensation averaged $9.4 million last year at these firms, and they have returned $174.8 billion to shareholders in dividends or share buybacks over the past five years. The losers in all this are the workers, the very people who are creating value for these companies.

Politicians bury problems in platitudes and boasts. Today, four years after the financial crisis, not one single Wall Street executive, government official, or banker has been indicted for their role in destroying the global economy. It’s business as usual on Wall Street. Insider trading, money laundering, tax evasion totaling hundreds of billions if not trillions of dollars, continues to escape detection by industry regulators. Goldman Sachs got away with blatant securities fraud to the tune of billions of dollars.  Goldman Sachs got away with a slap on the wrist; a small fine relative to the amount of money it made. Obama’s presidency was bought and paid for by Wall Street since Goldman ponied up the most (private-sector) money for his presidential campaign, with several other banks not far behind. Wall Street continues to laugh all the way to the bank, while Washington and the media provide them with cover. The vast majority of Americans are now faced with reduced living standards that can no longer be masked. Meanwhile, those in Wall Street party on. It’s time for some real change. It is time for real socialism.
Posted by ajohnstone at 2:39 am