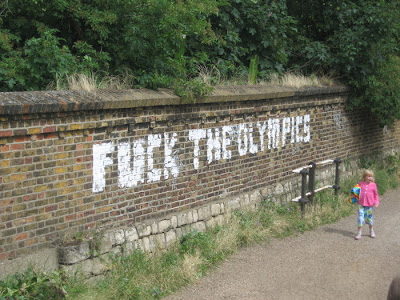 The super rich dock their yachts for the Olympics.

Octopus, the The 414-ft. luxury $200 million super-yacht that belongs to Microsoft co-founder Paul Allen, berthed at  the weekend. Alongside was the Ilona, a $120 million super-yacht owned by Frank Lowy, one of the founders of the Westfield shopping mall group. Eclipse, Roman Abramovich’s 557-ft. yacht with two swimming pools, a helipad, and bullet-proof windows — it’s believed to be the world’s biggest yacht — is due to arrive anytime.  The Maltese Falcon, which is owned by Greek tycoon Elena Ambrosiadou, is expected to arrive soon as well.  Up to 100 superyachts are due to arrive. A 230ft superyacht will cost £64,000 for  two weeks of the Games in mooring fees alone.

The Olympics is, of course,  all about sporting achievments? David Cameron has emphasized how important the meetings are to promoting brand Britain. “The Olympics will not only bring the world’s best athletes and thousands of sports fans to our country, but the major business players are coming too,” he said in April. “This once in a lifetime occasion will provide U.K. companies with more than a billion pounds business opportunity.”
Posted by ajohnstone at 3:39 am