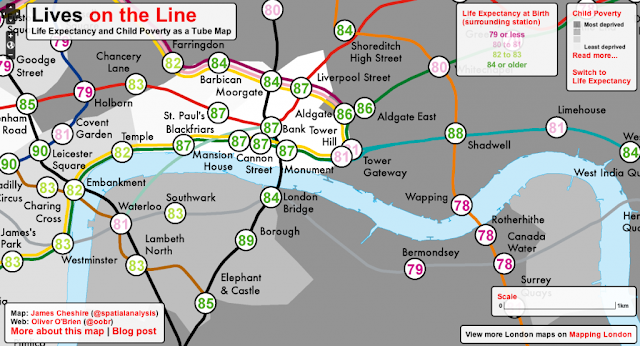 London researchers have published a new map revealing a relationship between child poverty and life expectancy in their blog. The 20 minute journey from Lancaster Gate and Mile End on the Central Line sees local life expectancy decrease by 12 years, and the short hop from Pimlico to Vauxhall on the Victoria Line sees a 6 year drop.

The general rule is that if their families make less than £16,190, then children are eligible for school meals. The number of eligible children taking the meals has increased four years in a row. One-in-seven schoolchildren (more than a million pupils) now eat for free at school, according to the Children’s Food Trust. Another 40,000 kids have been added to the list since last year. An estimated 2.2 million schoolchildren live in poverty. "Without significant social change . . . the fates of many children living in the poorest parts of London are seemingly already sealed,” wrote the creators of the map in a blog entry today, titled “Lives on the Line: Life Expectancy and Child Poverty as a Tube Map.”

In Canada, the Code Red project in Hamilton discovered a 21-year difference in life expectancies between low- and high-income neighbourhoods.

So, it appears that not all people will share in the gains to human longevity. 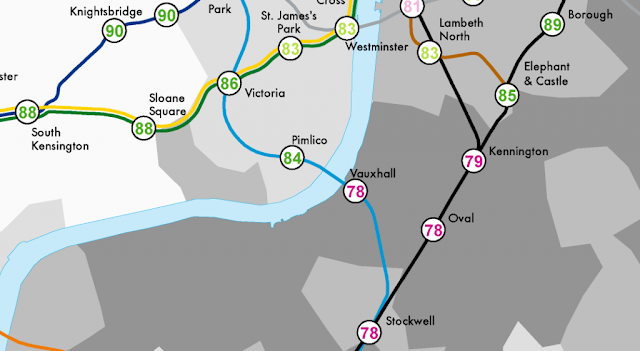 Posted by ajohnstone at 5:24 am