The Senators of War - bought and paid for 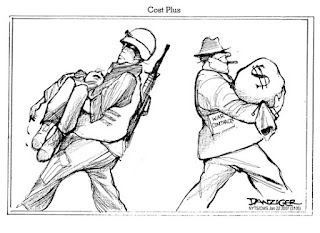 The US domestic gun lobby has already spent over $12 million on lobbying and given at least $1.1 million to members of Congress in this election cycle, 98 percent of it to Republicans. The gun lobby also wields power over Democrats through lobbying and public relations, and the threat of targeting individual Democrats who take a public stand for gun control.

The U.S. arms makers spend far more money on lobbying and campaign contributions: $162 million on lobbying and tens of millions in direct funding for members of Congress so far in the 2017-18 election cycle to keep the guns firing, the missiles flying, the bombs falling and to keep the cash flowing to the military-industrial complex.

The armaments industry have traditionally contributed more to Republicans than Democrats  but Senate Democrat hawks play a critical role as swing votes to keep the country at war. Many  regularly vote for record military budgets that hand over the lion’s share of U.S. tax revenues to war profiteers.

49 Democrats and Independents in the U.S. Senate have raised $5 million dollars in direct campaign contributions from the war industry, plus an additional $2.3 million for their “Leadership PACs,” from which they distribute funds to other corporate politicians and candidates. That amounts to 44.5 percent of the war profits Lockheed Martin and other weapons makers have reinvested in the U.S. Senate in this election cycle, compared with $9.1 million, or 55.5 percent, to the 51 Republicans.