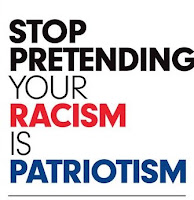 The media has on a number of occasions provoked panic among the public about refugees, often using metaphors such as “deluge” or “flood” which has considerably distorted the scale of the issue.  The media and the political mouthpieces of capitalist ideology have done their job well. Workers are being caught up by "patriotism". The patriotism of the capitalist class is better called national chauvinism. This "patriotism" equates loyalty to the nation with loyalty to the capitalist-controlled government and its policies. It seeks the acquiescence of workers in the crimes, aggressions, depredations and depravities of the ruling class and its agents.  It is intended to trick workers into sanctioning whatever is deemed in the interests of the business class. It's nationalistic baloney asserts that our interests as a “nation” are totally bound up with, if not identical , to those of our exploiters. It is all too easy to blame refugees for causing problems such as unemployment, bad housing or crime.

The UK is not the  soft-touch for asylum seekers that politicians try to make out. The UK immigration system is extremely tough. Refugees aren't here to take advantage of the benefit system and steal our jobs. Refugees do not get large handouts from the state. As they await a decision on their asylum case they receive 30% less than those on Income Support (the minimum amount that a person can reasonably live on in UK according to the government themselves). Though many would love to refugees are not permitted to work. Statistics show there has been no refugee crime wave and that there's no established connection between asylum and increased crime rates. In fact, asylum seekers are more likely to be the victims of crime than the perpetrators. There has been an increase in the number of violent attacks on asylum seekers as a result of their negative portrayal in the popular press.

What an extraordinary notion it is that the world's rulers possess the right to tell us which bit of land we should live on? Nationalist feelings arise because of the incessant propaganda of the ruling class in each country to persuade the working majority that they are in some way essentially different from and superior to everyone from other countries. The apologists for capitalism who try to foment ill-feeling towards "foreigners" landing here, whether they come to escape persecution, or to obtain slightly higher wages, never attack those many members of the upper class, including many newspaper proprietors and football club owners, who swan about the world as if there were no such thing as borders and visas. But then, in a capitalist society, you can't really expect the rulers and the ruled to be judged by the same standard, can you?

The wailing in our country about the "refugee invasion" has been long and loud.  Native-born workers feel imperilled because...they are imperilled. These are boom times for the employing class, but for all others are being squeezed. It's this economic vulnerability that anti-refugee forces play on. But pointing to refugees and blaming them for the economic pain local people are feeling is a lie. The truth is that even if there were no asylum seekers the misery that is felt would remain, for asylum seeker are not the ones who:

Downsized and offshored jobs
Stagnated wages and created zero-hour contracts
Reclassified employees as "independent sub-contractors" in the gig economy (Uberisation) leaving them with no benefits or labour rights.

Powerless and vulnerble refugees didn't do these things. The rich did.


Unique amongst all political parties, left or right, the Socialist Party has no national axe to grind. We side with no particular state or government. We have no time for border controls. The world over, workers must do what they can individually and collectively to survive and resist capitalism. In many parts of the world that means escaping political tyranny or economic poverty. Workers should try and resist taking sides. We must not blame another worker for our poverty.