The U.S. Supreme Court on Wednesday dealt a blow to worker rights, ruling 5-4 that public sector unions cannot collect so-called "fair share" fees that help unions represent all workers, including non-unionized ones. The Janus decision could lead to weaker unions, lower wages for government workers, and poorer public services. The case takes its name for Mark Janus, the federal employee who argues that, as a non-member, being forced to pay the “fair share” dues (less than what a member pays) of the union that negotiates his contract violates his free speech rights because he disagrees with the political positions his union takes. This is despite the fact that fair share dues cannot be spent on a union’s political activity.  The Janus decision has nothing to do with protecting the free speech rights of individual employees. Existing law already had safeguards protecting the rights of non-members, and non-members can and do opt-out of contributing to the cost of political activities of public-sector unions (which are largely lobbying efforts to secure greater funding for popular public services). The sole intention of the shadowy right-wing groups behind the Janus case is to further weaken unions.

The Trump administration frequently claims to be on the side of the little guy, but it is building a strong track record of harming workers and working families. The Trump administration has aggressively rolled back a 2016 rule strengthening overtime protections for low- and middle-income workers, and took steps to gut regulations that protect restaurant workers from having their tips taken by their employers.  The real beneficiaries of the Janus decision are far-right, anti-union groups and their billionaire paymasters. We desperately need stronger public- and private-sector unions in the US, not weaker ones.

According to Celine McNicholas, director of labor law and policy at the Economic Policy Institute, the impact of the ruling is that "workers who wish to join in union will be forced to operate with fewer and fewer resources. This will lead to reduced power—at the bargaining table and in the political process. It will have profound implications for not just the 6.8 million state and local government workers covered by a union contract, but all 17.3 million state and local government workers and indeed for every working person throughout the country."

AFSCME stressed that the case should serve as "a rallying point" for workers and union members nationwide. "America needs unions now more than ever," said Lee Saunders, president, of the union. "We are more resolved than ever to fight like hell to win for our members and the communities they care so much about."

The decision ushers in “right to work” style conditions for public employees in states across the nation. These anti-union measures originated in the Jim Crow South as a means of undermining unions who were organizing black and white workers together in the same shop. Predictably, Koch brothers groups–such as Americans for Prosperity, the American Legislative Exchange Council (ALEC), and the State Policy Network–cheered the ruling.

The case involves the obscure technical issue of agency fees. In over 20 states, even if public sector workers do not want to be represented by a union, they must pay agency or “fair share fees” to cover the cost of their representation. These fees were ruled fair and constitutional in 1977 by the U.S. Supreme Court in the Abood decision, to prevent a “free rider” problem and because unions are legally required to represent all workers in a bargaining unit. The fees fund the unions’ collective bargaining process and other services they provide to state workers; they cannot be used for political action. Justice Alito wrote that the free rider problem was not a “compelling state interest.”

Randi Weingarten of the American Federation of Teachers had previously stressed this point. “Rarely is there a situation where a next-generation Supreme Court overrules or changes precedent of a unanimously decided opinion. This is a completely ideological movement to end unions as we know it and to redefine the First Amendment as a weapon against people."

“This is probably the most relentlessly anti-democratic and specifically anti-worker court since the ‘Lochner Era’ of the late 19th and early 20th century,” University of Wisconsin Law Professor Joel Rogers told the Center for Media and Democracy.
“But Janus shows it’s arguably worse, since it doesn’t even respect freedom of contract. This Court doesn’t stand for the ‘rule of law,’ which means putting constraints on the arbitrary and abusive use of power. It’s ‘let’s concoct a legal justification for giving abuse a free rein,'” said Rogers. (The 1905 Lochner case held that limits on the work day or work week violated the Constitution.) 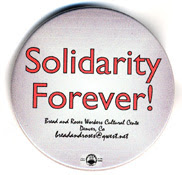 “This is a concerted, corporate-funded effort to get rid of public employee unions–to stop them from advocating for higher minimum wages, affordable healthcare or a right to paid sick leave, to stop them winning wages and benefits that force private sector employers to raise their own wages, and to stop them from insisting on a level of public services–schools, libraries, transportation and more–that we all have a right to just by dint of being citizens,” said Gordon Lafer, a professor at the University of Oregon’s Labor Education and Research Center.
Posted by ajohnstone at 1:07 am