The whole referendum is a huge irrelevancy and a waste of time. Our limited part in the campaign has been attacking those calling themselves socialists who are on the Leave side, for encouraging nationalism. In terms of the working class, the vote won’t bring socialism closer, either way, so as a class we have no specific interest in the vote. We can envisage that some workers may feel they have an interest in staying in, for instance if your job is working for the EU, or if you are in a post financed through the European Social Fund, similarly there may be those who think they may directly benefit from a withdrawal, Border Agency staff may envisage getting more overtime if we withdraw, but as a class we have no interest. Beating the anti-foreigner drum seems to be paying off. A bit disturbing. The bigots and xenophobes who seem to be swinging the vote will be disappointed, though. Even in the event of a Leave vote there will still be immigration (as British capitalism needs more workers if it is to keep growing), only it would be "controlled". This would add a new category of "illegal" immigrants too, from Eastern Europe (in fact from anywhere in the EU) to join those from Asia and Africa. The section of the police and border agency staff dealing with this will have their workload doubled (at least) as will the profits of the people smugglers.

Many capitalists financing the Leave campaign are not "petty bourgeois" but mainly filthy rich financiers who don't want their activities to be regulated by the EU. They are regulation dodgers. Workers would be complete mugs to pull the chestnuts out of the fire for them. The main debate, in our opinion, is between National (relatively small capital) and multinational (relatively large capital). For those capitalists trading largely with the UK, the EU generates extra cost through regulation, etc. so they tend to be in favour of withdrawal. For multinationals the EU provides a huge standardised market and they tend to be in favour of staying in. Historically big capital wins out against small capital. Both sides are being criticised for exaggerated and unsubstantiated claims, but what do they expect? The protagonists on both sides are professional politicians used to telling lies and making false promises. They are not going to change their spots just because it's a referendum and not an ordinary election. All this is grist to our mill.

Paul Mason made an interesting point: it doesn't make much difference if UK stays or goes, there is now a two-speed Europe, and the Euro/Schengen countries will continue to integrate without Britrain.  It is in effect a complete waste of time and effort to vote at all in this farce, which is just a huge distraction from real issues of poverty, housing and human needs. Calling on people to stay away in their droves is a clear message, but our policy of write-in votes is about building the party's support.  We don't see how much change either in or out can make.  Any new 'free trade treaty' would have to inlude some element of free movement (no government wants those ex-pat Britons being repatriated); there'll have to be some sort of arbitration in any free trade treaty.  This really is one for the passing show.

Of course, British capitalism will survive in the event of an OUT vote and adapt, probably ending up like Norway (with access to the single EU market but no say in its rules) but, given its economic weight, something less unfavourable maybe. It wouldn't be the end of the world for them even if it doesn't make complete economic sense from their point of view. The EU referendum is just another political and economic argument amongst the boss class. The case for voting Remain is stronger than the case for voting Leave but not strong enough for suspending our view that the "lesser evil" is not a valid argument for making a choice between two capitalist options. In or out of the EU does not restrict the class struggle.  And we don't say it’s "nothing to do with me" what we are saying is to abstain from the bosses struggle(s) and support the struggle for socialism.

We don't think leaving the EU will see a bonfire of workers' rights, no matter how much Labour Remain likes to say so; the truce in class struggle these 'rights' represent is in the interests of the masters, as much as the workers.  Some international trade treaties, such as the deal between the EU and Canadia mandate ILO standards, so there's no reason why future trade deals might not do the same.  Also, there is the element of democracy, that relying on supranational bodies to inhibit government action is not healthy, it's likely that any government that does go for a bonfire of employment rights will find itself heavily voted out.  Further, it's most likely the UK will remain within the EEA, which will also mandate worker's rights. Our position of calling for an active refusal to settle disputes within the ruling class is the right one. We actively oppose the notion that any constitution of government or nation states is a solution to the problems workers face inside capitalism. We endorse the stance workers in France have taken recently in opposition to reductions in their working standards. "Workers rights at work" is not a key issue in the EU debate. They're basically nothing to do with the EU but with what workers in their unions can stop employers getting away with. Certainly, the EU doesn't seem to be effective in preserving workers rights in France. No, the only two arguable reasons for voting Remain are the two that have been aired:
(1) to maintain the free movement of labour and
(2) to protest against the xenophobia behind the Leave case. People will make up their own mind how much weight to attach to these.
Even in the event of a Leave win, the free movement of labour stands a good chance of staying. British capitalism needs free access to the single market and there's no chance they are going to get this unless they agree to the free movement of workers.

Britain withdrawing from the EU may give an elected government here more formal control over what it decides but not any more real control as it's not governments that control the way capitalism works but the other way wrong as governments are forced to give priority to profits and conditions for profit-making. As a capitalist trading nation on its own outside a bigger block Leaving might even give the government less control. The argument is also based on the illusion of "reformism in one country" which has tried and failed many times. You can't fight capitalism exclusively in one country. For the same reason you can’t have "socialism in one country" despite what the Stalinists say. This strand of leftism that has been drawn to state capitalist versions of what it misleadingly calls socialism has been a constant source of confusion from the word go.
The referendum debate, if nothing else, is bringing all sorts of things out of the woodwork. Nationalistic claptrap inspired by nationalist sentiments have got sod all to do with socialism and are anathema to everything socialists stand for.

Some left-wingers place themselves in the Leave camp on the specious ground that this would enhance "popular sovereignity" and "democracy in one country" Even if it was the case, what difference would a slightly enhanced political democracy in Britain make? The traditional leftwing/Social Democrat policy of "reformism in one country" has always failed, one reason being, precisely, the international nature of capitalism. Which would remain the case and in the end force any breakaway UK government to put profits before people to maintain or enhance British capitalism PLC's competitiveness on world markets, which has been the fate and experience of all Labour governments here.

If British capitalism left (and if it is decided not to protect UK farmers – a big IF) there would be lower food prices. But this would not benefit workers. Lower food prices by reducing the cost of living would lead to lower wages, leaving workers in the same position as before. So, while this might earn them a point against the Remain camp, it cuts no ice from the working class point of view.

We are not going to waste valuable time advocating versions of capitalist management over workers there are too few socialists as it is. 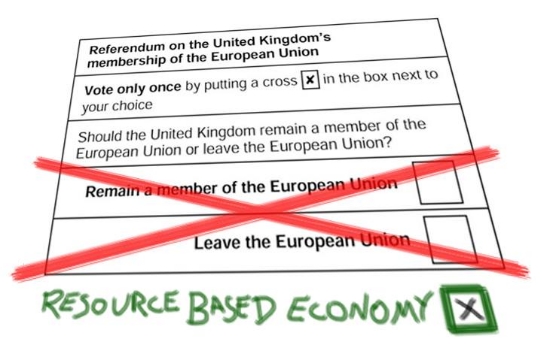