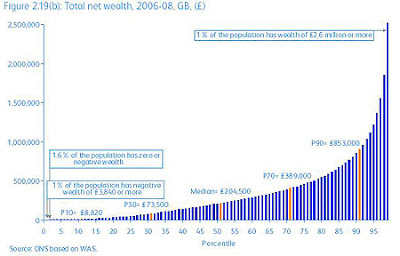 Following on from this previous post , it is now reported that the latest comprehensive snapshot of the nation's finances reveals that the richest people in the country have grown their share of Britain's total wealth, despite pledges to tackle inequality.

The Office of National Statistics Social Trends report shows that the top 1% of the population control 23% of the country's cash, property and assets.

The richest tenth of the country have total average wealth of £3,954,900

That the poorest tenth of the country had a net wealth below zero between 2006 and 2008, with minus £500 to their names after debts were subtracted from their physical and pension wealth. And they are likely to be even worse off now, as people saw the value of their earnings and assets fall by 15% in the recession year of 2008.

Earlier this year, a Government commissioned report, showed Britain's wealthiest 10% of the population were almost 100 times richer than the poorest 10%.
Posted by ajohnstone at 9:39 am