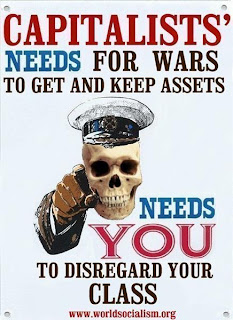 SOYMB came across this informative and enlightening article from a Canadian peace journal about NATO's war in Afghanistan. We highlight extracts below that reflect much of the socialist case against wars.

Canada’s official objective is “to protect Canadians by ensuring that Afghanistan never again falls into the hands of the Taliban and that Afghanistan becomes a stable, free and democratic society.” Canadian officials have offered other reasons, such as liberating women, educating girls, spreading democracy, killing insurgents, and keeping NATO from failing. Public relations efforts emphasize development; it sells well in Canada. Regional geopolitics are avoided altogether.In US strategy, Afghanistan plays a vital role. Although official reasons for being in Afghanistan relate to terrorism, the US has other goals too. It wants to ensure that countries in the region and worldwide have access to Turkmenistan’s natural gas. Richard Boucher, US Assistant Secretary of State, said in 2007: “One of our goals is to stabilize Afghanistan,” and to link South and Central Asia “so that energy can flow to the south.” In 2009, George Krol, Deputy Assistant Secretary of State, told Congress that one US priority in Central Asia is “to increase development and diversification of the region’s energy resources and supply routes.” In addition to its military bases in the Middle East, the US now has numerous bases in Afghanistan. Together they provide the United States with a military bridgehead close to the energy resources of the region.It is the continuance of the Carter Doctrine

Turkmenistan, a Central Asian country that borders Afghanistan to the northwest, is rarely in our news. Yet it has the fourth (possibly third) largest natural gas reserves in the world. (Iran is number two; Russia is number one). The planned pipeline is called TAPI, after the initials of the four participating countries — Turkmenistan, Afghanistan, Pakistan and India.Since 1991, there has been rivalry among great and regional powers for access to Turkmenistan’s natural gas. It can only get to market through pipelines.Pipelines are geopolitically important; they connect trading partners and influence the regional balance of power. Moves by various countries to gain access or control of Central Asia’s energy resources are closely watched. The Russians have a pipeline north to connect with a network serving Europe. The Chinese have just completed a pipeline east, to connect with their network and go all the way to Shanghai. The US and European Union have proposed a pipeline west to link up with a network of existing and planned pipelines to Europe (bypassing Russia and Iran). And since the mid-1990s, the US has actively promoted the TAPI pipeline south through Afghanistan to Pakistan and India, and possibly Gwadar, Pakistan’s deep-sea port.Iran, a nation that shares a long border with Afghanistan, has the world’s second largest reserves of both oil and gas. Iran has offered Pakistan and India an alternative to the gas pipeline through Afghanistan. The US position is clear. It supports the TAPI pipeline through Afghanistan; it objects to the pipeline from Iran.

In April 2008, representatives of the four participating nations (Turkmenistan, Afghanistan, Pakistan and India) signed a Gas Pipeline Framework Agreement that envisaged construction to start in 2010, supplying gas by 2015. The announced 1,680-km route would follow the ancient trading route from Central to South Asia, extending from a gas field in Turkmenistan along the highway through Herat, Helmand, and Kandahar in Afghanistan, to Quetta and Multan in Pakistan, and on to Fazilka in India. The Asian Development Bank, a cousin of the World Bank, is sponsoring the project (several countries with troops in Afghanistan — including the United States, Britain, Canada, France, Germany, Italy, Netherlands and Norway — are also active members of the Asian Development Bank). The starting date for construction is uncertain, because security in Afghanistan and the tribal areas of Pakistan remains a huge problem.

Are Canadian troops in Afghanistan to defend a pipeline route? The Minister of National Defence, Peter MacKay, was asked that on a Halifax talk show in 2008. His answer was that Canadian troops were “not there specifically to protect a pipeline across Afghanistan,” but “if the Taliban were attacking certain places in the country or certain projects, then yes we will play a role.” MacKay appears to be reiterating NATO’s position. In January 2009, Jaap de Hoop Scheffer, then NATO Secretary General, recognized that NATO is not in the business of protecting pipelines. Nevertheless, he said that “when there’s a crisis, or if a certain nation asks for assistance, NATO could, I think, be instrumental in protecting pipelines on land.” Thus NATO troops could be called upon to assist Afghanistan in protecting the pipeline. Since pipelines last 50 years or more, this could auger a long commitment in Afghanistan. Indefinite occupation is a recipe for ongoing bloodshed and disruption.

In Rising Powers Shrinking Planet: the New Geopolitics of Energy, author Michael Klare writes that global competition over energy will be “a pivotal, if not central, feature of world affairs for the remainder of the century.” Oil and gas are essential in modern economies, and petroleum is the single largest commodity in world trade. Energy wars are a distinct possibility.

Wars for resources are illegal under the UN Charter but SOYMB knows only too well that the UN Charter is just a scrap of paper. All it has done is forced governments to be even more dishonest about the reasons they go to war.Governments have to come up, these days, with plausible “humanitarian” and “democratic” reasons. The homage paid by vice to virtue. Socialists say: don’t be taken in by such propaganda. As long as capitalism lasts there will be wars, as well as government lies about the reasons for going to war.
Posted by ajohnstone at 6:26 am

That last bit about how "capitalist" nations create war for resources is not true. It should be that all kinds of countries with different types of governments do this. If they have something we don't have, we either ask first or just go straight to taking it by force. Which is what happens often.
Also, of course the UN is basically useless. =/