Do It Yourself Politics 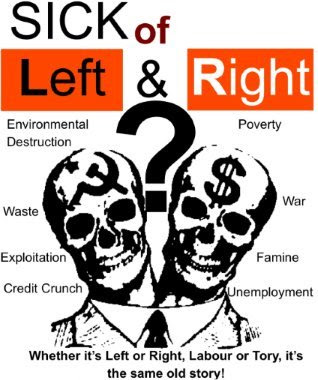 The Independent on Sunday reports that 3.5 million have been disenfranchised because they are not on the electoral roll. But there are millions of others who will not vote because they are disaffected with the mainstream parties . A poll showed 18 per cent of the electorate were "certain not to vote" – up from 11 per cent from the same time in 2005. Only 44 per cent said they were "absolutely certain to vote".

We live in a world of inequality where wealth is the real source of power, profits come first and billions are poor through no fault of their own. All communities are blighted by inequality and deprivation.You can vote for candidates who would work within this system and help keep it going. Or you can use your vote to overturn it and end the inequalities.

In present-day society government has a class nature. Government is not the even-handed arbiter , the honest broker, between business and ordinary working people, as many would wish us to believe, but is the champion of the owning class with its legal right to exploit ordinary working people. Politics becomes a spectacle in which people are just passive spectators watching the goings-on of politicians. The media - especially TV - play to this, presenting politics as a soap. But it is not even a good spectacle. It’s boring and the actors are all second and third rate.The end result is that politics in seen as completely boring and that people don’t want to know about it, except perhaps in the few weeks before a general election. People know that voting doesn’t change anything and that the only power they have is to vote for a change in the management team, while their day-to-day lives are unaffected and unchanged. People become apathetic, resigned and cynical.Conventional politics is based on the illusion that what happens depends on what the politicians in power do; that politicians really do control things. But this isn’t the case. It is the way society is organised to produce things that is the main factor determining the way we live and what happens - and what doesn’t happen. In other words, what is important is the sort of social and economic system we live under, not which party of professional politicians controls the government. That’s why changing governments changes nothing.

The capitalist class, by virtue of its monopolistic ownership of society’s means of production and distribution, dominates society politically and has shaped all institutions, customs and social behaviour to give expression to its own interests and safeguard its continuing mastery over the world and its people. The meaning of ‘democracy’ has mutated from a process commonly understood to mean the ‘rule of the people’ into a device that does no more than elect a ‘safe pair of hands’ to protect private property and control social and political life to perpetuate this class domination.

That is not to say that ordinary working people should turn their back on the electoral system as such. Socialists have long argued that the capitalists' need for an elected machinery, that necessarily requires the active involvement and support of the workers, means that we can organise as a class to take control of that machinery to bring an end to their system. Once the world’s working people demand socialism, the electoral system can be utilised to effect the revolutionary act of abolishing capitalism by signalling that a majority of ordinary people fully understand and want to effect that change. We therefore value election campaigns and political representation only in so far as they are a means for rousing the workers to full class consciousness. So we should not be fooled by the myth that there is no alternative to capitalism, that it will always be with us. It will not, it is true, simply collapse. But its structure rests primarily on the effective control of public thought aimed at persuading people that the society that exists is ‘good’ and works in their interest. When ordinary people decided to end the misery and change society the numerical superiority of ordinary working people will make their demands unstoppable.When more and more people realise this they will begin organising for it, in the places where they work, in the neighbourhoods where they live, in the various clubs and associations they are members of, but, above all, they will need to organise politically as a “political party” - as a “socialist party”.

Unfortunately so associated has the word “party” come to be with conventional politics that many people imagine that we, too, are proposing just another organisation of political leaders for people to follow; that we’re saying “vote for us and we’ll bring in socialism for you”. But we’re not.

By “socialist party” we mean a party of people who want socialism, people organised democratically to win control of political power for socialism. A mass socialist party like this does not yet exist, but it is our view that, for socialism to be established, it should. Without having any delusions of grandeur, we try to organise ourselves today in our small party in the same way we think that a mass socialist party should organise itself: without leaders and with major decisions being made democratically either by a referendum of the whole membership or by a conference of mandated delegates and other decisions by elected committees.
The “socialist party” would be a mass movement of people who wanted socialism, not a party of professional politicians or a party of professional revolutionaries or even of people who wanted to serve the people.A mass socialist party would contest elections. Here too, we also try to anticipate how a mass socialist party should behave. Its candidates should not seek to be leaders, separate from those who vote for them, but should be standing as delegates to be mandated by those who want socialism. This is why when we stand in elections all we advocate is socialism. Not reforms of capitalism, not promises to do things for people, as the conventional parties do.Our basic message is it's no good following leaders, whether professional politicians or professional revolutionaries. You are going to have to bring it about yourselves. The only way is to carry out a do-it-yourself revolution .
Posted by ajohnstone at 4:19 am